Finding fairly complete records of anything pertaining to personal goods from the 18th century is difficult enough on it's own, let alone finding a searchable database of it.  For that reason I am quite in love with the Old Bailey Records from London.  I spent some time each day for the last week searching through them and recording all the references to women's shoes.  I'd love to do the same for many other clothing items, but that's not a practical idea right now.

What's wonderful about these records is that they often mention the type of shoe, the value of it, and who it was stolen from.  Now, the convention of the goods belonging to the husband no matter who wore them makes things a bit difficult in the fact that they don't always say "Women's shoes", but often in those cases the wife does testify or the husband mentions that his wife's shoes were missing, etc.  I avoided marking down cases where it wasn't obviously a woman's shoe, but there were still 145 thefts (and one murder) from 1760-85 with usable material.  17 didn't mention the type of shoe, but listed value, and one was about 8 remnants of Callimanco that were stolen of a Shoemaker.

The large majority were stolen from Widows, Spinsters, Shoemakers, and Travelers.  Not surprising considering that many Widows and Spinsters rented out rooms in their homes for income.  Most Shoemakers were robbed by workers in large scale or a not-so-crafty thief slipping a pair under their apron.  Travelers lost trunks, were accosted by bandits, or didn't guard their lodgings well.

What surprised me the most were the values assigned.  Almost all were 1-3 s. a pair.  It didn't seem to matter what they were made of.  And a great deal were new, being stolen from shops.  The most expensive pair was 10 s., stolen from a warehouse of a Coachmaster.  The cheapest was 3 d., with no specification of who it was stolen from other than name.  1 s. often showed up as value for other accessories, such as aprons or kerchiefs.  Here is a listing from Daily Life in 18th-century England showing salaries of this time period (20 shillings to a pound for my American readers).  Income didn't always reflect value, however.  Her Ladyship's pair of Sattin shoes were worth 2 s., while a Maid's Stuff pair were worth 8 s..

Black was the most common color mentioned; 4 Callimanco, 3 Sattin, 1 Leather, 1 Stuff, and 1 Silk.  There were 2 Red Moroccan Leather, 1 Green Silk, 1 Green Stuff, 1 Pink Sattin, and 1 White Sattin.  Not to mention the Purple and White pair with no mention of fabric type and a Leather pair specified to have a silk heel and straps. 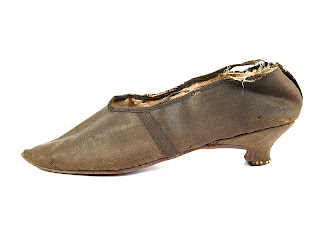 What looks like a Glazed Wool or Cotton shoe from Shoe-Icons, circa 1790s.
Posted by ColeV at 11:39 AM

What exactly is "stuff" if it was so popular? This is all very interesting and is helping me decide what color to make my new pair of American Duchess shoes... :)

This is absolutely fascinating, thank you!