Undergarments are often a problem in any good historical outfit.  They take as much time as a gown and are never seen.  This means that they are often forgotten and bypassed for sake of time and money.  Even when they aren't, knowing exactly what you need can be difficult.  When I was making up my muslin 1809 gown I already had a full set of undergarments for that time period.  Unfortunately they don't work!  One of the most difficult things about early 19th century is that fact that many gowns are completely see through.  I had a white shift, cream corset, and white underpetticoat.  While they work under my brown gown, I could see a huge color difference and even stitching in my corset.  The straps were also too far in on the shoulder and the back of the shift too high.

Shortly after discovering this dilemma, I received the V&A's Underwear Fashion in Detail.  In it they show a Regency era "bra".  Called a Bust Bodice circa 1800-30.  It had the right neckline, was at the edge of the shoulders, and would match with my underpetticoat.  I put it together very quickly, since it's of very simple design.  Now, it might have worked in a heavier fabric in beige.  However, the white was so vibrant underneath you could still see every seam.  Especially problematic considering the way the seams fall, and it's not exactly opaque on it's own. 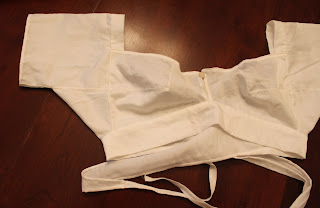 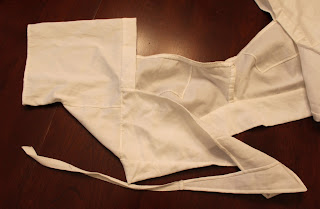 My last idea was to make a new underpetticoat that had a bodice attached.  In beige.  In the end, it worked fairly well.  I'd like to adjust the fit of the bodice front if I make myself another at some point, but it's not overly visible under my gown!  There's a drawstring in the neck and under the bust.  The buttons are just covered brass rings, very flat.

Thank you, I'm enjoying your regency posts a lot, and all your work is lovely. Is there any particular pattern you used for the corset pictured at the top, or a piece you modeled it after?

the girl in the dress said...

Very interesting! It's like how I know that I can wear this or that bra or undershirt with this or that top layer.. So, with your new bodiced petticoat, did you bone it at all? Everyone extols the "shelf effect" for the regency silhouette--did you manage to get that or did you achieve an ancient Grecian "natural" look instead?

I really appreciate this post and your dedication to achieving the right look! :)