If you haven't heard about it then you're living under a rock.  American Duchess shoes go on pre-order today!  What makes these shoes so wonderful?  They're made from a dyeable silk satin.  Up until now the only pre-made shoes in 18th century style one could find were leather, leather, and, oh that's right, leather.  Not that leather is wrong, it's just a very small section of the picture.
I've made it a goal to do a lot of research into women's 18th century shoes, since it really does seem lacking outside of the "ooh, pretty" or general history topics.  I'm hoping to spend some time in the library next week on it, particularly on the subject of what women's shoes were made from.  We know the very poor were given black leather shoes from the church.  We see plenty of poor women in art wearing black shoes (whether they are leather or a cloth isn't determinable).  But, it may be less of a representation of what actually was than either an easy way to paint shoes, or more likely a stereotype of being poor that easily communicates in that one panel image the status of that woman.  One of the first things I did in searching for commonality of materials was to peruse the Virginia Gazettes from the later half of the 18th century (mostly 1769-1779) and take a tally of all the references to shoes for sale.  Here's what I found:

There was a common mention of specifically Queen's Satin or Silk shoes (4 times) and 4 mentions of Didsbury shoes as well (some silk, some leather).  Those are both particularly renowned locations for shoe manufacturing.  One reference to leather specified Calf and Red, one Moroccan reference specified Red as well.  Calimanco had a reference to black and to green.

I also came across three runaway ads for female servants, two of which were Irish.  Two had on black Calimanco shoes, the other had on Light Blue Calimanco shoes.

I know this is only a start and not at all applicable to who exactly wore what.  It could be argued that the more fashionable shoes would be advertised, but then I would think there would be a smaller number of leather shoes listed.  And it's not like there's any where else to shop.  If you're poor you might be given shoes.  Or economical, you'll shop at second hand shops.  There was actually a separate trade, between a Shoemaker and a Cobbler, called a Translator.  They took old shoes, saved the good bits, and remade them into "new" shoes.  Second hand you'll be buying what the fashionable left behind.
While Calimanco shoes are near impossible to find, at least we now have a good source for the second most commonly advertised shoe on my list; Satin!  But, I do know of a source for Calimanco now, be it ever so expensive.  And give me a couple years of patience, there might just be a source for them yet!! 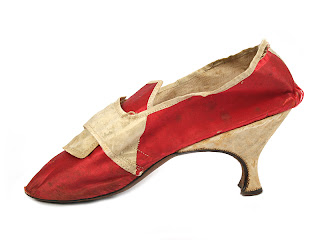 Fascinating. It's that sort of footwork that gets us to a better understanding.

Say, where on earth did you find Callimanco for sale?

(In separate news, I took measurements of the cap last night and am photographing this weekend.)

Nicole, thank you so much for posting about the shoes on your blog! It's also fascinating to see the research, especially about the various kinds of leather and what was worn by whom. Keep it comin'!

I can recommend you taking contact with June Swann as she knows a lot about historical shoes!
I like this book,
ISBN: 9789174023237

I remember discussing a really nice period painting of a woman wearing pretty mitts this weekend. I couldn't remember the name...it's "The Lady with the Veil" by Roslin. I found it at this blog: