This weekend I attended a Burnley & Trowbridge workshop on 18th and early 19th centuries.  We focused on mitts, muffs, inked bags, and calash bonnets.
Mitts, of course, are a very important part of any woman's garment collection from both centuries.  The first chilly night and a pair of warm mitts is essential!  I personally already have six pairs of 18th century mitts (unlined & lined linens for keeping off sun and mosquitos, 2 unlined and 1 lined wool for warmth, and one fancy silk pair), so I decided to try a 19th century pair this time.  These are made from the same fabric as my English back gown, a soft camlet in a pumpkin tone.  What makes these distinctly 19th century is the longer length (they go above the elbow) and the lack of point over the fingers.  I still need to add the drawstring into mine, so they don't slide down when worn. 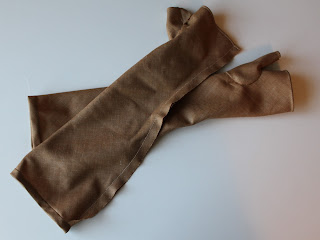 The muff I made 1780s shape.  The 1770s tended to be a slight rectangle (longer), the '80s were square, and by the 1800 point they became very elongated rectangles before becoming GIANT fur muffs after the turn of the century.  It's just a brown silk taffeta with silk ribbon trimming. 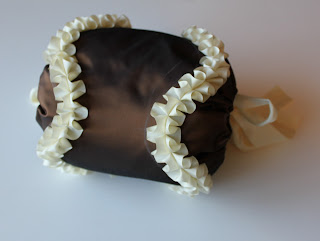 The sides are gathered in by ribbons inside of channels. 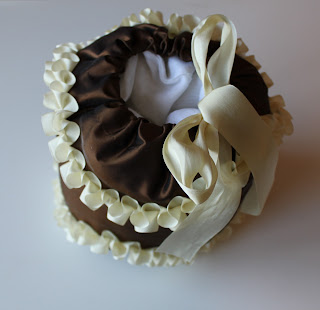 This particular muff has a separate bag so the stuffing can be recovered easily.  This means I can take an hour and make a new muff any time I like, just slipping a tube over the separate interior!  It's just made from linen stuffed with wool. 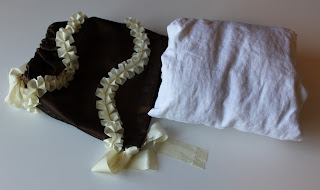 Inked bags were popular in the early 19th century.  This workshop focused on a grouping of originals found in the New England area.  Not just a local phenomenon since Jane Austen was known to have written a poem on such a bag.  They seem to have been given as friendship tokens, just like friendship bracelets today.  Very basic construction, many were two squares of cotton fabric inked and sewn together with a channeled cord on top.  The designs mimic embroidery (a perfect place to use the Ackermann designs).  The cords and tassels are just cotton crochet cord.  Mine has four sides, finishing at a point at the bottom. 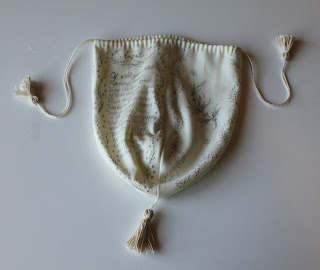 Lastly is the Calash.  Mine is not finished (not surprisingly).  I chose to line mine with rose silk, since not all greens compliment my skin tone.  Many were unlined as well.  Green and Black seem to be the prevailing colors of the 18th century.  The Calash lasted well into the 19th century, still being found up to the 1860s.  The shape changed, of course.  I'm making a very tall oval style, particular to the tall wigs of the 1770s, using 40" reeds for structure.  The shape rounded out in the 1780s.  30" and 36" reed sizes were also popular, I just wanted a BIG calash this time.  Hopefully I'll make an early 19th century one later, smaller with a few other changes I can talk about then. 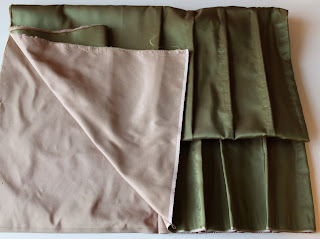 Examples of complete Calashes and other bonnets made by the Margaret Hunter Millinery Shop.  Mine will be the size of the black one when complete.  The olive Calash is an early 19th century style. 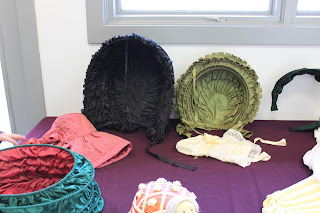 The reticule is beautiful! Very inspiring...I'll sure give this a try, too!
Sabine

Great Post! I have a question about the gloves, did you also put drawstrings at the top on your 18c century ones that just go to the elbow?

Kirsten: No, the 19th century ones have to be loose at the top few inches to go over a bending elbow. I've got more than an inch extra. Since the 18th century ones end before that they can stay fairly snug up the entire arm.

Lovely and inspiring work!I have a question about mitts too. You mentioned linen and silk... would mitts be worn in the summer? And would they be an evening or daytime accessory if so?

Mitts are an always accessory! All levels of society would wear them for many different reasons. Warmth during winter or on cool nights, to keep the sun off in summer, to keep bugs away (scented with repellents), a decorative accent to an outfit, etc. Maybe even to cover blemishes or modern day tattoos. In a time when gowns ceased at the elbow, they created the "long sleeve".