I purchased some embroidered muslin a while back, knowing I was going to make a Regency evening gown with it.  But how to make it different than all the other "white" gowns?  I started going through museums looking for ideas and found this gown from the Met, dated 1809.  Line after line of tiny tucks?  Embroidered Dorset buttons?  Sounds perfect!

I adjusted the pattern from my Brown Muslin gown.  I knew the sleeves had to be longer, especially to accommodate the tucks in them.  I wish I had made the front bodice piece wider so it would drape more, but I wasn't going to go back and do all of those tucks again.  The seam under the bodice has a drawstring in it, as do the sleeve hems. 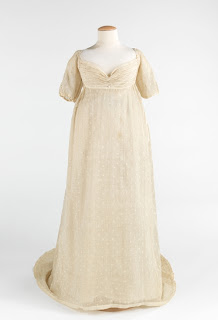 The back isn't quite small enough compared to the original, but much more and it wouldn't be comfortable on me.  I didn't grow up in stays.  I also had a shorter train.  There's still plenty to trip over, but the width of the skirt is enough that I can hold it while dancing and the hem is still to the floor. 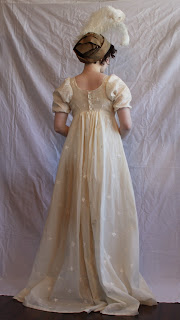 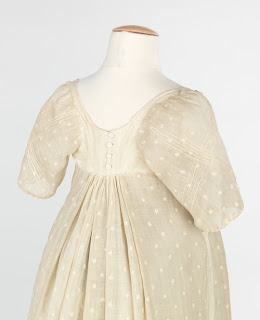 I made covered dorset buttons, embroidering a small motif in the center.  I used some batting inside of the bone ring to keep the back of the button from showing through. 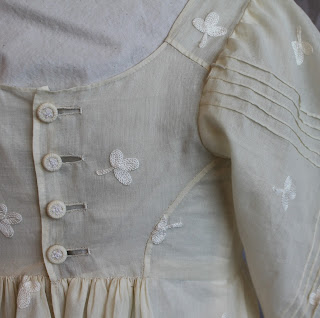 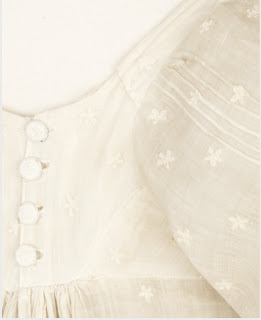 My shoulder straps are a little wide so that I'm not showing my under-petticoat or worrying about it falling off the shoulder.  There are dorset buttons on each of the straps, I used a fake buttonhole behind it.  There's also another button center front to accent the gathered portion of the bodice. 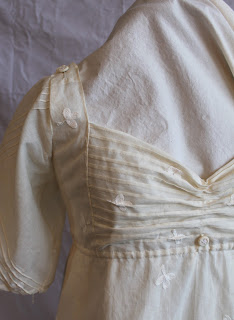 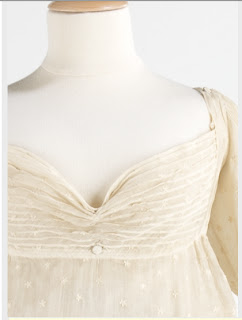 The sleeve has diagonal tucks taken, which intersect in the middle.  I actually had to go back and re-do half a sleeve because I took too large of tucks and the visual just wasn't nearly as elegant. 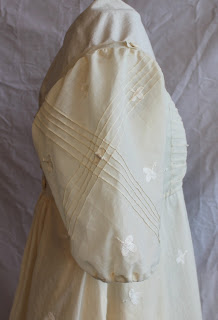 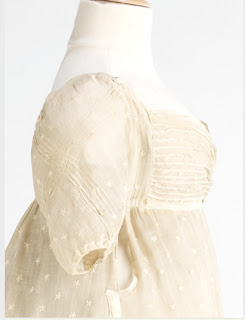 As always, everything was hand-stitched.  It wasn't a difficult project until I got to the point of trying it on.  I then realized that the fabric was far too sheer to wear the undergarments I had under it (corset, etc).  I ended up making two different undergarments for it because the first one I tried was still far too visible underneath.  But, that will be a separate post.

Amazing interpretation of the original. Beautiful from head to toe - oops - from feather to train!
Sabine

Beautiful! Love all the detailing.

WOW! That is absolutely stunning! You remain an inspiration and a goddess!! I love the turban too :-)

How lovely! Do you mind sharing close ups of the embroidered dorset buttons? I learned how to make dorset buttons at the CDC class last year...so I can't fathom embroidery to go with it!How fascinating!
Laurie

That is so beautiful! The detailing really makes it something special.

Laurie: If you click on the close back image, then expand it, it should be fairly large and clear. I just covered the rings with fabric, just like a normal covered button. I stuck a small circle of cotton batting in the ring first. Then I buttonhole stitched around the ring. Dorset buttons encompass a wide variety of styles!

Dear Nicole, goodness, you nailed that one really well. It's a really nice look on you and so fresh, and ought to be a joy to wear.

Will be curious about the undergarment issue. Paintings are so hard to interpret in this regard. What was considered "enough" coverage, and by whom, and for what occasions?

Wow - it's gorgeous! I live the way the front is done with the horizontal tucks gathered in the very center to shape the bustline - so simple and elegant!

So stunning! Your version will be mistaken in years to come for an original!

The sleeves are exquisitely
executed. Where does one
fine embroidered muslin of
that quality? A masterpiece
all around.
Gentility

The fabric is actually very inexpensive, from Reproduction Fabrics ( http://www.reproductionfabrics.com/lines.php?subcat=968 ). I'm sure the embroidery is machine done, but it's in the style of tambour work, so it's not discernible as machine.

Many thanks, Nicole. Off to
do some shopping. Very
interesting comment on the
tambour/machine observation.
Good substitute without
losing look of authenticity.
Gentility

You look fantastic in this dress! :-))

Very elegant. Its fascinating seeing how the undergarments affect the fit of the final garment.

How long did you cut the sleeves?

I just revisited this post to remind myself of your gorgeous work on this gown because I stumbled across some fabric that looks almost exactly like the original gown's (at FabricMart). It's not tambour embroidery, but they are tiny five-petalled flowers on a cream voile/gauze ground. You bet I purchased some! I'm thinking I'll try a gown in a style similar to the Met gown.