When purchasing a pair of period shoes, it's best to be as specific as possible.  The more you know about what you want, the easier the conversation and the better your chances of getting just the right pair.  No one wants to spend over $200 for something that isn't what you want, doesn't look right, or isn't correct (something I know all too well).  The options for pre-made shoes are slim, but fairly good.  None of the ones I've seen would pass as an original, but they aren't meant to.  They're modern interpretations.  How many times have you heard people bemoaning how tiny feet were "back then" or how they could never wear a pair of shoes that uncomfortable?  You can't sell those shoes in-mass to a tennis shoe-wearing public, it just doesn't make sense.  But, if you are the type, like me, who is willing and wanting a much more correct shoe (no matter the comfort), custom ordering makes sense.  But, there are even fewer options for doing that.  And, personally at least, there are none even remotely near-by.  So, here are all of the terms and specifics you'll want to make note of in ordering.  I'm covering the period of 1760-1785, all of the extant images are from the Shoe Icons site again.

Construction Method
There are three methods for making shoes at this point; turned, randed, and welted.
The yellow shoes I made were turned, literally.  Made inside out, then flipped.  The outer sole is stitched directly to the uppers.  This style is around and fashionable for all of our time period.  It is the least durable, since it cannot be re-soled and has to have a thinner sole to be able to be turned.  However, this makes it the daintiest of shoe styles. 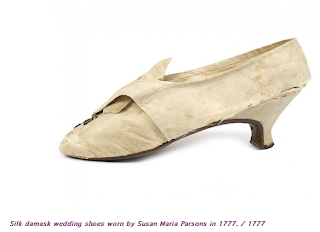 See how the sole almost blends around the edges?  These are tapered to be as narrow as possible at the edges, but thick under the foot. 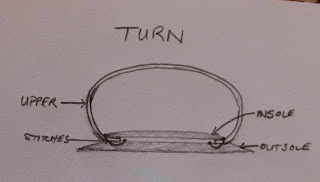 The stitches go through half the thickness of the outsole then come up through the uppers.  The insole is pasted in around the front, but stitched to the heel cover in back.  Those tapered edges are trimmed and pushed up to blend into the upper latter.
Randed shoes are losing popularity by this time period.  That's not to say they don't exist, but the English seem to use them much less commonly after 1760 (this is the only post-1750 example on the Shoe Icons site).  It makes for a much sturdier shoe, and the sole can be replaced.  The rand is stitched to the upper, then the rand is stitched to the outsole, all right side out. 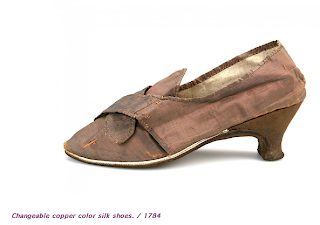 The small white strip between the uppers and sole is the rand.  It isn't always white, but that seems to be most common.

The stitches attaching the rand to the outsole are tucked in deeply enough that you don't see them without prying the uppers back.
Welted shoes are considered the sturdy shoes.  This is often how men's shoes are made (both period and modern).  Much like randed shoes, but the small leather strip is left flat, rather than folded, and the stitches aren't tucked in to be hidden. 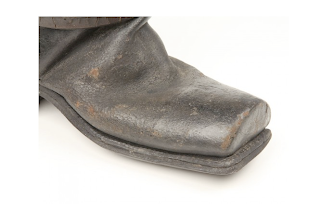 This pair of men's boots shows a very clear separation between the welt and the outsole. 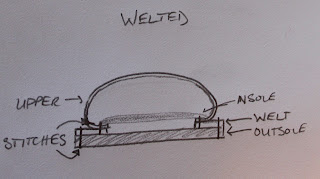 The stitches between the welt and outsole aren't hidden, making it very easy to resole this style.  And very thick on the edges.
Uppers
The uppers are made of the vamp and quarters.  Ladies shoes of this time use straps and buckles (ties are low-class until we reach the style shift of the late 1780s).  The placement and style of the seam between vamp and quarters defines the time. 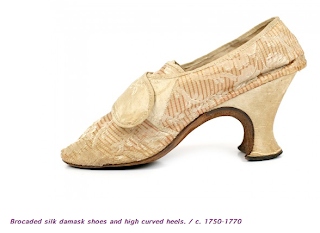 The straps cross at about the instep point, already much lower than pre-1760s styles. 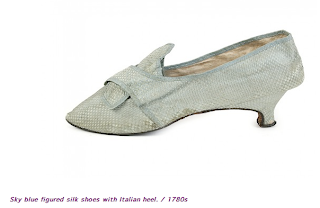 By the 1780s, the straps are even lower; the quarters are long and the vamp shorter. 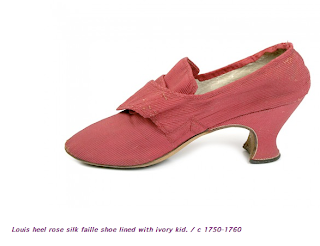 The "dog-leg" seam is also phasing out of style.
Tongues
The two options of the time are square or pointed.  Square is going out, while pointed is coming in. 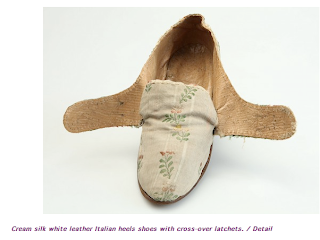 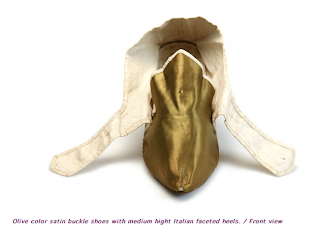 The ends of the straps tend to mirror the tongue, being rounded when square tongued or pointed for both.
Toe
The toe shape rounds out in the 1760s (after the tiny, upturned points of earlier), but the pointed style is coming back in by 1780, just a little more rounded than before. 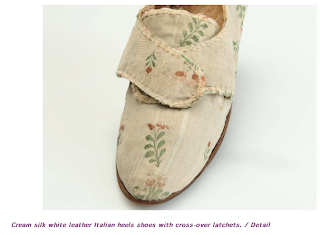 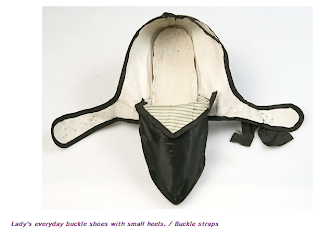 Heel
Heels are slimming, eventually lowering in the 1780s.  This is a case were there is more than just one style, and the thicker heel is still popular well into the 1780s.  Every heel is unique in shape, really.  Note these are all wood heels, not stacked leather. 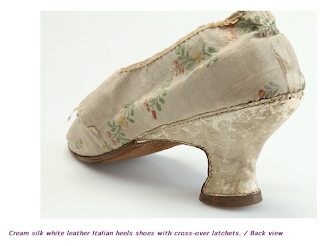 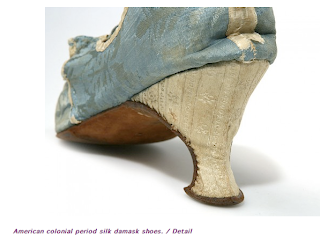 Fabric
I already covered fabric options pretty well in a previous post, so I won't go in depth here (and that whole thing is still apparently a touchy subject).  However, one very fun option during this time is a contrasting heel and straps (or just heel).  Most often this is because the main fabric isn't going to stretch around the heel curves gracefully, so white leather is often used instead (you can see the wrinkles on the shoe heel above).  Colored leathers and fabrics are found as well.  This is done for fashion reasons as well, and the binding often co-ordinates with the heel contrast. 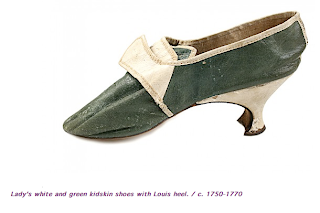 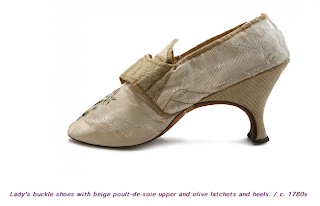 Thank you many times over for this very informative post! It just makes me really sad that just about no one offers anything vaguely similar to these originals... It's going to be a while before I have the funds to commission a proper pair, since I'm pretty sure I'll never have the skill to make them!

This is very informative, and has given me a little inspiration for a pair of white shoes I jut bought! I'm loving the idea of contrasting heels and straps-thanks!

Thanks for making this post! I've been staring at shoes on-line and comparing the dates trying to figure out the differences and similarities. Thanks for laying it all out so succinctly.

Unfortunately, the museums aren't very well versed on antique shoes. With such vague (or even wrong) dating they aren't helping anyone to learn. I wish CW would put more of their shoes up online since they actually have experts in that field to date them!

check out the Bata Shoe Museum (physically located in Toronto Canada). All shoes, all the time!

I am so in love with the Bata Shoe Museum, it's on my top five places to go soon (I was in Toronto a few years ago, but before my history interest existed). I devotedly follow them on facebook and cry a little every time they have a free admittance day.