Anglaise Inside and Out

I recently made two Robe A l'Anglaise (English back) gowns. Here are the inside and out pictures of them both:
The first is made from camlet, a mixture of silk, wool, and linen. The skirt is polonaised by ribbons and thread rings on the inside. Front is closed and secured with straight pins. I added a box-pleat trim to the edges. 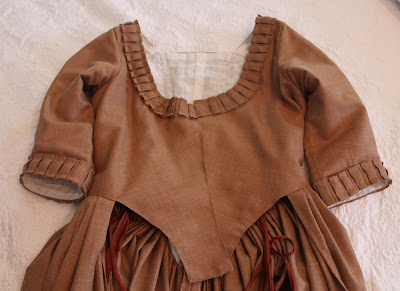 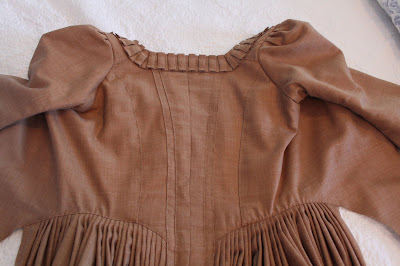 Closer view of the spaced back-stitch used and the pleating. I used 1/4" pleats, but 1/2" are common as well. Notice that the pleats change directions at the pocket slit. You rarely see that on modern reproductions, but it was the most common way to do it historically. There are examples that have them facing one direction as well, but you may find that this way helps with the center back pleats (instead of creating a box pleat on either side of the long back pleats). 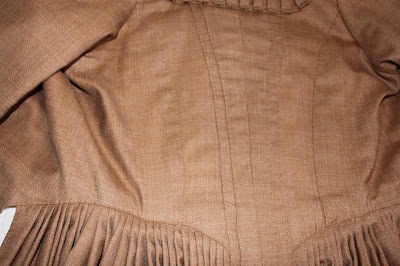 The trimming was folded under at the edges and tacked down in four spots on each pleat. 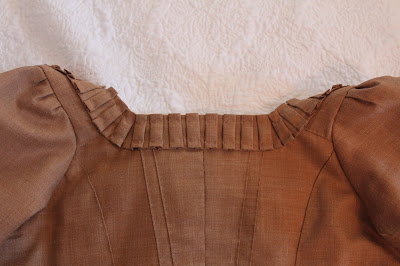 I chose to keep the lining loose at bottom and use it to cover the pleats. You can finish the bodice off entirely and whip the top of the pleated skirt to the bodice as well. That option allows for easier adjustment of size later, but doesn't work as well for a easily fraying fabric. The armscye seams are left raw and open. I've only seen them entirely finished on one women's garment, and we're pretty sure it was made by a male tailor with some odd ideas. Some do have the top half of the sleeve inserted into the bodice, but the lower half then comes out raw. You can whip the edges, but I've found that they tend not to fray too much. Maybe if the garment will be washed? 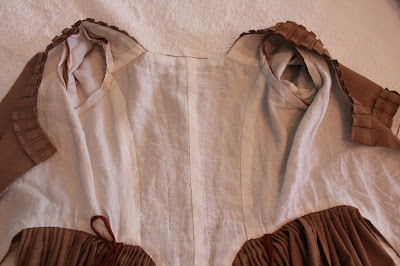 The second gown is linen. It was made off of the same "shape" as the above gown, but has a few changes in style. I adjust the bottom front to be a narrower tab at the bottom and left off any trimming. The sleeves simply have three tucks in front to shape them. 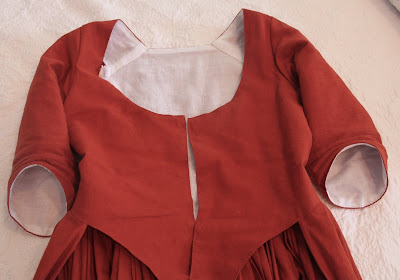 The back pleats are inverted. There are not many examples of this, but they do exist. You can also choose to do more than just two pleats like my examples. I made a high, narrow neck-line, something increasing after 1775. Eventually gowns will have an almost diamond shaped back piece at the end of the century (most quartered-back as well) 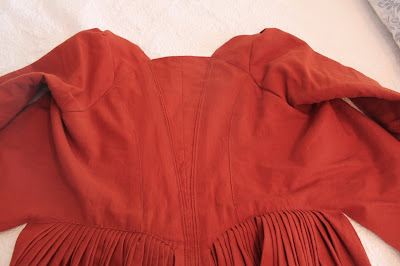 I chose not to put in pocket slits on this skirt since it starts far enough back (and it was one less thing to do on a quick project). Therefore all of the pleats face CB. You can see the box pleats made to accommodate that. There are also a few double pleats at the back to take in some extra fabric. 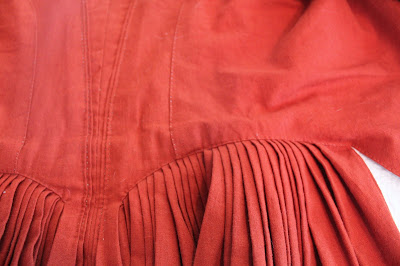 I finished off the top of the back like all other edges, but you can place a cover piece over those raw edges instead. My pleats hit the corner, but many end mid-way on the shoulder seam. The cover would match those points and follow the shoulder seam up, fold over the edges, and be tacked down as a box shape on the inside. 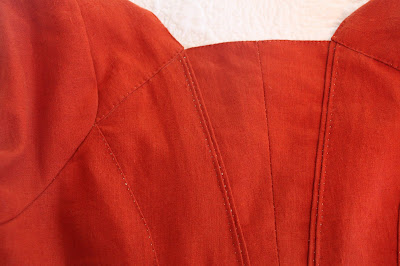 Same construction on the inside as the first gown. 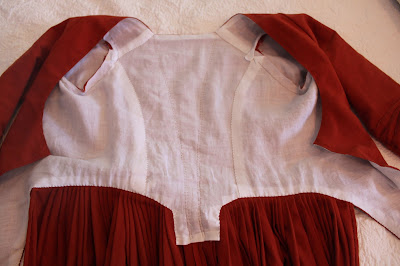 I know that there are some confusing aspects to building this type of gown, so I'll hopefully get instructions put up soon. Check out the back on this gown.
Posted by ColeV at 10:42 AM 14 comments: