So, as the months went by the embroidery began to take shape. Using the wire lace for the swirls saved me a great deal of time and headaches. 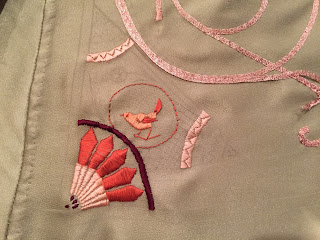 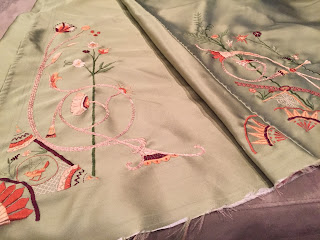 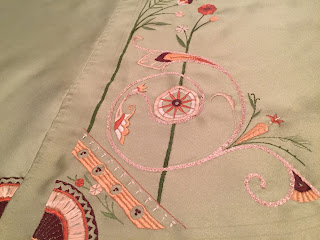 I also began the work of patterning and building up the bodice. I based it on evening gown bodice shapes from the 1890s. I wasn't sure of the design I was going to use just yet, so I went ahead and covered the twill underlayer with some cheap dupioni I had laying around.

Most of the images show a very strong nip in at the waist and rounding around the rib cage, something I tried to do, but not being "corset shaped" in my torso it wasn't as extreme. 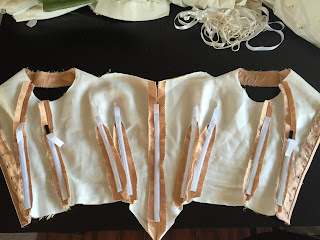 The interior was finished and structured like evening bodices of the time as well. I used cable ties for the boning and silk grosgrain ribbon for their channels. 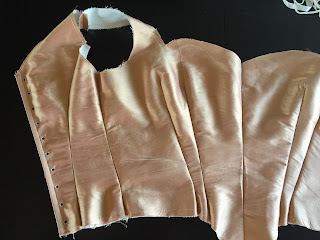 I started drawing in chalk on the bodice to play with final form ideas.

I crammed most of the actual assembly into about one week, the petticoat taking up the most time. 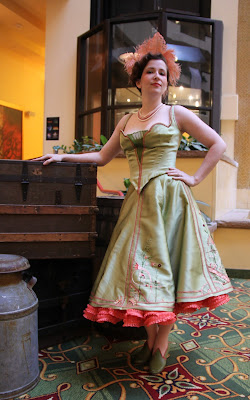 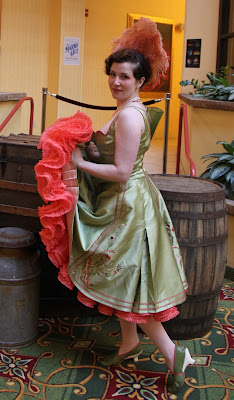 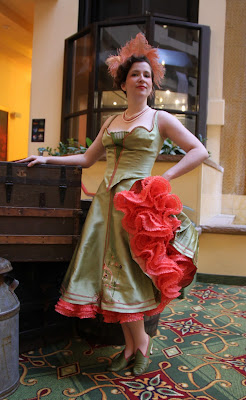 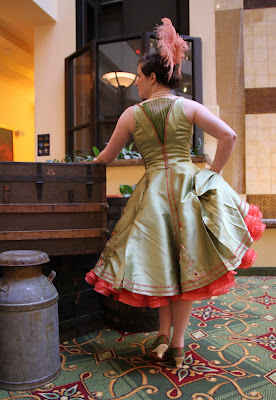 When I started constructing the skirt it became apparent very quickly that I had made the whole thing WAY too big. I started out planning about a 150" hem, but the embroidery was just swallowed by the fabric folding back in on itself. So, looking at some of the original images for ideas, I took the seams in numerous inches and made pleated sections so that the hem would stay large enough for movement, but would be smaller when let down.

The bodice was fairly simple construction, but as you can see in the pictures above I ended up with the front buckling with use. I had left the bones free for the top few inches like you see in originals, but since I wasn't wearing a corset underneath the now three layers of stiff fabric still couldn't hold it up. So, mid-day I took the outfit off and tacked the front five bones all the way up (also tacking the organza pleats down). It fixed the issue, thankfully!

Adding in that the shoes are actually a 1780-style pair I made to wear for work earlier in the year (I just chose my colors wisely). The tights are ballet tights and I did make a super fast pair of fitted satin "knickers" of a sort just in case I was going to flash anyone with the petticoat. 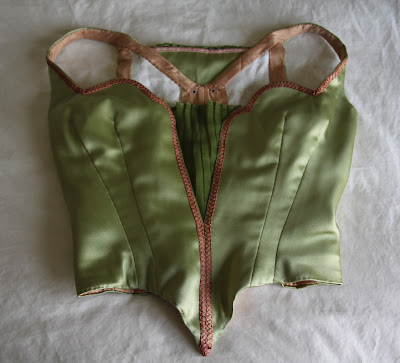 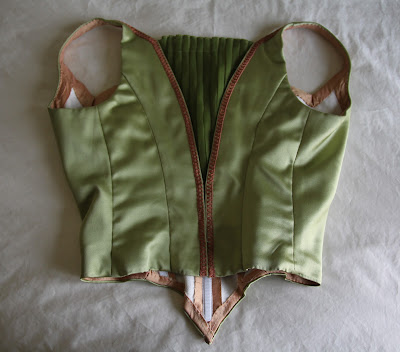 The two back panels were left loose and lined so they could be pulled back to access the lacing. 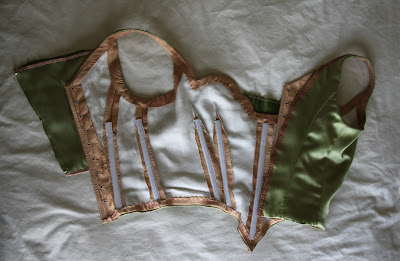 The pleated green organza was tacked to a panel of satin which hooked across the lacings, the two satin back panels then hooked to each other at the bottom half. 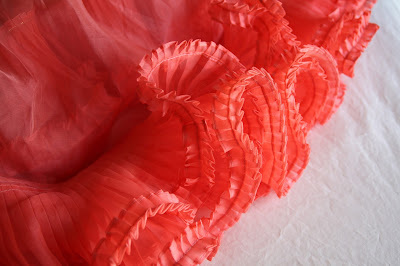 I originally planned 6-8 tiers of about 6" wide ruffles. However, once I made up the first tier it was obvious that the layers would just fold in on themselves and the fullness had to be achieved some other way. I looked at the images again and they all had a much smaller ruffle along the edge which kept the large ruffles from staying flat. So, keeping in mind the yardage I had (about 10 yards pre-pleating), I went with four tiers instead. Overall I hemmed about 150 yards of organza ruffles. The four ruffles are all close to the bottom edge of a roughly 12"x150" unpleated piece that gathers at the top to a small circle. 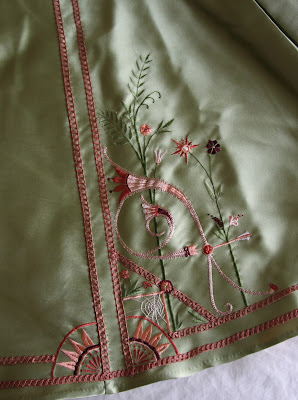 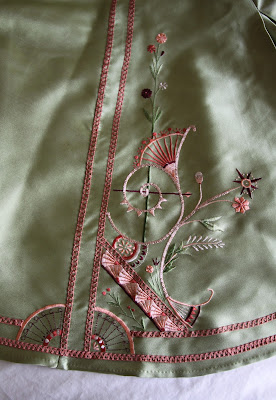 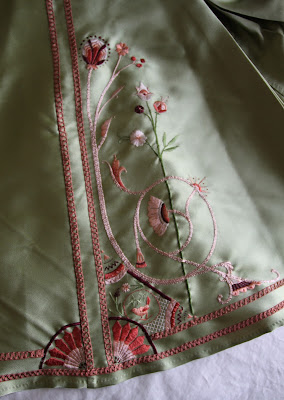 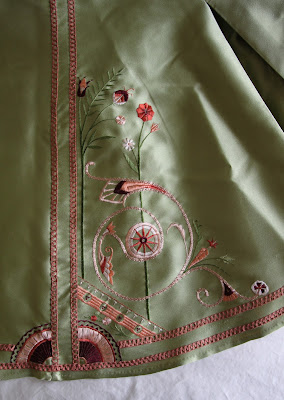 Before I get started, hello again! I know it's been a while, but this year alone I interned in the Margaret Hunter Millinery Shop, worked on George Washington's Marquee Part 2: The Dining Tent, and moved to Omaha, NE. Quite a change in location, which will mean some changes for this blog. But, now that I'm settled the first step is to start posting again!

This years Teslacon storyline took us to Texas to be a part of the Wild West. With the busy schedule I settled on a long-term single outfit that I could pick up off and on for a few months. We had been embroidering a great deal in the shop and I wanted to use that in my design. I settled on a show-girl style costume, the type seen in cabinet cards advertising the Follies Bergere and other similar shows. It may not be the most accurate to put such costumes in the West, but the 20th century does again and again in movies, so I'll claim that part as good enough and try to make the garment itself heavily based in surviving images. While the bodices often do closely resemble 1890s evening gowns, they are their own style and I have yet to find a surviving example. So, images it was. 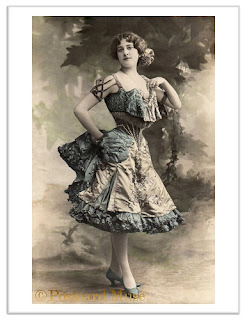 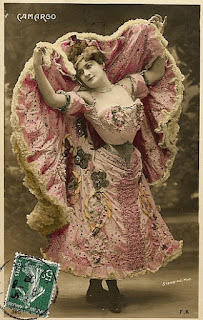 I didn't use a single image to copy, but tried to pull in lots of elements (loads more on Pinterest). I really should have made the whole thing much gaudier to be stage-appropriate, but since I wasn't going to be on stage I just wasn't fond of that idea. 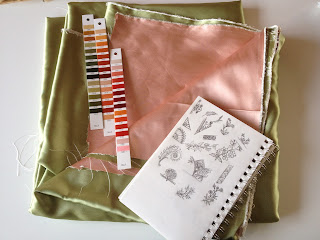 I managed to find some amazing double sided silk satin on Etsy to start. I decided to design the embroidery using Aesthetic Movement styles and set about sketching. The embroidery thread is un-spun Japanese silk. 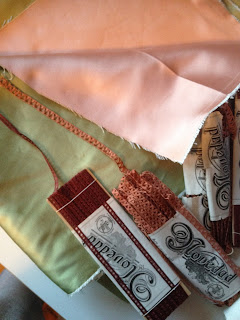 I also managed to find silk passementerie on Ebay, coming from Portugal, to trim the edges with. 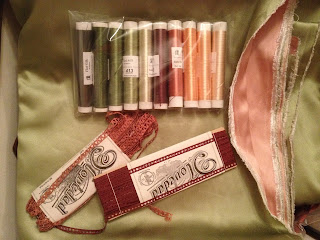 The final colors chosen. I went with the green side as the main color so the pinks would pop better. 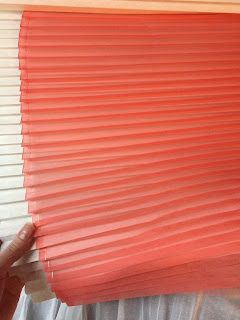 I knew I was going to need an absurd amount of ruffles for the petticoat. Looking at the images, most appeared finely pleated rather than gathered. Organza seemed like it would have the best hand and resembled the images as well, so I ordered about 10 yards and sent it off to International Pleating in NYC to save my sanity (it's really not expensive and there's no minimum!). 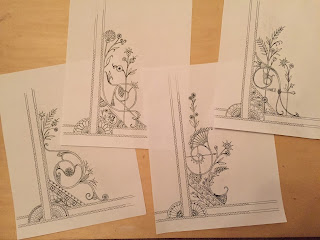 During the Spring I started sketching out the embroidery designs, settling on four different panels. I found inspiration in everything from spoons to wallpaper. 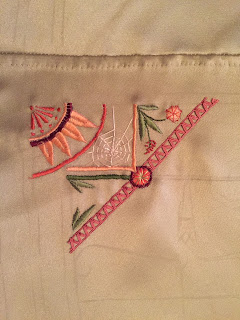 I estimated the size/shape of the 8 panels I would need for the skirt and seamed pairs together to start embroidery. The seams I felled over. I scaled up the embroidery designs and sketched them on with chalk, detailing with pencil. I worked off and on on the embroidery between April and the end of October.