I had sort of planned this outfit a while ago, having all of the fabric in stock, but hadn't planned on making it any time soon.  Then the newly started VA Regency Society contacted me about doing a presentation on Regency fashion.  I needed a good example of a drop-front gown, preferably something I wouldn't freeze to death in like my other gowns.  I pulled out the last bit of camlet mixed cloth I had from B&T and started perusing the books.  I liked the gown in Janet Arnold, but I wanted something closer to 1810.  Fashion in Detail has two very similar gowns that are dated just a little later.  The JA gown was mainly earlier because of the trained hem (something I definitely didn't need or want).  I used the long sleeves of one of the FiD dresses along with it's pleated skirt, taking inspiration from the JA gown for the small tucks on the bodice.
The chemisette is also in both of those books.  The bonnet is based on this one at the Met museum. 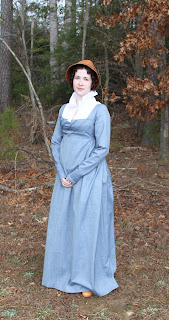 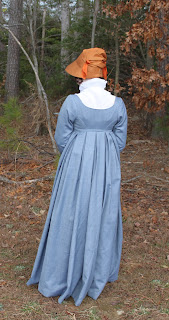 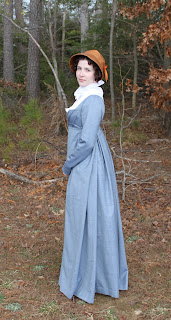 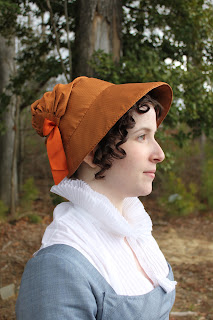 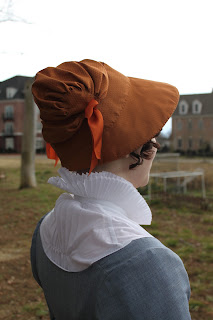 I'm hoping to put some gimp trim on the bonnet like the original, but I'd rather find the right stuff than rush it.  I also need to put some extra tacks on the chemisette pleats in back since they are very prone to puffing (the pattern said cut it on a bias....).  It doesn't help that I took off the gown at the talk and didn't properly adjust the chemisette when putting it back on. 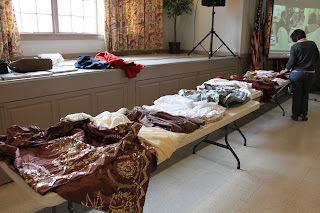 Between the two of us, Gwendolyn and I managed quite a timeline of garments!  I still need to make some early 19th century men's wear I can keep around (it's all gone off to clients so far).
Posted by ColeV at 6:14 PM 13 comments: