I apologize for this being fairly short, I'm still exhausted!
I just returned from a trip to Disney World and a short cruise on the Disney Dream.  Usually, neither of these warrants a costume post, however, seeing as I was in DW when they started their Halloween party and I managed to squeeze making two outfits in for the cruise, I do have a few photos.

The pirate costume I wore in DW is not new, but getting to wear it inside a park is!  I don't know if I've posted it here before, though.  The jacket is loosely based on a German woodcut from around 1750.  I wasn't looking for total accuracy, just something lighter and easier to pack than a gown!  The main fabric is worsted wool, the facings and cuffs are linen.  The stomacher is boned, the buttons are metal with ships wheels, and the tie is a lucet cord. 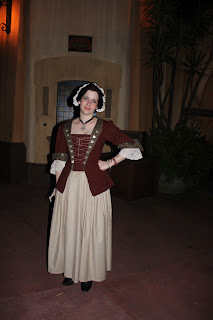 Barbossa came over to greet me during the parade, and, of course, I rode Pirates of the Caribbean then waited to take a picture with Captain Jack Sparrow. 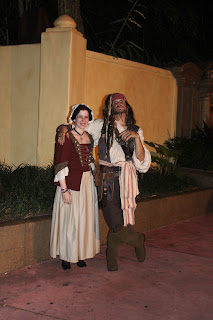 On the day we boarded the ship, I wore a late 1930s style gown which I had an original pattern for.  The fabric is linen dimity (from B&T).  There's a grosgrain ribbon bow and I happened to have a number of vintage buttons that were just perfect in my Grandmother's stash. 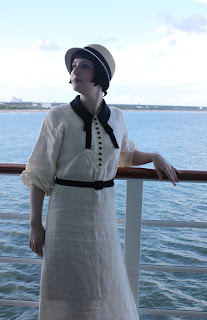 I'm not sure it was the best choice, considering how many times I was stopped to ask if I was a particular "character" on the ship (or other questions about the cruise itself).  At least they had the time period right, since the ship is Art Deco.

The last outfit was for the final night.  We had a reservation to eat in Remy's, which is a fancy Art Nouveau restaurant (there are five main courses, not counting things like amuse bouche and petit fours).  I'm also planning on making a 1912 gown in the near future.  So, I decided to quickly throw one together based on the pattern in Janet Arnold to wear on the cruise and to give me experience for the nicer one.  I used a vintage sari for the over pieces, silk chiffon between, silk charmeuse, and silk velvet. Unfortunately I had to dye the chiffon and charmeuse because they arrived in hideously bright shades of lime green (so not what the pictures looked like online). 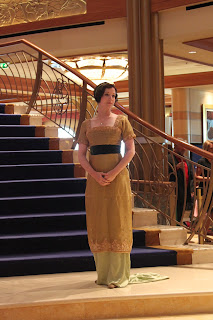