As I'm sure you've seen, I recently finished my first pair of ladies 18th century shoes.  This was done, in part, through a workshop offered by Brett Walker.  He's currently an apprentice shoemaker at Colonial Williamsburg and has been making shoes for a number of years now.  While my workshop was split over a long period of time, he's planning on doing a ladies shoe workshop in upstate New York later this summer.  I had such a wonderful experience with it, that I very excitedly offered to get the word out about it.  I've posted his description of it below.  If you're interested, have questions about the price or anything else (including accommodations) feel free to contact him at boot_smith (at) hotmail.com .  If you would like a phone number or mailing address to contact him, I can give that out, I just think it's better not to post it publicly! 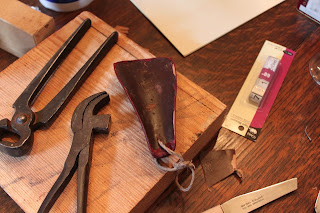 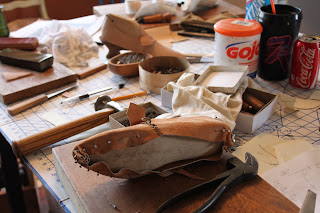 The site for the shoemaking workshop is being narrowed down, now, to one of two places: 1) Eastfield Village (Don Carpentier's place in East Nassau, NY); or 2) the new Mars Education Center at Fort Ticonderoga.  There will be an eight-hour stitching workshop on the Saturday prior to the full class (20 August) that will be open to the publick.
This part is a prerequisite, of course, to the full shoemaking workshop, and the fee is included in the total class fees for students of the entire class.  However, this day will also be open to the general public as well for a stand-alone $60-per-person fee.  We will cover measuring and making up of threads, attaching bristles, shoemaker's stitch, round-closing, split-and-lift stitches, "subcutaneous" whip-stitches, stabbing stitches, & perhaps some miscellaney like how to make black wax, &c.

Sunday the 21st will be a short recess, and then the shoemaking class will begin in earnest at 8:00 a.m. on Monday morning, 22 August.  The first hour-and-an-half or two hours will be a brief seminar on men's and women's shoe fashions, ca. 1700-1800, in which we'll be attempting to "raise the bar" of the attendee's awareness of stylistic and construction details in the various decades of the 18th-Century.  This will most likely be open to the public for a $35 stand-alone fee, but that has not been confirmed.

At ten o'clock, we will take a brief break, after which those folks who are taking the full six-day class will dive right in to making instruction, wrapping up by five o'clock on Saturday, 27 August.  When the workshop is completed, the students should have at least one shoe finished and perhaps a second one started. 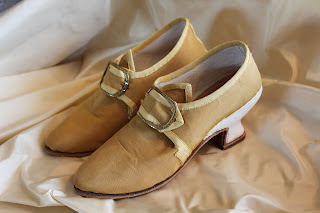 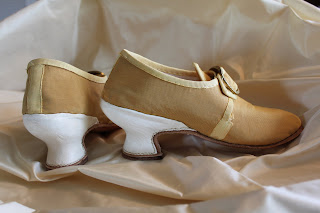 Sounds awesome! I LOVE how your shoes turned out! Do you know how much the full workshop will cost?

I do not have the specifics on that, but if you email Master Walker, he will gladly let you know. When I did it, it added up to between the cost of one & two pairs of custom shoes.

Thank you for sharing this information! I can't go at this time, but I've emailed Master Walker and asked to be informed of future workshops.

I love reading your blog!

So pretty! Now I've made quite a lot of medieval and viking age shoes, which are a whole lot different from 18th century shoes, but I still can't help wondering if the basics aren't the same? Anyhow, I'd love to try making 18th c shoes as well, I just have to find someone who can teach me! (I live in Sweden so the US is a bit far away...) Do you know of any good online tutorials? Now since I've just started my first 18th century outfit I'm not in any hurry to get shoes done...

p.s. I love your blog, and I'll definitely start following it. =)

Hi Fanny,
I'm not too knowledgeable on earlier shoes, but I do know the type of construction I used wasn't invented until fairly late (after heels came in). There are other methods of the 18th c. which are probably more similar (using welts, etc). Unfortunately, I don't know of any tutorials at all. There are a couple of books that touch on the subject, but none that would contain enough info to actually make a pair. It's really a hands-on thing. The Aristocat recently posted on LJ about making her pair, I've got a fair number of things up, Eliza West has great images of her process, and there are a few other cordwaining pictures floating about. Look up Bespoke Shoes Unlaced on blogger as well, it's for modern shoes, but they have very informational posts on techniques.