At Costume College last year Lauren of Wearing History had a great presentation on how to start your own vintage (30s, 40s, or 50s) wardrobe. Now, I already have a lot of pieces, though some are a bit small now and the rest feel a bit mis-matched. I figured I should take a fresh start at it! Her recommendations of what basics you need reminded me of how I haphazardly started in the first place back in college- making repro suits and blouses from our costume shops vintage pattern supply. I was planning to start this series with that again, but I've only had the time to make one full suit and I didn't document the steps on that one as well. So, instead we're going to work from skin out, even if I don't sew it all in that order. I'm planning to make a very basic set for all three decades and probably spend a lot more time fleshing out the 1950s one with time, since that's what I wear every day.

To start I've made two different brassieres. I wear pants most days, so I just made a couple of quick pairs of fitted panties to match and try out. I'll eventually make more and at least one pair of shorts and a garter belt. First everything needs to be worn a few times to make sure it fits and is comfortable all day!

The hardest part for me was figuring out what fabric and supplies I needed. I ended up starting with some silk charmeuse, though poly charmeuse would work well. I then ordered a couple colors of elastics, straps, notions, stabilized tricot, and regular stretch tricot (for panties) from Bravo Bella. I ended up needing way less elastic than I thought (originally planning to finish the bra edges with it) and wishing I had bought more hooks and notions so I could make more bras right away! The beige I ordered was just a little pinker than my charmeuse, so I dyed the fabric a bit. I also had a little bit of stretch net I dyed for it, though I can't recall where that came from.

The first bra I used the Foundations Revealed Soft Bra series parts 1 & 2 to draft out a pattern. To be honest, I stopped wearing regular bras a few years ago and have stuck with bralettes because I've had such a hard time finding bras that fit. I've tried a few brands, but it just doesn't work. My rib cage is very wide and flat, so anything in the right band size places the cups way to close together for me. This drafting worked almost perfectly and I only had to make some minor adjustments in the muslin phase! 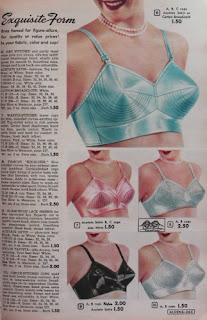 I really liked the stitching on the second row, left so I used that for inspiration combined with a few other images. Sourced from Vintage Dancer's article on 1950s underwear. 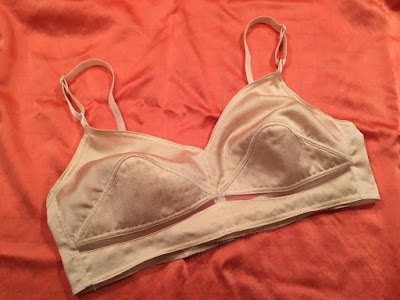 The only alteration I made to the draft was to add a small strip of the stable tricot between the band and cups. I have a (too small) repro bra with this feature and love it for warmer weather. 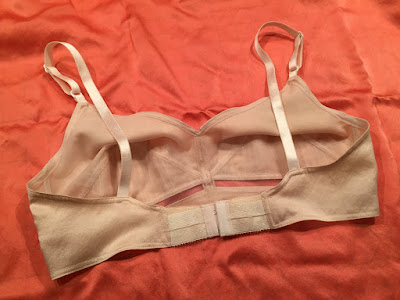 The back has a small bit of elastic on the band which makes all the difference in fit. Original bras of this time would have had ribbon for straps instead of elastic, but this is easier to find! All of the pieces of charmeuse are flat-lined with the stable tricot and the bottom of the cup was topstitched through one layer and lined with another. 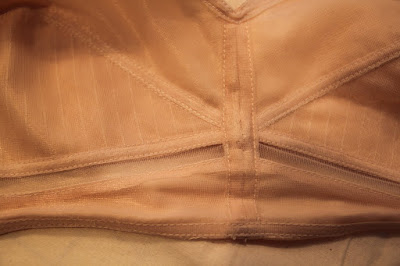 The seams and edges I ended up finishing with the same stable tricot cut into strips and made into tape (just not on the bias). I discovered that this type of tricot only irons well one way after a great deal of confusion! Just flip it to the other side and it creases nicely. This also the one part of this bra I won't do again- the tape across the mid seam of the cup is a little rough compared to the second style I made. 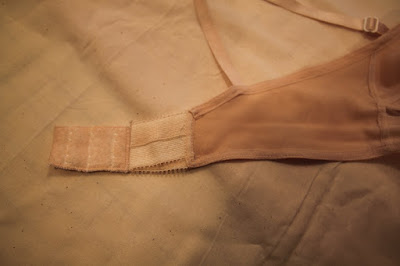 The back design with the folded elastic seems fairly standard for the time. You can see a good example on the Met Museum site (I think this brassiere will be on the future list). 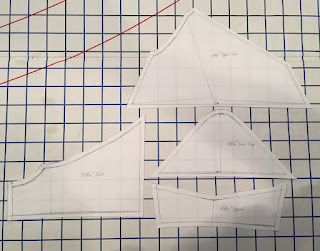 For the second try I used my other color scheme and altered the pattern just a little bit. I wanted to do a curved cradle and narrowed the under-cup triangle. It also allowed me to alter the "point" of the cup a bit, which was a little roomy in the last bra (I just need to make small pads like you see for bullet bras later). 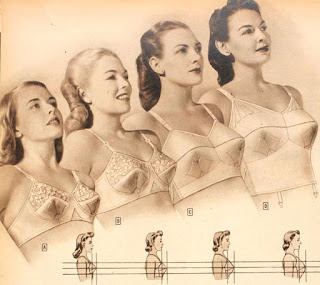 Though I didn't put the extra elastic V in front, I used the shape of the left two for inspiration. This image sourced from Vintage Dancer's page on 1940s underwear. 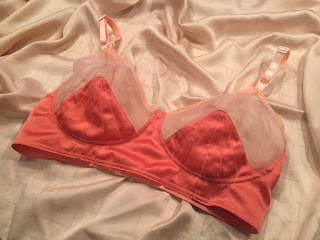 It's the same pattern base, I swear! I had fun using the stable tricot for the upper cups as well as the lining this time. 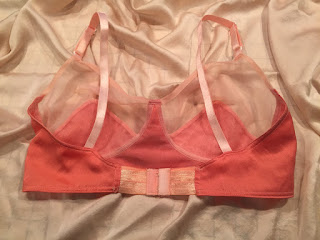 The same design for the back. 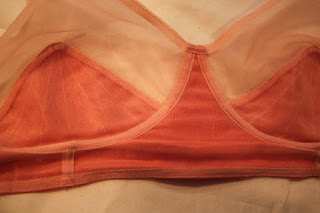 I decided to use the extra tricot lining for the bottom cup as the method for finishing off the cup seam. I've found it much more comfortable so far and it has a nice finish on the exterior as well. There are no underwires here, they really weren't common until much later though they exist in some 1950s bras. The middle does sit out a bit from my chest for that reason, but still fits very well. 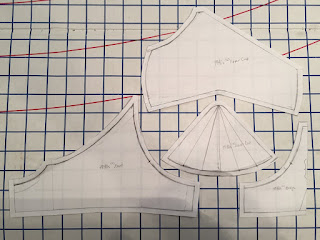 I think this is going to be the next style I attempt, though the Met brassiere, a bullet bra, and a Kestos design are on my list as well!
Posted by ColeV at 12:55 PM

These are beautiful! You are inspiring. You have given me the push to try my own hand at bra making.

Nicole, These are gorgeous and such a point of inspiration. Thank you for sharing on your blog. I'm looking forward to reading any other posts on building a vintage wardrobe or on lingerie-making. Cheers!

These are fantastic. I especially love the detail and use of fabrics in the second one. I have been tempted for a while now by the idea of making my own bras but haven't yet found the time or the courage to start experimenting. This post is definitely an inspiration to get started! Thankyou :)

Oh my goodness these are gorgeous! Beautiful work!