The last few weeks have been a whirlwind of projects with due-dates, not all for me. That's settled down finally and I'm getting some work done on a huge project I'll be posting about sometime in the next month or so. In the mean time, I've made quite a few things this year I haven't posted about yet (and even a few last year... oops). First up is my first Sack gown. You heard me, I've never made the infamous Robe á la Française before. This was one of the best challenges I've had in a while. I've made similar garments such as a Brunswick, but the fitting still required a lot of change. All of which I fitted to myself, and had no reason to, so that was stupid and difficult. Also, with a deadline for the Millinery conference earlier this year.

Moving on, you may find this gown a little familiar. It's actually recycled from one of the first 18th century style gowns I've ever made. I had almost four yards left over after construction. That got used for the two back panels and bodice, the skirts of the previous gown for the front skirts. The petticoat required some piecing in back to get the right height. Fortunately I had used a large hem, so I managed to get some extra length out of that. I still have the sad, machine stitched bodice of the old gown in a basket. Just can't get rid of it yet. That's also pretty much all that's left of the fabric after trimming!

I used a combination of my old gown shapes along with the pattern for the 1770s gown in Patterns of Fashion. This type of striped silk seemed to be very popular for sack gowns in the 1770s, even more so in yellow. I ended up using this gown at the Met museum as trim inspiration. Underneath for support I have a pair of side hoops. Yet another thing I need to remake- I wrote an article about that topic for YWU and need to do a correct pair now! I do have a larger hoop, but I needed to fit in the car. 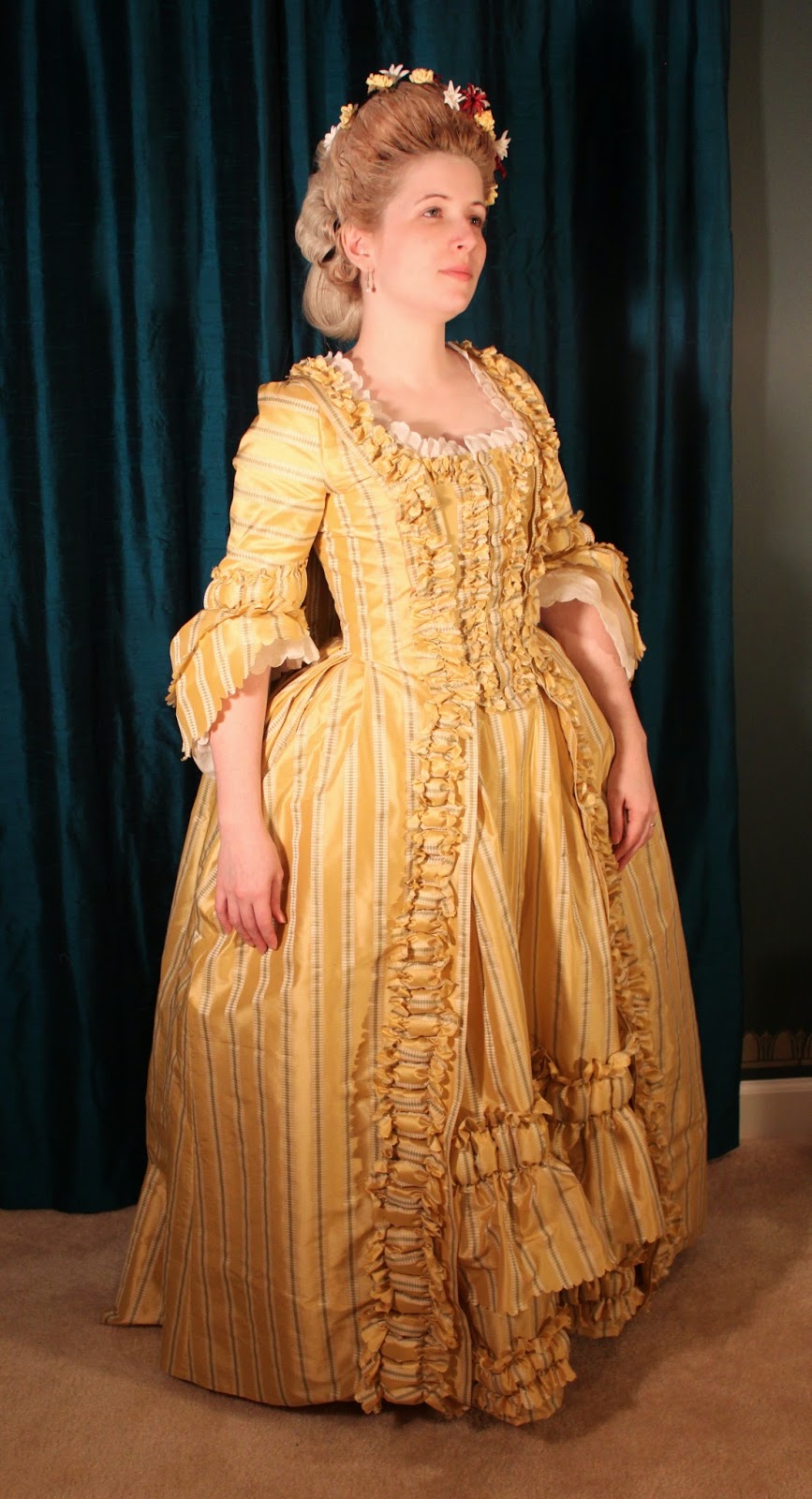 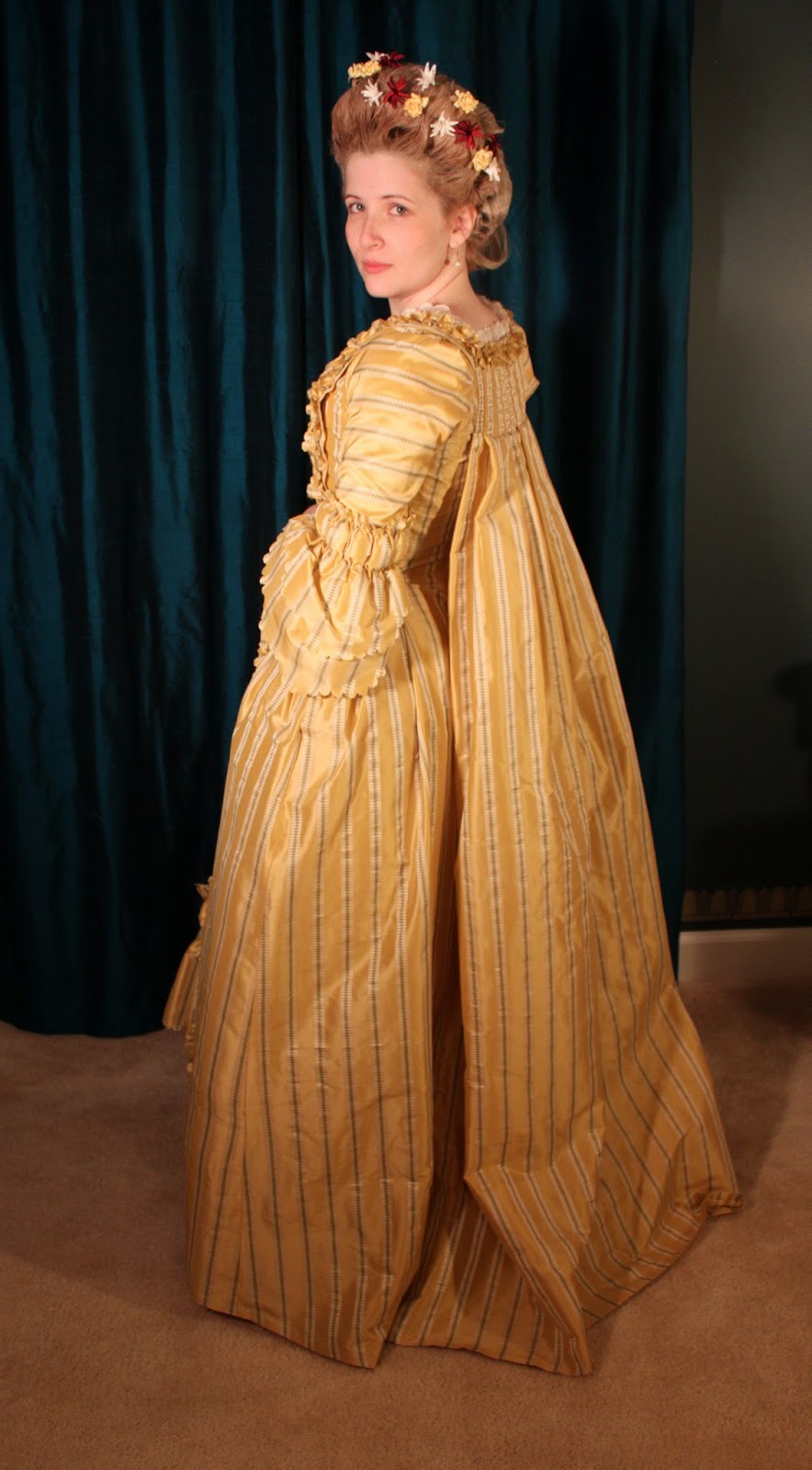 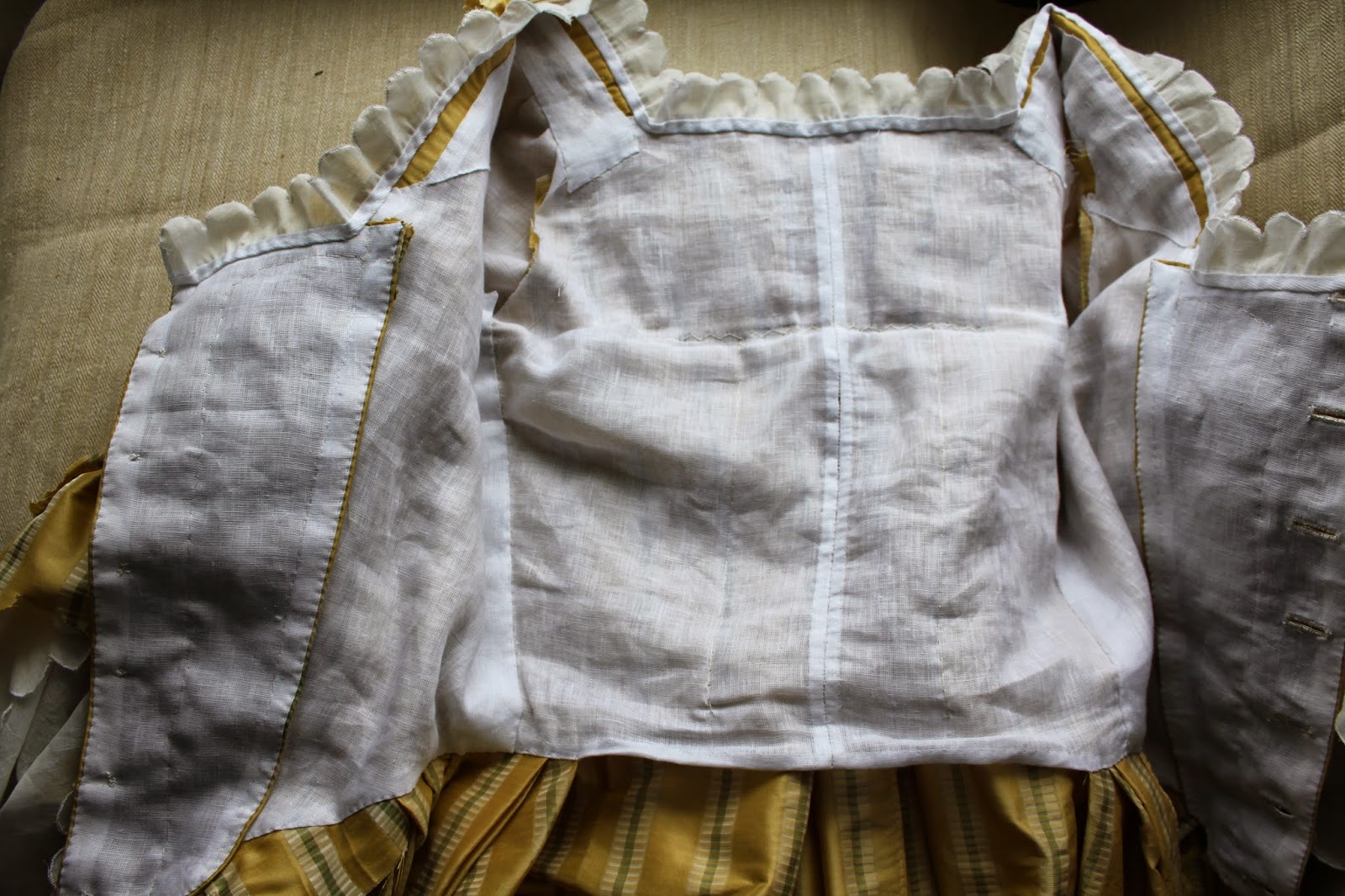 I originally planned on doing ties or lacing across, but didn't like how that worked without the cut out in the lining. So, I stitched the seam up and can't gain anymore weight. 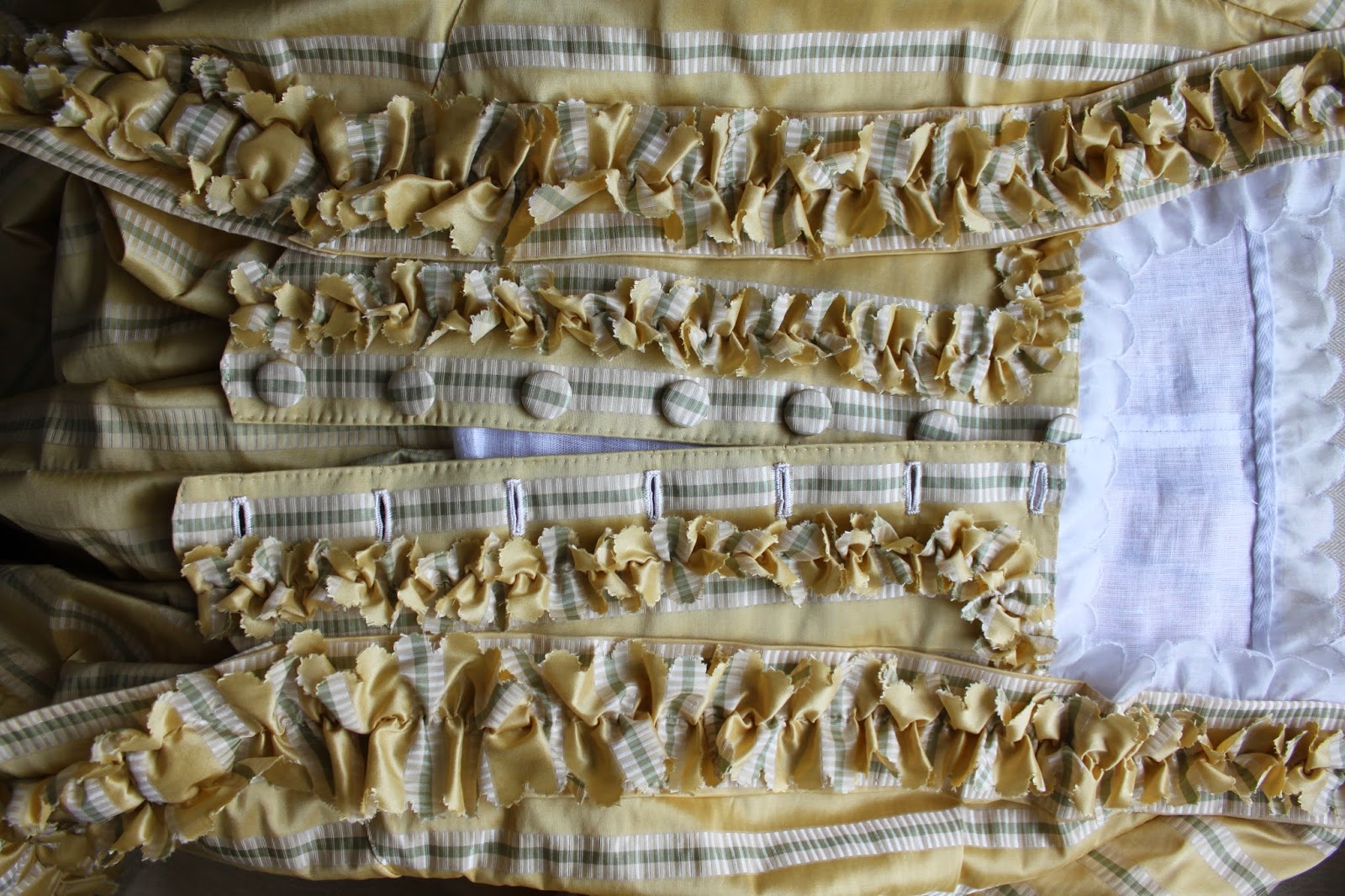 The stomacher is the only part that has "interfacing", in this case buckram. Buttonholes really require some sort of reinforcement. 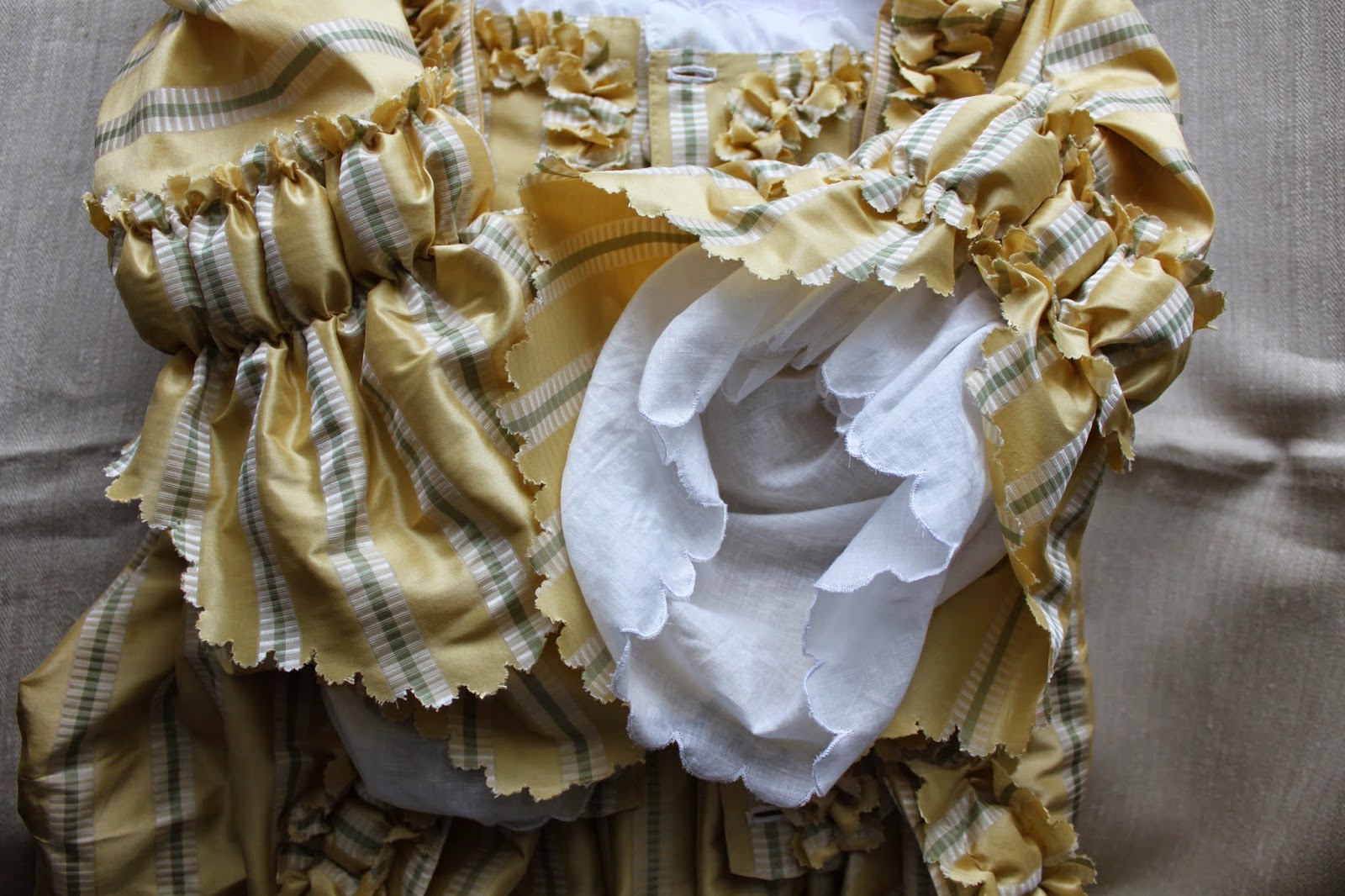 I spent literally days looking for lace for sleeve and neck ruffles. I just couldn't find what I wanted. So, I grabbed some cotton from the stash and did a scalloped buttonhole stitch in silk around the edges. I'd like to make nicer ones at some point, but I don't think I'll be crazy enough to embroider them myself after that. 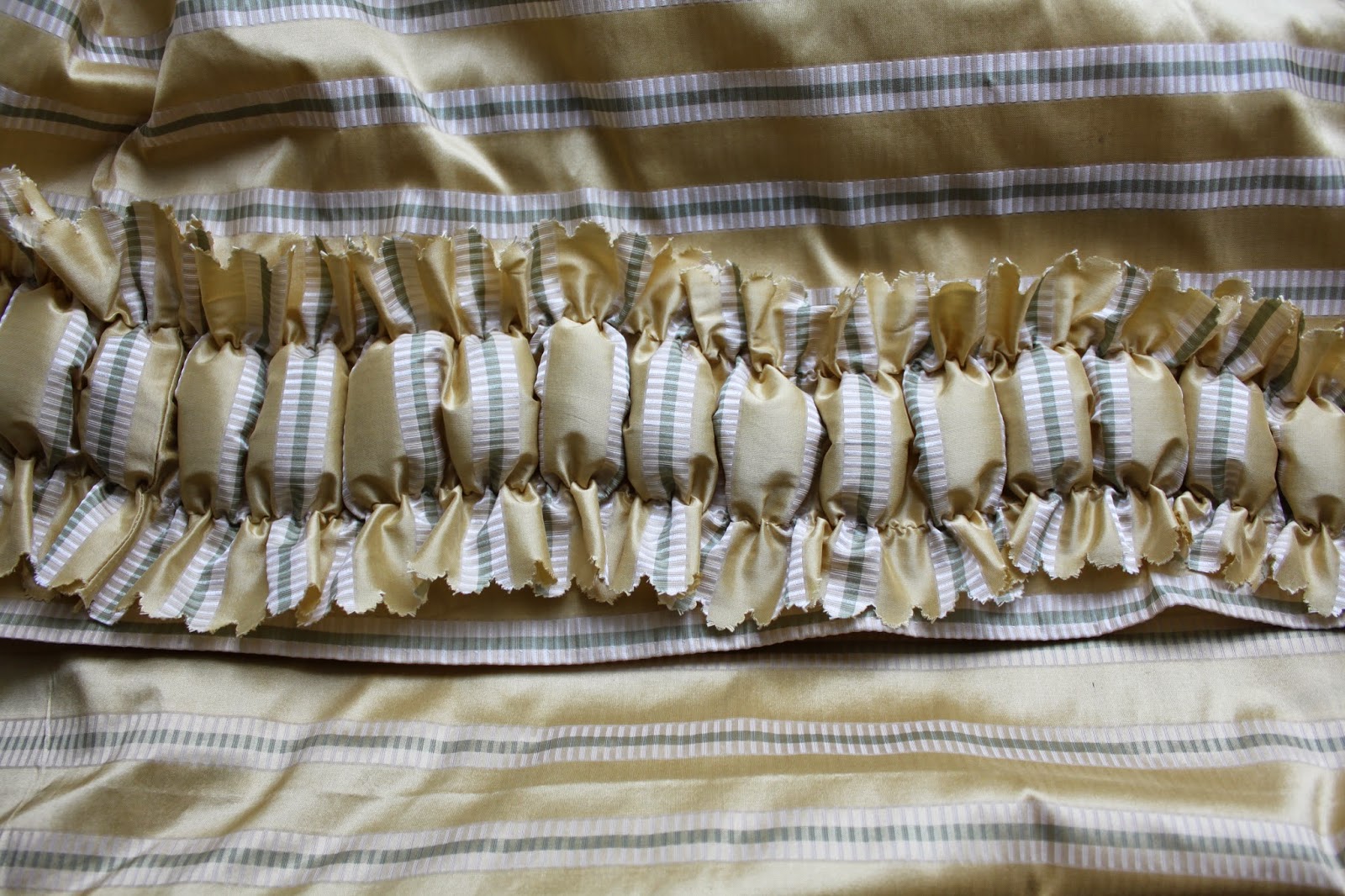 All of the edges of the trim were pinked. The gathering was done by folding along the line and whipping over it from the inside. It gives a nice fullness. For the puffs I actually inserted stuffing!

You can't have a grand gown without the hair. I seriously wish I had Kendra's book, though. I had about shoulder length hair at this point in time (mostly chopped off now). So, I needed some extra pieces. 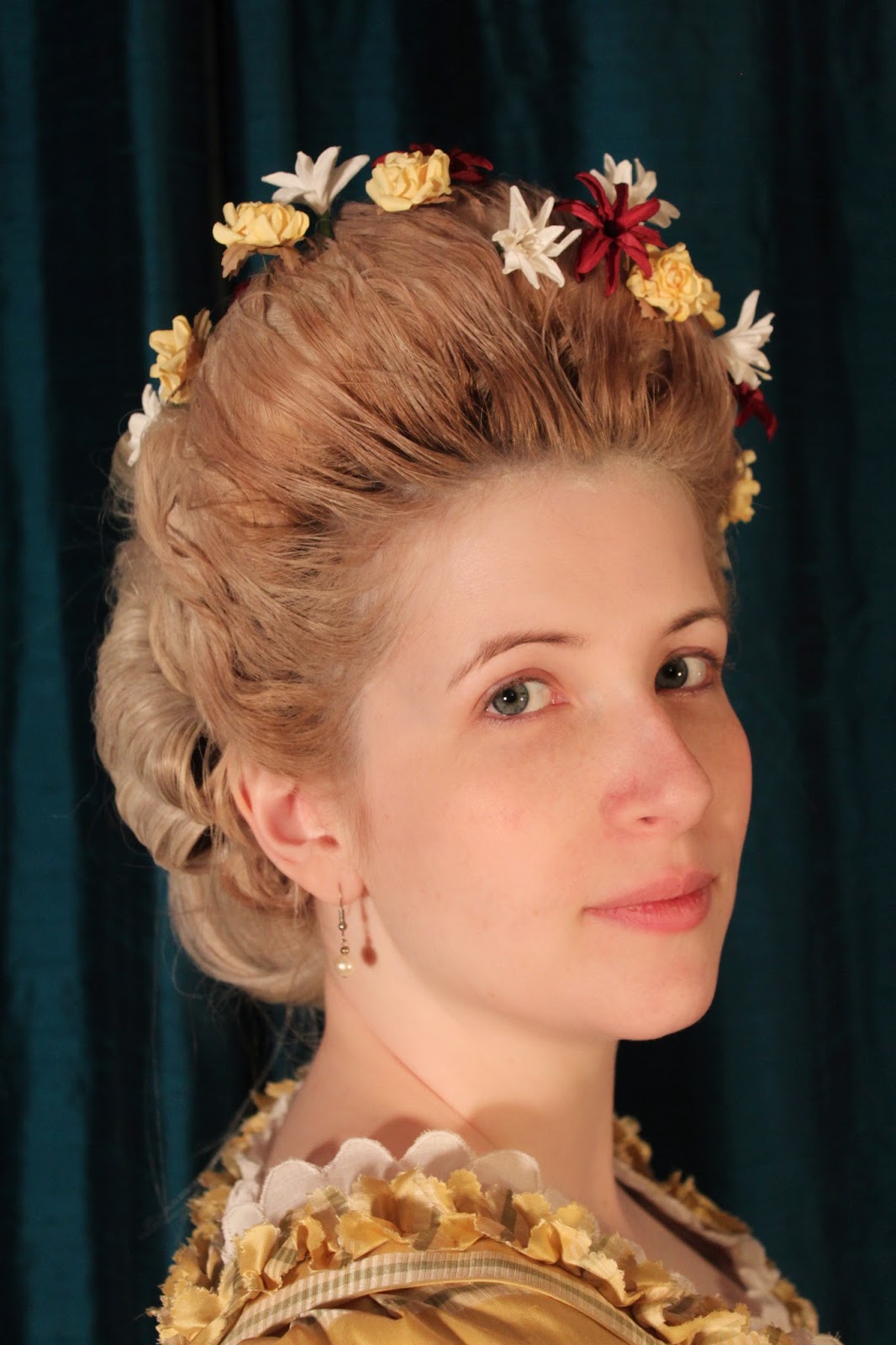 The front has a rat- just a cutoff leg from pantyhose similar to my hair color filled with stuffing. 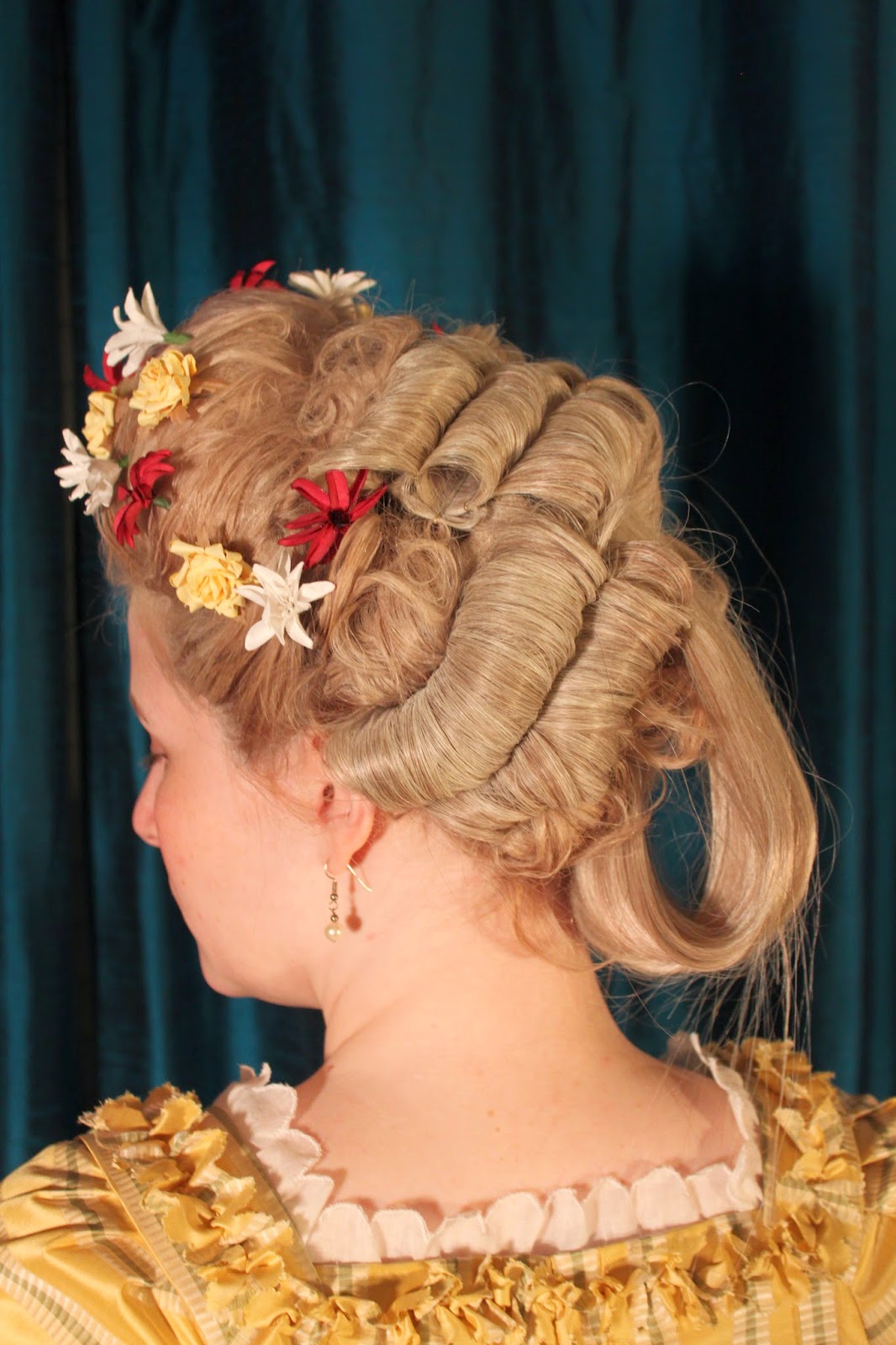 The back literally has three pieces made from one very large weft. I had to dye the hair slightly to get it more "golden" since when I bought it I was platinum. You can see how I curled a little of my own hair to finish off the top edge. 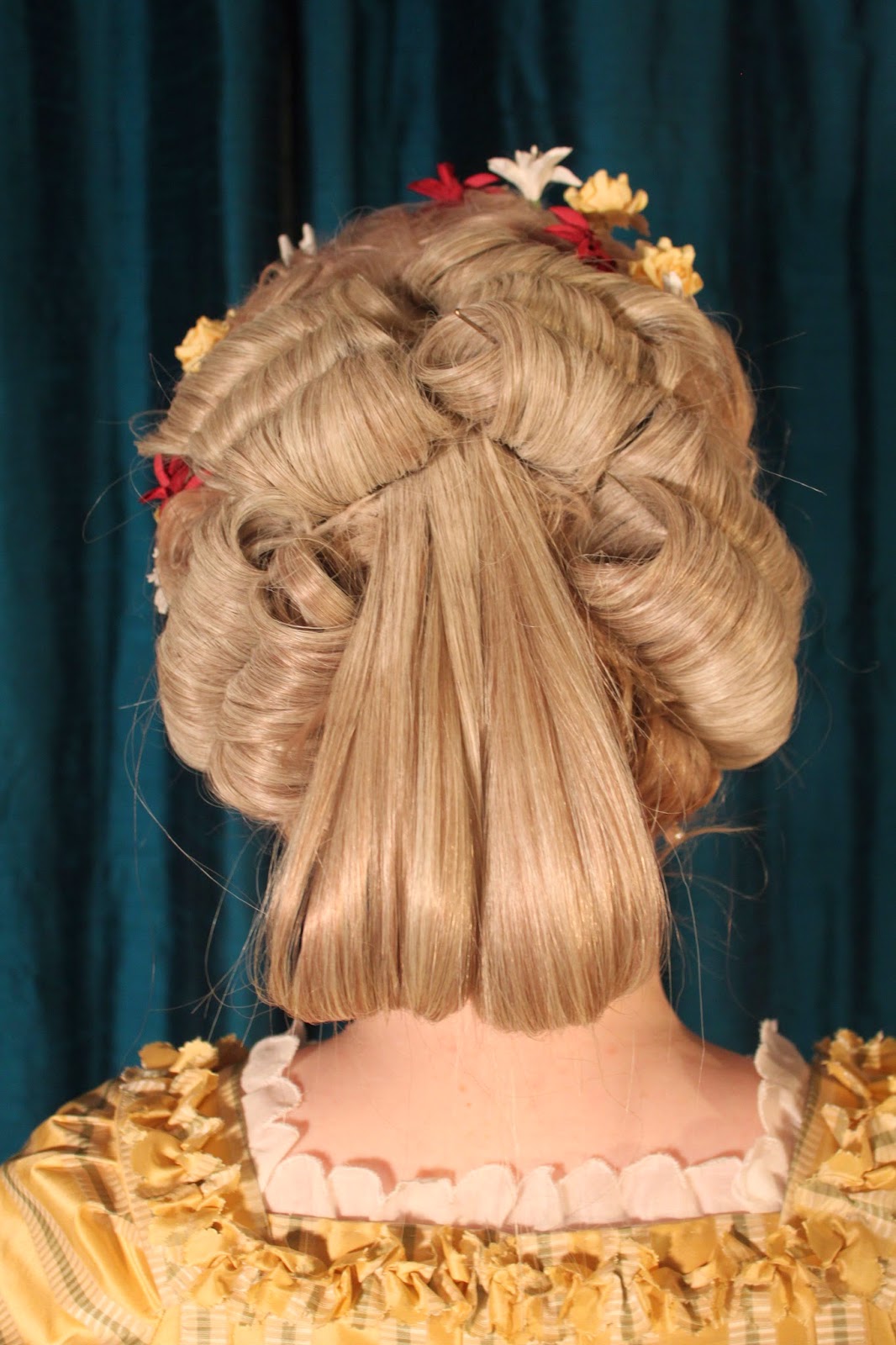 I had no clue what to do with the back and even less time, so the quick loop was the best option! I finished it off with hair powder from Little Bits (grey) and some paper flowers.
Posted by ColeV at 5:12 PM

What a beautiful dress! And I admire your hairdo too, the paper flowers are a nice detail. It suits you very much. I cannot believe the hairdo is made from your hair (+ extra pieces), it is so elaborate.

The trim details are especially nicely done and perfectly proportioned to the gown. And the fabric is just gorgeous. It's quite lovely - and was even prettier in person! :-)

Wow I am blown away, it just looks like you could have stepped right out of the KCI exhibition book....I am feeling a desperate need to get back into projects this afternoon after seeing that! Gorgeous work as always.

I thought you looked stunning when I saw you. It looks even better in person. You are so talented. <3

Where did you get your pinking iron?

Juliana- the pinking iron was from a small quantity Wm Booth Draper had reproduced a few years ago. I don't know who their source was, but I'd recommend contacting them.