Of course, I can't be caught wearing the same outfit twice, so the second day brought a completely different ensemble.  This one has its roots in numerous gowns and jackets of the 1890s.  The first pictures were taken in front of an antique desk that was steampunked into a cigar rolling factory- a combination of Dr. Grymm Laboratories and Foundry Cigars.  And yes, even the cigars have cogs on them! 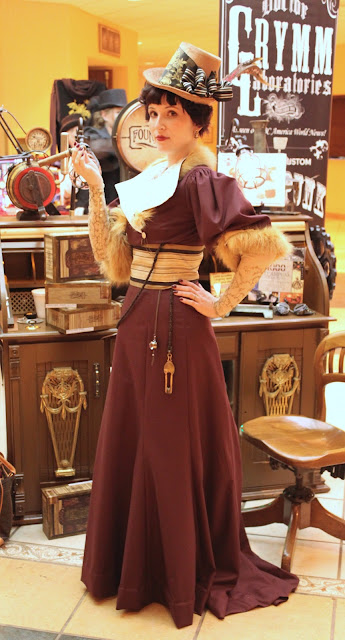 The main body of the dress (which is two separate pieces) is claret worsted wool.  The sleeves are antique lace which had long since lost their bodice, the fur trim is actually dyed raccoon, the lapels are a woven silk mix, while the waist is based around an antique ribbon.  The skirt diagram came from The Cut of Women's Clothes while the top was patterned, inspired by this jackets lapels. 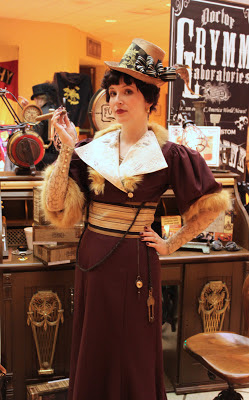 The sleeves were inspired by this image of Japanese lady in western dress.  The two items hanging from the waist are a small watch and a skirt lifter.  I found the lifter on Ebay, still with it's original cord.  It's not only beautiful, but saved my hem numerous times (and as you'll see with my ball gown, it was absolutely necessary). 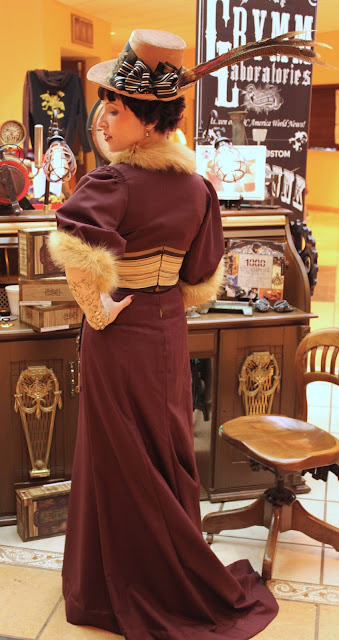 The hat is probably my favorite part of the whole ensemble.  The shape was based on this rather infamous hat, covered in silk velvet.  The ribbons are all antiques, mostly sections too small to do much else.  Wrapped around the hat it's a checkboard with floral, while the bow is black and white stripes.  I worked in a hidden section of ribbon to hold the giant pheasant feathers, making them easily removable (necessary when sitting in talks and panels). 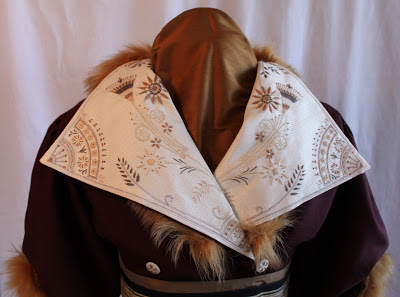 Though you can't see it in the pictures, the lapels are embroidered (mostly by hand).  I used a silver Aesthetic Movement picture frame as the basis for the design.  Some of the threads have metallic wrapped in, but all are silk.  The buttons are embroidered as well. 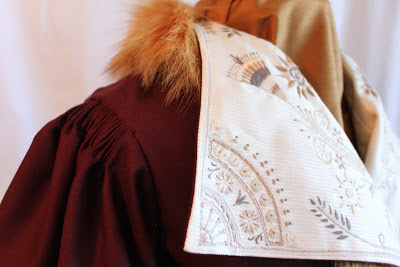 The sleeves are cartridge pleated so they aren't puffy on top, but lined with silk taffeta to keep them stiff. 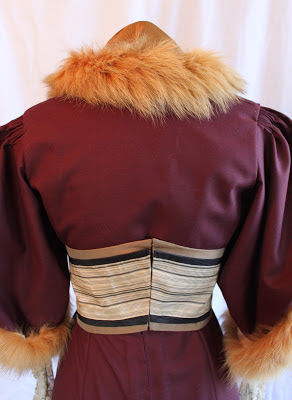 The waist ribbon is backed by black moire taffeta and copper taffeta.  It wasn't very strong anymore, though it looks to have originally been a sash.  The center back peaks up slightly.

The embroidery on your lapels is beyond awesome! I'm a huge fan of aesthetic art so I love that little touch. So perfect!

Love it. Thinking about doing a blog about steampunk and period costume
My inspirations and stuff I've altered to make into vintage. Could I paste some of your stuff and comment about what it inspired me to create. Tori x

Certainly Victoria! Make sure to let us know when it's up!