In the summer of 1781 the British troops were advancing towards Williamsburg.  Just across the river from Jamestown is a plantation known as Smiths Fort (built in the early 17th century with some evidence still visible).  It's owner, Mr. Faulcon, was a patriot who helped the troops by allowing them to stay on his land after the British burned much of Cobhams Wharf.  I went out to show the shoemaking trade. 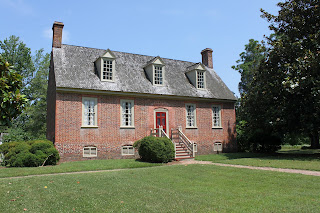 It's a beautiful museum inside- one of Virginias hidden treasures. 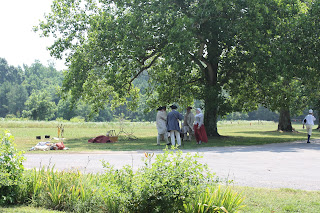 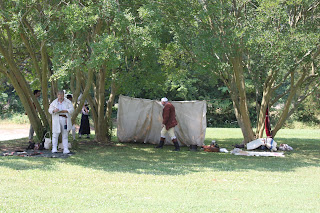 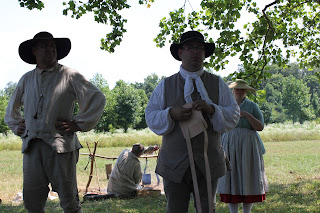 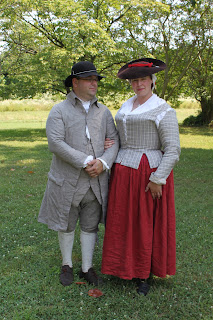 Mr. Balances coat I made up this week- based on the unlined extant at CWF.  The Virginia cloth used was very easy to work with, and very light!  The front has facings to cover the buckram layers and the back has a small section up at the shoulders to finish the collar, but the rest is unlined. 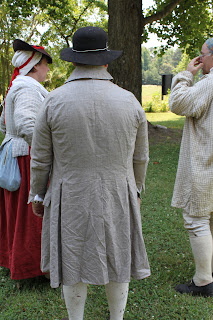 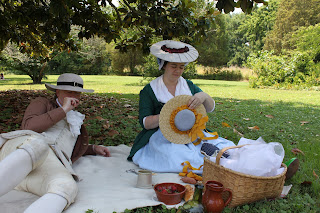 The Faulcons out for a light picnic (Bryan Kennedy and Taylor Shelby). 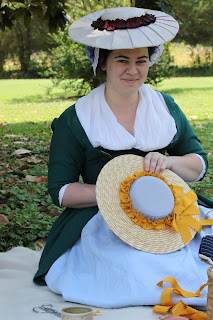 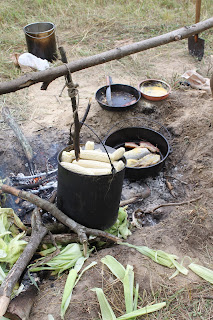 Dinner on Sunday was fresh corn and fish breaded with cornmeal and grits.  The day before we had a ham and vegetable stew.  Of course, there was plenty of bread, cheese, fruit, and spirits to go around as well! 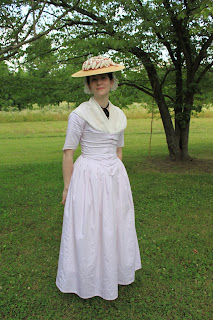 I finished my new summer round gown just in time.  It's from B&Ts figured muslin (white with a tiny red stripe).  I made it unlined, based on a 1785 muslin gown at the Met Museum. 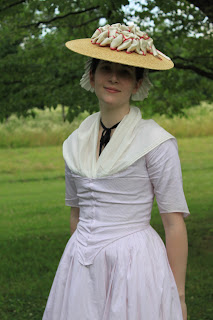 The kerchief is cotton lawn, on which I still need to put a few more tucks at the edges.  The hat is based on images like this and this. 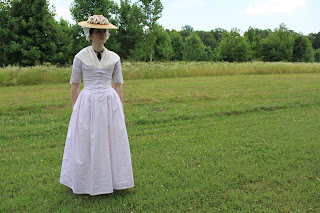 Thank you to Kelsey Freeman for taking my picture! 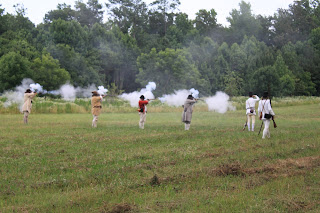 There was, of course, shooting.  Although no one thought to bring any ammunition, so those turkeys we scared up in back of the house got away. 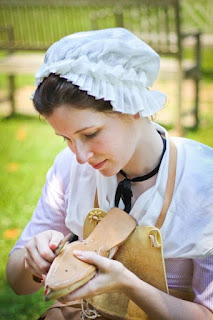 I just wanted to add this photo Kelsey Freeman shot of me working on Saturday- it's just too beautiful!

You look so beautiful in that last picture! And in all the other pictures too, of course. It looked like a nice laid back event.

Lovely job on your gown and hat. Making a similar hat has been on my (much too long!) to do list for some time now. :)
-Emily

Me too I like the last picture ,a lady at work.Your costume is beautiful.

Very pretty new gown! The original is so cool - I'd never seen an unlined one before! Thanks so much for sharing your inspiration link!

I love that coat! Is that the virginia cloth from burnley?

Thanks so much for sharing your excellent projects here on this blog. I'm so enjoying learning about your shoe making!
And that last photo is just gorgeous. :-)