I'm going to Gettysburg for Remembrance Day in mid-November, meaning I have less than three weeks to make an entire 1860s outfit.  I swear I haven't been putting it off, I just really haven't had time!  I did manage to pull together all of the supplies I need so I can just work straight through with no delays.
I'm starting basically from the skin out, although I am using my 18th century shift for now.  I based the corset off of the blue silk at the V&A (in their Underwear in Detail book) and the cage crinoline came as a kit from Wooded Hamlet.  Both are *almost* done.  The cage I was trying on for balance and just need to attach everything to the waistband.  The corset is wearable, though I will be adding lace on the top and flossing eventually. 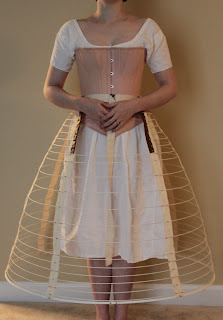 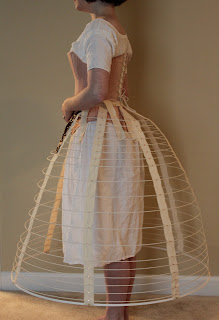 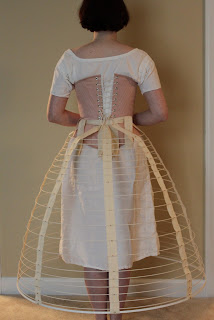 The corset is a layer of cotton sateen (which I dyed) and two layers of white coutil.  I used german plastic for most of the boning.  It was the first time I've used it and I do like it so far; we'll see how it feels wearing long periods of time. 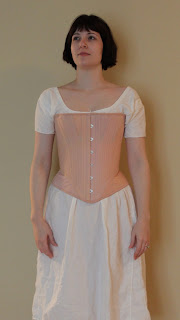 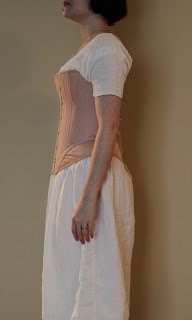 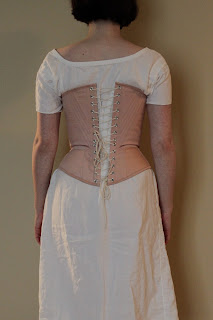 I have a much higher waist in back than in front and I'm still trying to learn how to deal with it (or maybe just lay off the icecream for a bit....).
Considering all I had as of Friday was a basted corset with no boning channels, I'm doing pretty well!
Posted by ColeV at 12:14 PM

also, if you'd like to borrow a pair of Robert Land shoes for the weekend, i have three! they are all a size 7.

Thank you! I ordered a pair (in-stock) from him last week, so they'll hopefully be here in time. If not, I'll have to take you up on that!

I'm going to have to try that cage crinoline kit. It looks really great!

You are doing very well indeed. I really like the color you achieved for the corset.

I have a corset mocked up based on the lines of that blue silk one in the V&A book too! It hasn't made it into its final iteration yet, but it was really interesting trying to follow the lines of the garment in the book for a duct-tape-draped pattern and then the refinements on paper. Did you draft your corset pattern or drape it? It looks lovely, and such a beautiful color!

Lovely colour. I find that corsets of the hip gore style are the easiest to wear. I forget that I have mine on.

Were you comfortable under the armpits? It looks very high - but maybe I have more body fat than you!

The only place it was uncomfortable was the back waist. You can see the wrinkles in the pictures. My waist is strongly tilted up in back and the gores need to be higher. It's on my to-do before next event list.

I'm looking in to getting that crinoline kit for myself. Is it worth the price?

Awesome job! How did you close the bottom (widest) wire banding? (I'm working on the same kit right now and am a little stumped). Thank you!