Happy Halloween everyone! I have to work tonight, so no fun for me, but I at least will be in costume. But, to celebrate I figured I should get the habit up. To preface, it was patterned at a Burnley & Trowbridge workshop. I have previously posted on the riding habit shirt as well. It's made from a pearl green worsted wool, trimmed with silk velvet, and lined with silk taffeta. Style-wise it's a late '70s or '80s. The peaked cuffs, short skirt (too short for pocket flaps even), lack of skirt on the waistcoat, and the narrow collar really date it. So does the hat, but that's a whole different beast (trust me, that was an unpleasant journey). The buttons are silver twist.

From inside to out the shift, stays, shirt, petticoat, and other basic items have been touched upon before. The first habit piece on top of this is the waistcoat. I used a cinnamon silk taffeta for the fronts, both inside and out. The back is a plain linen. Nothing much unusual in stitching here. Edges are done in the tailor style with a spaced back-stitch (rather than the under-hand commonly used in mantua-making). The fronts were made first and all of the seams fold into the back lining area. Note the back doesn't have vents like men's waistcoats. Even if you choose to put a skirt on your waistcoat, the back stays short. 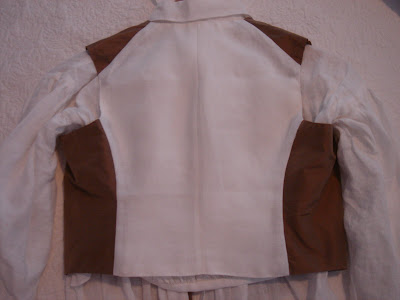 The buttons are simply self-covered wood. The pattern of the waistcoat is the same as the coat, except for the bottom (since mine has no skirt), and adding a small amount to the coat seam allowances for ease. Note the dart just above the bust line, it should happen at the top of your stays. 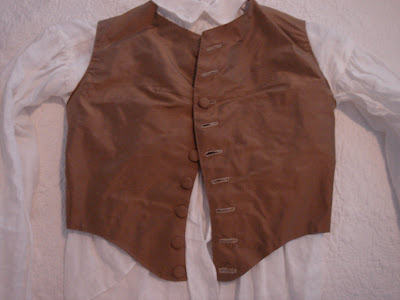 The coat is lined in the same taffeta, except for the sleeves which are linen. That wears better than silk and won't be as fretful to replace when the elbows and armpits wear out. The skirts are inserted up into the body with the lining hiding the seam. Unlike many gowns, the armscyes are closed as well. The back seam is back-stitched, the side seams are done like a gowns with top stitching. 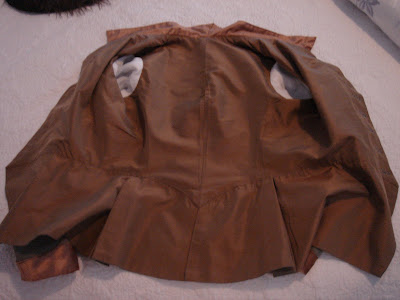 The center back skirt has a vent, while the sides have pleats. They sit under the front section, both front and back fold twice so that the edges do not lay on the same side. Buttons are placed on the top and 1" up from the hem. 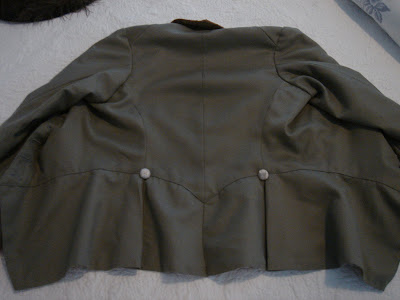 The collar is also lined with the silk. There is no interfacing in the collar (same goes for men's wear) and none in the cuffs since they are stitched on. However, the front does have interfacing pieces to help support the buttons and buttonholes. The waistcoat has the same. I used Russia Sheeting in this case. I've also used a heavy linen before, but the correct thing would be a buckram (stiffened linen). I haven't taken the time to make any yet, but it's not difficult. 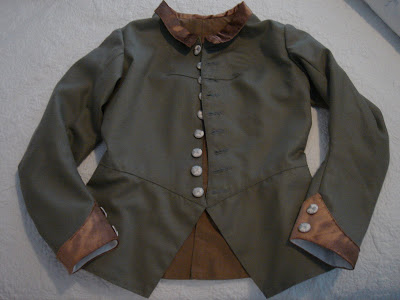 So there it is! I recently finished a men's suit, jumps, and another gown. Once I finally get images of the customers wearing them, I'll be sure to post those! The interfacing in a man's suit does well to inform how riding habits are done as well.
Posted by ColeV at 4:19 PM

How lovely! What an accomplishment. I am inspired. Angela

It's terribly elegant.All you need now is a horse.

Oh wow! Your riding habit turned out beautifully! This is Melissa - I helped drape the habit last year and you draped mine. Mine is still a work in progress unfortunately...

I was wondering if you have any information about hems? I am researching how long the riding habit skirts were, how they were tied up so you could walk in them, and how to make them for modern re-enactment.
Many thanks,
Aylwen

The petticoats at this point seem to be the same length as most petticoats- about 3" or so from the ground. Perhaps a bit shorter if you were planning on trekking through mud or working in it. The really long, trained petticoats for habits seem to be at the beginning of the 18th century or 1790s onward into the Empire period. And I don't know of any points of lift or bustling on those, but perhaps a Regency expert might know more. There's a 1799 fashion plate that just show the woman holding the train up.
At this point hems can either be turned up a small amount (1/2" or less), finished with a wool tape and turned back (like mine), or even just have wool tape folded over the edge and showing.