This week I've started to contemplate what topic of research to post about next.  I though about men's wear and 1800-20 overview of garments.  However, after a few questions about when garments were dated, I though that I might encompass both and expand to doing a large overview of women's and then men's garments from 1760-1820 by five year sections.  It's a big undertaking, but I've wanted to do it for a while. I'm going to stick to fashionable garments, but not to the point of court gowns (those have a tendency to not keep up).  I still have one more color post before this begins, but I would love feedback on it (now would be good, but mainly after the first post so I know if I need to adjust).

On facebook Alexa asked about the back of this jacket from CWF.  Judging from the description it seems to imply that the peplum skirt is separate, similar to a quarter-back gown, rather than extending from the back.  CWF also has another jacket of similar style, which has a back of that type.  I got to see that particular jacket a few years ago, but unfortunately don't have pictures of it (and it's a bit fuzzy on the details now).

I also came across a small bag from the early 19th century, similar to the inked bag that I made through the Burnley & Trowbridge workshop.  It's a little fancier, being painted in color, but is still of home-made quality.  These little bags were probably gifts of friendship, simple to make and a practice of skills. 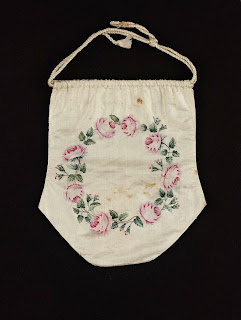 Finally, I asked what people thought of the construction techniques used in the image below.  Mostly, to do with how the petticoat ruffle was finished and attached (pleats, ruffles, etc).  If you have any ideas on how the rest of the trim is done, that would be good to hear too.  I'm sure the rest is gathered, but I'm having a hard time picturing how the turn occurs at the end of the neckline.  It seems to be two separate pieces, but how to make that not ugly might be a challenge! 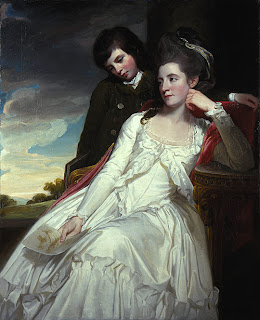 Not surprisingly, the complaint about roll-hemming over 1000" of trim does have to do with this image.  So, here's how trimming the petticoat is going.  Not exactly like the portrait, but I wanted to follow the stripe of the cotton.  This puts them a little broader, and the cotton is much less stiff than her taffeta. 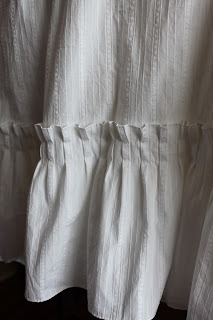