A Treatise on the Propagation of Sheep

Honestly my favorite book title at the bindery, but I promise I'm not doing a post on sheep.  Rather, I need a break from heavy information posts today and feel inclined towards the subject of wool.  Now, I will admit I have not always loved wool, I am indeed a convert to it.  I'm very allergic to wool.  You get me near an angora sweater and I can't stop sneezing.  If I wear a winter coat without a scarf, my neck will break out in a rash.  So, how is it that I came to have 3 petticoats, 2 gowns, 3 pairs of mitts, a jacket, a riding habit, and yards upon yards of waiting fabric made from wool?  And better yet, why is wool so rare in re-enacting outside of military uniforms and cloaks??
At events I often get asked about my clothing, by civilians and re-enactors alike.  The most common question is probably "What is that made of?" (aside from last weekend where my grand feathered hat elicited jokes about seeing me in the royal wedding).  I will admit this is mostly a re-enactor question.  But, the vast majority of the time when asked, I'm wearing wool.  The response often receives a slightly surprised, incredulous look.  I've been told numerous times by fabric sutlers how difficult it is to convince people of the qualities of wool, lamenting over my gown.
When I started making 18th century garments I avoided wool like the plague.  I suppose that should be small pox, really.  It itched, scratched, and wasn't washable.  Why bother?  I made gowns and jackets from linen and cotton, with the occasional silk garment.  I will admit, however, I did lust after a few wool fabrics, just not enough to give in (mostly due to color).  After almost two years the only wool garment I had was a cloak, fully lined of course.  I even avoided wool at work, since it often aggravated my asthma.  When the Fife & Drum received new outfits, I was coughing for weeks.
The moment of weakness arrived when selecting a fabric for the riding habit workshop.  I couldn't get a color out of my head, I had seen it in a wool and couldn't imagine it any other way.  I gave in and purchased a light green worsted wool and completely fell in love.  It draped beautifully, the seams pressed out nicely, it held it's shape, and was so easy to work with.  I told myself that this would be the one wool garment I would have, since there were always two or more layers between the wool and myself. 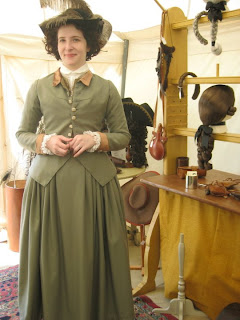 It goes so quickly downhill from there.  Honestly, I blame Burnley & Trowbridge.  They brought in three colors of the most exquisite camlet (mix of silk, linen, and wool).  I'm not ashamed to admit I purchased some of all three.  I made a Robe a l'Anglaise from their cinnamon color.  I have plans to make a Regency riding habit from the blue and possibly a Civil War gown from the beige (which I've also made a men's suit from for a client). 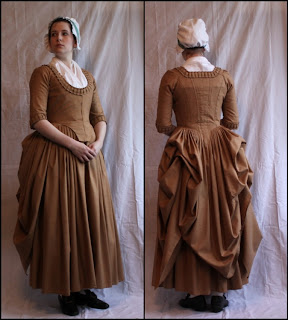 Then came my pirate costume last summer.  The lightest weight worsted I have ever felt in claret along with a mix cloth of wool and silk for the petticoat (if only you could see the way it shines).  I also discovered an amazing thing that summer while working outside almost every night.  My green wool petticoat from my riding habit was just as light as my linen petticoats!  Granted I couldn't wear it without an underpetticoat, but it breathed so nicely and never had the damp clingy feeling that linen could. 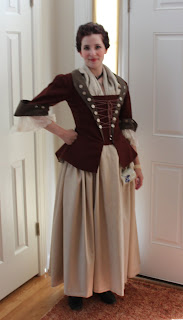 I gave up all arguments against wool by last fall, purchasing some chocolate worsted wool for a gown.  I have some of the same in light blue, originally planned for another gown.  However, the current one is holding up so well I won't need the blue for a long time (compared to my first linen gown, which is in a sad state).  So, it might feed my sudden obsession with Tudor clothing instead. 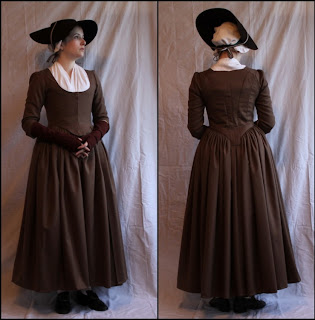 It shows no sign of stopping, seeing as I just found yellow camlet from Wm Booth last weekend.  So next time you come across a beautiful woolen, don't pass it by.  It makes up into beautiful and durable garments (and fire proof!!).  Women of all classes would have worn it in the 18th century.  Especially with that English wool monopoly!  They wouldn't even sell us the darn sheep.
But, more on the research side later.  I'm still working on a series of posts about fabrics and colors, but it's grown into a very large idea.  I suppose this is a good way to start though!
Posted by ColeV at 11:40 PM

Wool is a lovely meterial!

Reenactors being against wool must be a regional (and possibly era-related) thing - I don't see much of it here. Indeed, most reenactors or living historians in Europe would't be taken seriously if they didn't use wool....

Mind you, I don't reenact 18th century (late 14th is my main era) so I might not have all the info. I'm working on one 18th century outfit just for fun, and it'll be made from wool.

I completely agree. I have worked with wool just a couple times, but what a fantastically easy textile, in all its forms, to work with. I don't have nearly enough wool thingies, but that'll change soon, as I've found a local source for all kinds of wool (wish they had that much silk, too, but alas). I don't have any opportunity to re-enact or even play dress up for 18th c. daywear here, but I do plan some wool garments for Elizabethan and 1850s-60s. :-)

If I could get wool that was even twice as expensive as the places you mention, I would probably make all my clothes out of wool, historical and otherwise. For twice the price Burnley & Trowbridge is selling their nice stuff, you can get an ugly 50% wool 50% polyester here. It probably costs an arm and a leg to ship overseas from them but worth investigating. It costs $50 to $100 USD equivalent per metre to buy that type of fabric here, so it would be worth the shipping if one could afford it and was going to get it anyway. I am so jealous of USA fabric prices.
Lovely clothes, I really like the quite simple style of dresses best.

I love the drapiness (yes it's a word) of some wools. I made a Regency jumper from a lovely blue wool. I have a good source here, but am very tempted by the camlet! And I am sorry you're allergic! Just thought I'd also point out, angora is rabbit fur, actually, but it's usually mixed in with wool, but perhaps you're also allergic to bunnies? :)

Wool and silk are my personal favorites for everyday, modern wear. Both are protein-based fibers with superb abilities to heat and cool the body, to breathe.

Does Burnley and Trowbridge stock and of the old-style glazed wools? I forget what glazing process was called, but can see the woodcut in my head: an image of a big wooden press in which squares of wool were laid, and then heat and weight applied.

I love wool! Just made my first gown out of a lovely olive brown wool in March. Needs a little fixing but beautiful.

Natalie: Do you mean Calimanco? The only place I know of making that is Eaton Hill Textile. I'm sure it costs a fortune, but it is on my wish list to make a pair of shoes from (since I only need a yard).

A lot of us up here in New England love wool-I was just given a lovely borwnish-grey wool gown that I wear all the time now to events,a nd I also have a nice warm grey wool greatcoat-it's so much more breathable!

I too am a convert to wool and LOVE it! The rest of the world should be converted too but then we'd have to fight them for the wool, so maybe not.
Your dresses are amazing.

PS Angora isn't wool. It's either from a rabbit or a goat depending on the manufacturer and how accurate they are with their terminology. It's often mixed with wool though.