Revamping a Pair of Shoes

What to do with an old pair of black leather 18th century style shoes?  The leather is beaten, worn, wrinkled, and as I now know, of very poor quality historically.  That relegates them to being rough shoes to wear in the mud and dirt.  Only problem is, the sole is so thin I'd feel every bump!  More like dance pumps than anything.  Solution?  Pull out some fabric, ribbon, and hot melt glue! 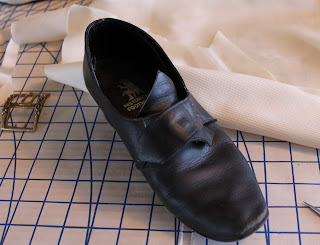 First step was to choose fabric.  I had a scrap left over from my white stays, a rather heavy herringbone weave of linen and silk.  I pulled some matching white silk grosgrain ribbon and light-weight white leather (for the heel).
I trimmed the tongue and straps to points for some variety.  I didn't want to work around a curve on the straps and you so rarely see pointed tongues now, despite such popularity in the 1780s.
You can see just how beat up these poor shoes are! 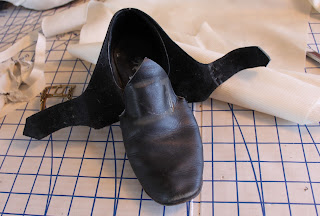 Next I clipped the stitching that held the quarters and vamp together.  It will make it easier to lay the fabric on the vamp, then stitch it all closed in the end. 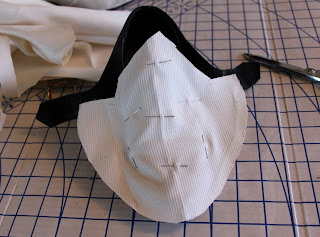 I pinned the fabric to the vamp first.  It's a rough cut, but I'll trim the excess off before attaching it.  I leave a scant 1/4" around the sole to be turned under and glued.  The rest will be trimmed off when I bind.  The key to this fabric was getting the lines fairly straight with the shoe. 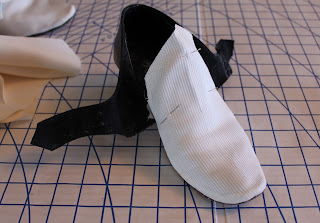 I used hot melt glue to fix the folded edges down, poking them as far in the crack between the sole and upper as possible.  This is where a darker or more solid fabric would have done better, since you can just see the color difference around the edge.  But, it's what I had and it does then go with all of my formals! 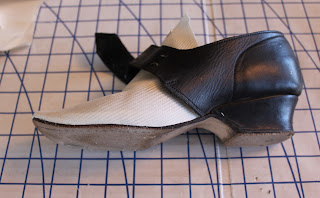 You can see the edges better here.  Not too bad for the easy way out! 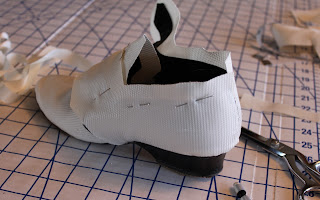 I then pinned on two rough pieces for the quarters.  I cut the edges at center back, not folding them or attaching together as you'll see why later.  I did put a small line of glue under each side though.  Glue down the bottom edge just the same as the vamp. 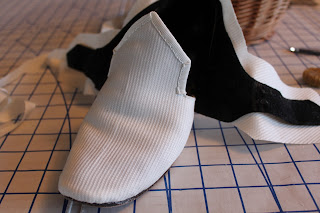 Next comes the part that really makes it looked professional: binding.  I folded the edges under at the base of the vamp tongue rather than bind and end up with more bulk.  The quarters get stitched back on to that section so it isn't visible.  The rest is trimmed down to the edge or just past.  If you leave any allowance the binding is more likely to push back at it and bubble unless you use dozens of pins.  I just used a running stitch to attach the ribbon (small dot on the outside, longer on inside). 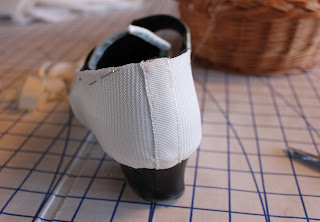 Before binding the quarters I placed a small strip of ribbon down the center back to finish the seams.  Since there is so many extra re-enforcement layers in the heel I just stitched to the fabric and not through the leather (reason for small strip of glue).  The bottom edge is folded under, the top left raw to be bound over. 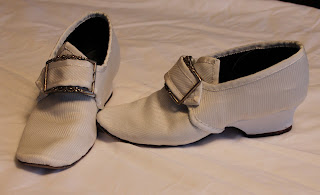 Once the binding was done around the quarters, I stitched them back down to the vamp at the sides.  The heel I covered using white leather (pliver) and rubber cement.  I used a small flathead screwdriver to push the top cut edge into the small separation.   I had to put new sole leather on the heels anyway, so I just removed the old and pasted the leather down around the edge.  I'm not sure if I'll use these buckles, but they were with the shoes.
No where near as pretty as a properly made pair, but they'll do for the next few months until I finish my first official pair.  As long as the sole doesn't wear through that is!
Posted by ColeV at 2:38 PM

Very cool. They need more decoration though. Perhaps rosettes to match whatever you are wearing?

Lovely, and how inventive! In a color or maybe a brocade they'd be even more stunning.