Military Through the Ages

This weekend my housemate and I decided to get out of the house and go to Jamestown's Military Through the Ages.  And two costumers can't just go to a historical event, they have to dress!  It is a very interesting event though, traversing dates from Charlemagne and Vikings up to WWII and modern military.  Wonderfully anachronistic.  I know there are events similar to this all over the country, and I really do recommend them, especially if you're considering a new time period or living in a new area.  My housemate, Gwendolyn, is fairly new here and had a great opportunity to chat with the local Civil War re-enactors about upcoming events and groups to join.  After seeing some of her lovely 1860s gowns I'm quite inspired to make some of my own.  But, that is to come later.
We decided to go in 1812 attire because there aren't enough excuses to wear it around here, and it's so terribly comfortable.  So, here is a simple shot of a gown I'm going to do an inside-out on in the near future.  It's just a simple un-lined brown muslin that came from a Burnley & Trowbridge workshop.  Shift, corded corset, and underpetticoat worn underneath.  The bonnet is actually a modern hat that was hanging out in the closet never being worn, a little ribbon and tacking up the back and it has a life again!  Gwendolyn made her ensemble, a lovely dotted swiss gown and silk velvet spencer.  And she made the bonnet from straw braid, giving me another great inspiration to attempt!  I also really need to make a chemisette.... 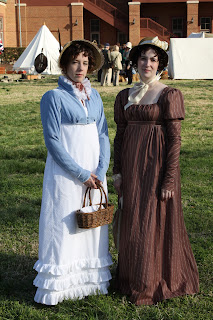 I love how you did the undersleeves on a diagonal! Now you need to make it to the Jane Austen Fest in Louisville!

Hotel reservations have actually already been made! I'm very excited about it!! I have a number of garments to finish before then though.

You both look stunning!