Parasols seem to be quite fashionable and diverse in the late 18th century.  I found images of tiny ones and "market umbrella" sized ones as well!  Check out The 18th Century Notebook for a great list of images.  So, I went onto eBay and started searching for antique parasols to see if anything fit the bill.  First rule was a wooden handle.  No plastic, bakelite, or bone (starts to crack if not cared for); tortoise or horn might be acceptable.  I was hoping for either a very simple ball end or a handle at a right angle.  I didn't expect to find baleen for spokes (metal started in the 1850s), but they needed to be functional and in tact.  The fabric was unimportant since I was going to recover it, preferably there'd be at least one panel together to use for measure.  And I wanted a medium size, about like a regular umbrella today.
What I found was that parasols sell for a wide variety of prices.  It all seemed to be centered on how pretty and in tact the fabric was though!  So, I found a plain black umbrella, late 19th century (the mechanisms say 1888 on them, but I don't know if it's a year or model number).  The wood stick and handle were painted black, there was a bit of carving, but nothing exciting.  The fabric was also plain black, minimal damage, with only a small fagoted seam for decoration.  Boring.  And therefore cheap!
I started pulling it apart before taking any pictures (oops!). 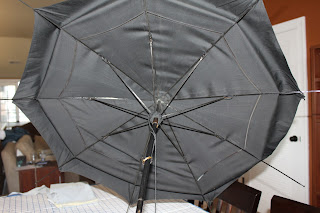 This parasol had obviously been well used and loved.  The tip was worn down and the areas inside fabric were storing a lot of sand and dirt. 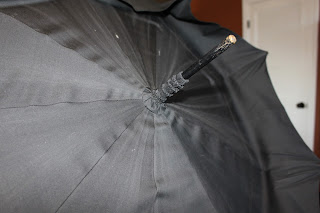 They had added gathered pieces to hide the mechanisms, I wasn't really sure if I wanted to do that as well. 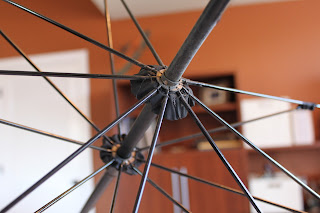 There were also small circles of fabric over each joint, probably to keep those from wearing at the main fabric. 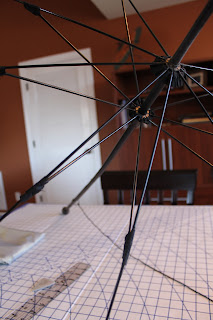 I pulled out one panel (didn't take long since the stitching was rotting).  I added a bit of extra seam allowance to be trimmed away later.  I used a blue/yellow changeable silk taffeta. 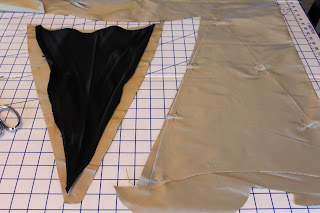 Once the canopy was stitched together and seams were finished I went to work on the small pieces.  I added the small circles to the joints, then a pinked circle at the very top inside. 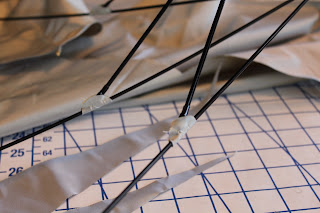 The original had a metal ring which had a long cord and tassel attached to it.  I couldn't find any examples where they used a closure, except for a small tab on a MFA extant (but no good closeups), so I didn't replace the cord.  I kept the ring on since it fits over the ends and keeps them closed, but doesn't get in the way. 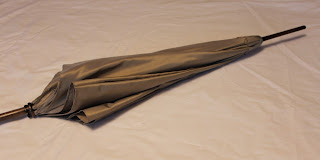 I didn't have the sizing perfect on the canopy, so there is a little bit of wrinkling at the top.  I covered that and made a nice finished opening with a flat, pinked piece of fabric.  There are a few paintings that seem to show a top piece like that. 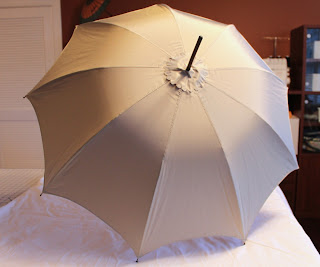 I also sanded and stained the wood.  The black paint was worn and chipping off, not to mention not very pretty.  I sanded it as well as I could, then used an ebony stain and oil finish.  The carving stands out a lot more now and the wood grain has a nice antique look. 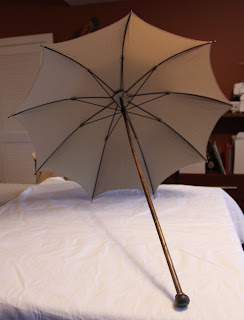 You can see the small piece inside the top to hide the mechanism.  It also allowed me to stitch the canopy to it and keep it from pulling off the top.  I pinked two circles, folded them in half, then slit an opening in the middle.  Placed around the stick and stitched to two halves together. 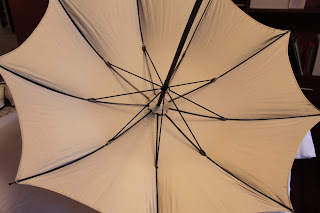 Hopefully I'll get some better pictures out and around town soon!
Posted by ColeV at 6:01 PM

This is awesome! What a cool project, and the fabric you picked is fabulous. I can't wait to see more photos of the parasol in action!