I realized yesterday that there are many garments I've never posted.  Even some that I had shown or talked about progress with!  I'm still in the process of taking pictures of everything I've made, so here are a few different styles of jackets that I've created over the last three years:

Caraco Jacket, based on this original in the V&A.  The fabric is a cotton chintz from the Williamsburg collection that came out a few years ago.  My biggest issue was the unusual shape of this garment.  It was clearly made from either wide fabric, or was short enough to use it lengthwise.  Unfortunately not the case with mine, so there are some hidden seams in the back.  The fronts are fairly normal.  The bodice and skirt are one piece.  The facing is folded back and opens up below the waist.  The side seams have pleats inside of them as well.  There is a separate stomacher which is pinned on, then three sets of tabs extend across it.  I wove the kerchief between them.  The sleeve cuffs are pulled up by a cord over a button, with a small pleated trim.

The back is the unusual part.  I must admit I spent hours looking at the photos of the original, mapping out the chintz they used to see angles and possible seams.  The center back pleat is just like a Robe a l'Anglaise, but just one instead of the normal two.  What gets weird is that the sleeves are of the same piece as the back.  Why?  I have no clue, but it was a fun challenge to drape.  There's no center back seam, and a small tuck is taken at the waist to shape it.  I need to make a few alterations to the petticoat, it being too short and a little narrow for my taste. 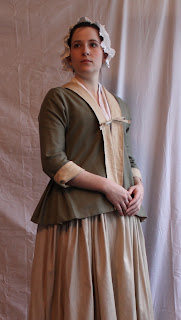 Bedgown, patterned from Diderot.  I know there is a commercial pattern based on this, but I was curious to see what alterations had been made from the original.  If you've ever seen it, the most obvious thing is that mine is a great deal shorter.  The exterior is a worsted wool with a heavy linen lining.  I wish the sleeves were longer, but I was using leftovers and ran out of fabric for that.  The front ties with linen tape, and you would usually wear an apron over it.  It's really all one piece with the seams up the sides, very geometric design.

The back has a very deep box pleat that opens at the waist.  I'm still struggling on how to make the collar  part of the main garment and get it to lay correctly.  The longer you cut the collar in back, the further down you're cutting into the back neckline.  The modern patterns fix this with an added collar piece, but I wanted to see if I could follow the instructions exactly.  It works, but pulls a little funny.  Would probably fit a woman with 18th century posture better since their shoulders sit further back.

Fitted jacket, from the Snowshill collection in Janet Arnolds book.  I did make the cuffs a little smaller.  The front pieces have gores put in to allow for the hips.  I think mine needed to be a little larger and definitely taller.  The cuffs are simple pleated bands, whipped on.  The front pins closed.  It's just a light weight linen, meant to be a good summer weight.

The back has excess in the skirts at the seams, cut with extra "pie" wedges to create the fullness at the hem and not the waist.  I'm still struggling to keep them looking decent, but I think it's the fabric. 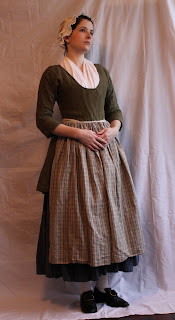 Short gown, which I don't really know provenance for.  I've made dozens like it for where I used to work, and it's one of their fairly recent designs (so it's well researched I'm sure).  It's very simple though, being a singular piece and unlined.  There are facings on the sleeves to allow them to fold back.  The center front laps over and pins shut.  Edges are simply rolled to be finished.  This is my lightest garment, made out of complete necessity for a Virginia summer. 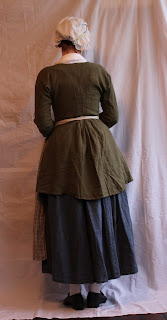 The back has pleats sewn in similar to a Robe a l'Anglaise to fit the garment to the body.  There is a small piece used inside the back neckline to face it, rather than rolling the pleated edge.  By far one of the easiest things I've made.  I cut one out for my mother and handed her this as an example, which she completed easily in a weekend.  She's a beginner to historical costumes, only having made a petticoat and apron prior to it.

A quilted waistcoat isn't quite a jacket, I know.  I did a post on this a while back, but these are much better images.  Based on an original at the Atwater Kent Museum.  Sharon Ann Burnston wrote an article about it here.  Mine is a cotton chintz with linen lining, bamboo batting, and linen tape binding.

A very simple design, it could be worn around the house for lounging, or along with stays for warmth.  I sometimes wear it under a gown, occasionally over if the gown is not large enough to accommodate the added width.  It isn't meant to be worn on it's own however.  Namely, it's not a bodice!!  I wouldn't wear it as the image shows in public.

Very beautiful jackets!! I would be very interested in the making or your cap, as I'm planning on making one of my own very soon!

I was just thinking about doing a post on caps, in fact. I've got three different styles around, but there are so many others. I've actually been considering making one of the over-the-top fluffy Regency styles as well.

I love how the conference has encouraged all of us bloggers to step up our postings! :-) It's been such a treat this past week!

This fantastic collection of garments has reminded me of a question I've never found a satisfactory answer to: what distinguishes a bed gown from a short gown? The folded back collar alone? Or do bedgowns typically have the inverted box pleat vs. the anglaise-esque fitting pleats of a shortgown?

I've always thought of the difference being in a bit of shaping and the fitting. Short gowns tend to have an actual cut neckline, some gather up. They also tend to have some fitting (hence the pleats in back). Bedgowns are very loose, only brought in by the apron. Usually straight down in front, like mine, or a folded back angle to open the neck, crossed over in front to close. The box pleat in mine is not to fit the bodice, but to give extra to the skirt. I've seen many bedgowns that have no pleating in back as well.

Oh yeah I love the regency caps, I am using my regency bonnet for my rev war encampments doesn't look quite right... So I have been looking at pictures to make a ear'd cap with ruffles and a colored ribbon to secure it. Just like your cap in your pictures. What weight and fabric did you use for yours?

Lightweight linen, usually called handkerchief weight. It's a good place to invest in the nicer stuff, the discount fabric stores online or locally sell cheap stuff which is light weight because of loose weaving, not fine threads. Some are made from cotton or silk gauze, but you basically just need a very light weight fabric with some stiffness to hold the pleats. Oh, and the ribbon on both of those caps is just pinned on, it really offers no help in securing. The drawstring in back tightens the cap to fit, and a hat pin can help on windy days.

Thanks for all your info, you've been extremely helpful!

I have chintz on order for a jacket. I made one recently with the pattern I purchased from the CDC. The next one I am going to alter to accomodate stays.
Laurie

The article on the Atwater Kent quilted waistcoat was actually written by me. I have resurrected it here:
http://www.sharonburnston.com/quiltedwaistcoat.html
Glad you found it useful!

Yay! Thank you! I was so sad to find the link broken, it's such a useful article on a rarely studied subject.

You are so welcome! And please spread the word. That article was often-cited, and now there are many dead-links for it, which could be updated.

I love your clothing...all of them! Can you please share with me,where you get your patterns.I am a beginner seamstress and the only pattern I have ever used,is the Simplicity Colonial dress.I love your jackets and skirts.They are so very lovely.Thank you.

I only really use patterns for pieces post 1920, all of the earlier garments are made by flat patterning or draping (to use modern terms) as would have been done by gown makers of the period. There are some great pattern books out there like Janet Arnolds or Norah Waughs series that require scaling and adjusting to fit.

What is the pleated white piece at the neck called ?

Sue: The white piece around my neck area is a kerchief. In this case it's just a square folded in half to create a triangle, the narrow points at the front. It can be worn over or under a jacket/gown.

I'm sure as soon as I leave this comment I'll find the answer elsewhere, but so far I haven't. Would a bedgown have been worn outside the house, or was it an inside-only kind of garment?

You do see bed gowns, short gowns, and other styles of jackets worn outside of the home by working class women. Upper classes were more likely to wear gowns, but shorter styles like the Sack jacket (Pet-en-l'air) or the Caraco were fashionable as well. I'd recommend looking up art work by John Collet, he often pictures working class people and there are quite a few styles of women's outer garments.

I found a few sites that show re-enactors wearing bedgowns for outdoor work, so between that and your comment, I hope it will satisfy my ten-year-old who wants to make her own costume for Colonial Day. Thank you!