Spending the better portion of 8 months in 18th century attire meant that I put a fair amount of wear on my shoes. Even the newer ones. I figured this would be a good time to show you how much abuse these shoes can take before needing repairs or retirement. Of course, this isn't really comparable to 18th century wear since they weren't walking on paved roads, brick sidewalks, and gravel everywhere they went.

We'll start with the oldest pair that was worn. Technically my second pair, but the first didn't fit well enough to be worn often. So, a reminder of where they started out: 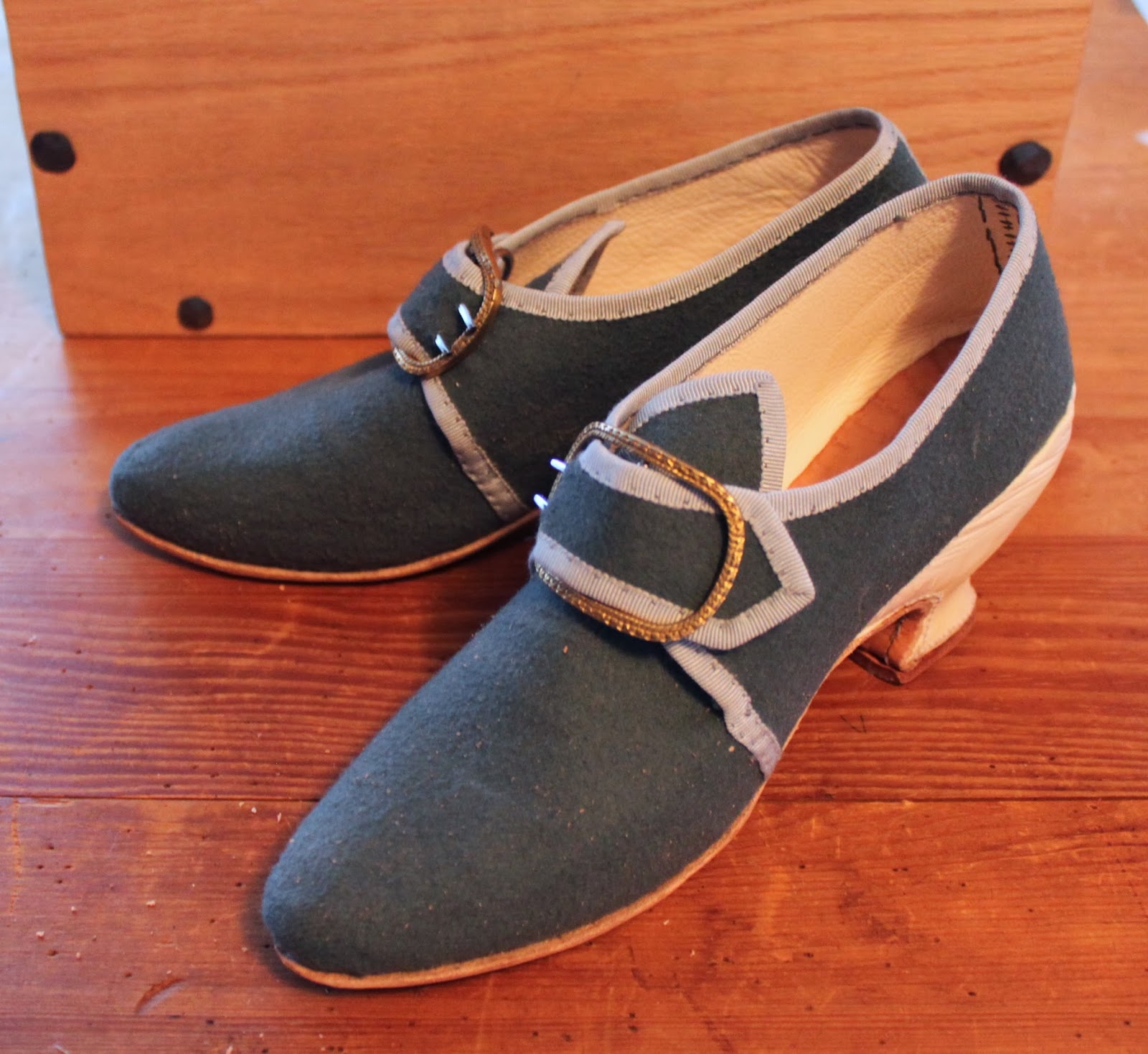 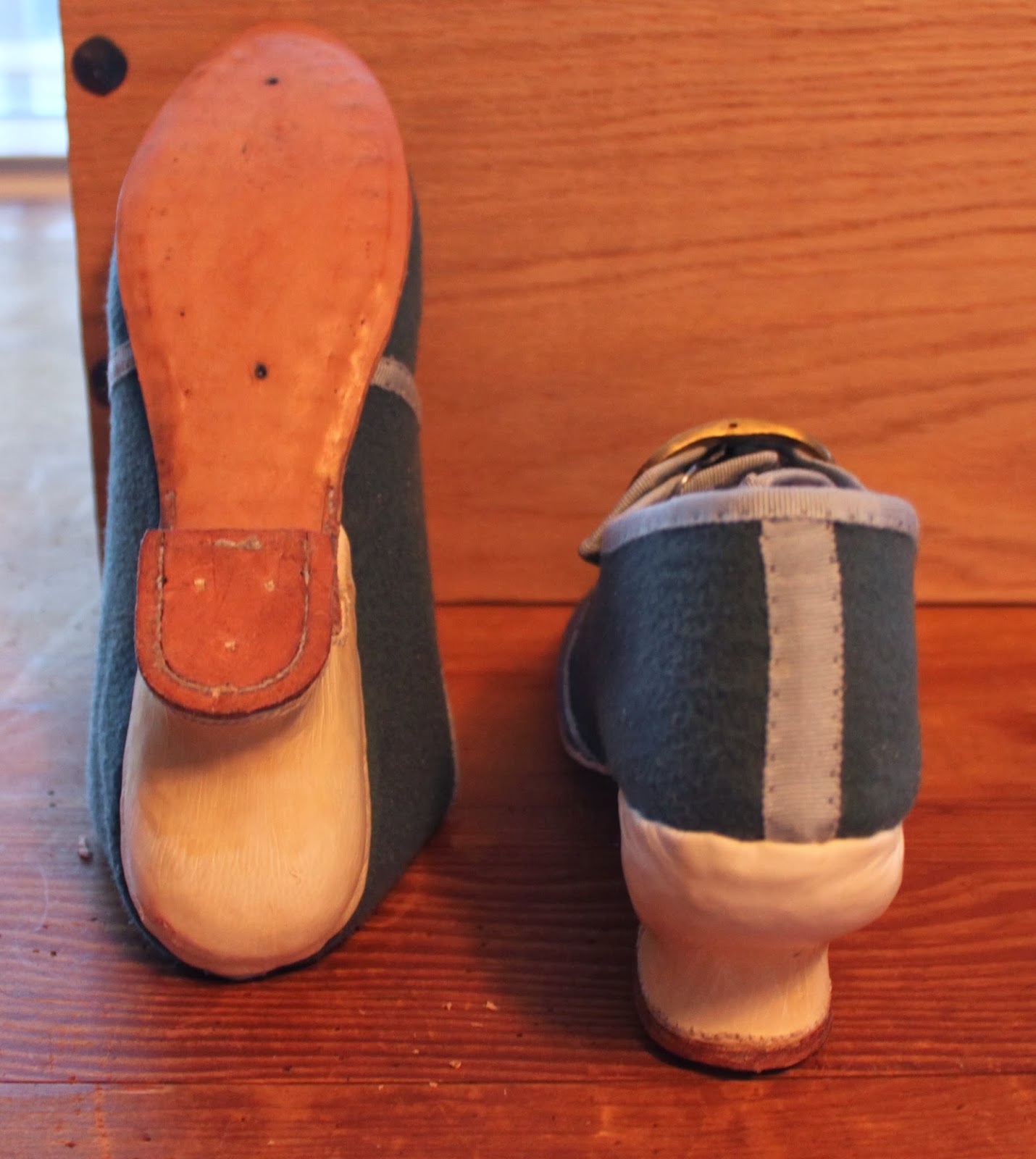 Fortunately for me (I can't say the same for the shoes), these were almost entirely worn during my evening programs job of walking a fairly consistent route down the street every night. I was able to add up the number of nights I worked with an idea of how much I walked every night. It came out to about 500 miles. On pavement. Also, they went through a massive flood more than once- puddles past my ankles.
The damage is almost entirely to the soles. The wool uppers are a little pilled and stiff, but the stiffness is because of the whittaw lining and the paste between the two layers got soaking wet. The only other damage is due to my choice of stitching method at the side seam, which I've since changed. The soles, however, are completely worn through. If I had decided to save them earlier I could have "clump soled" them, which you'll see later. I also could whiten the heels with pipe clay- the cleaner heel I simply washed off and burnished a bit to fix it as an experiment. 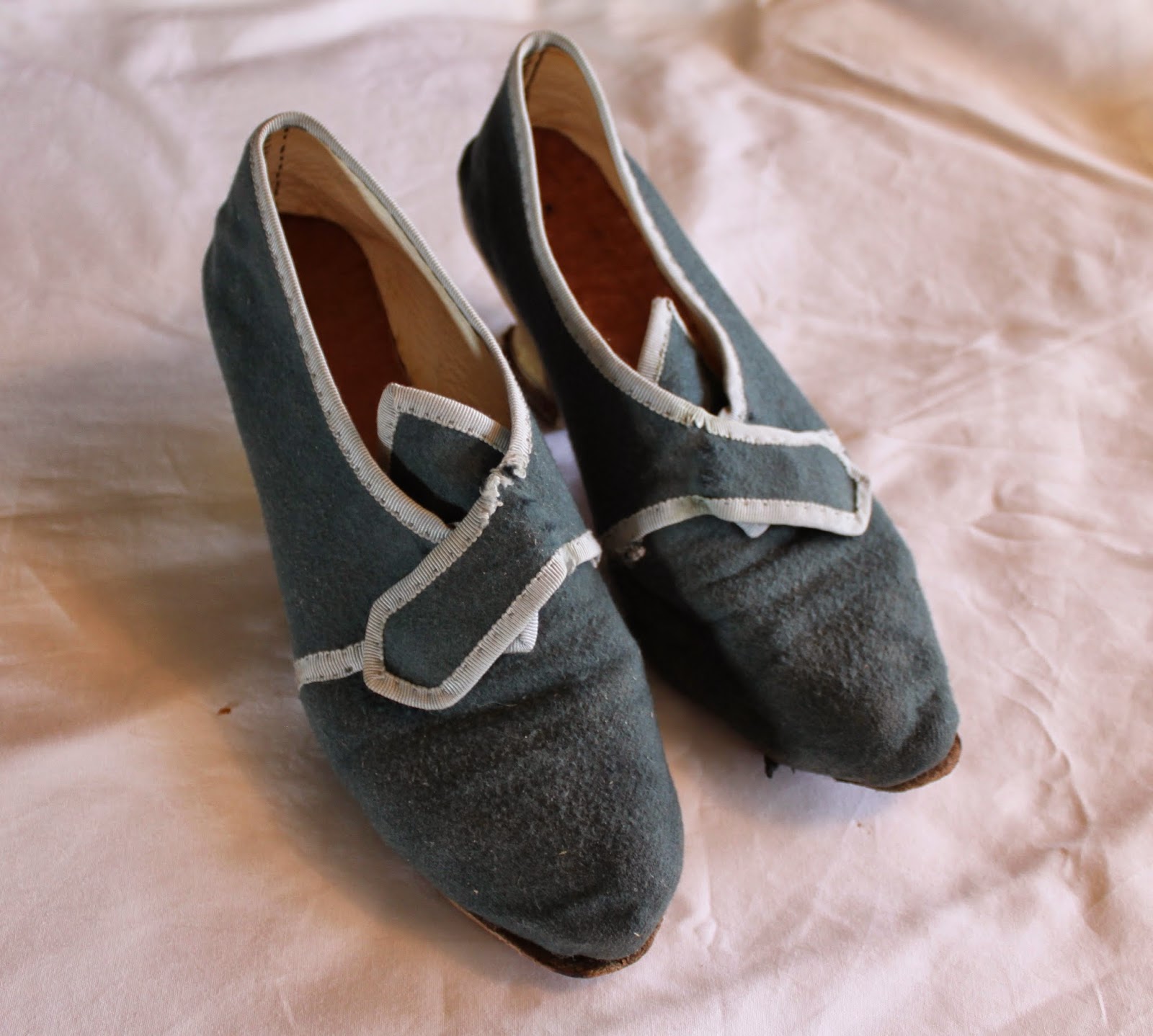 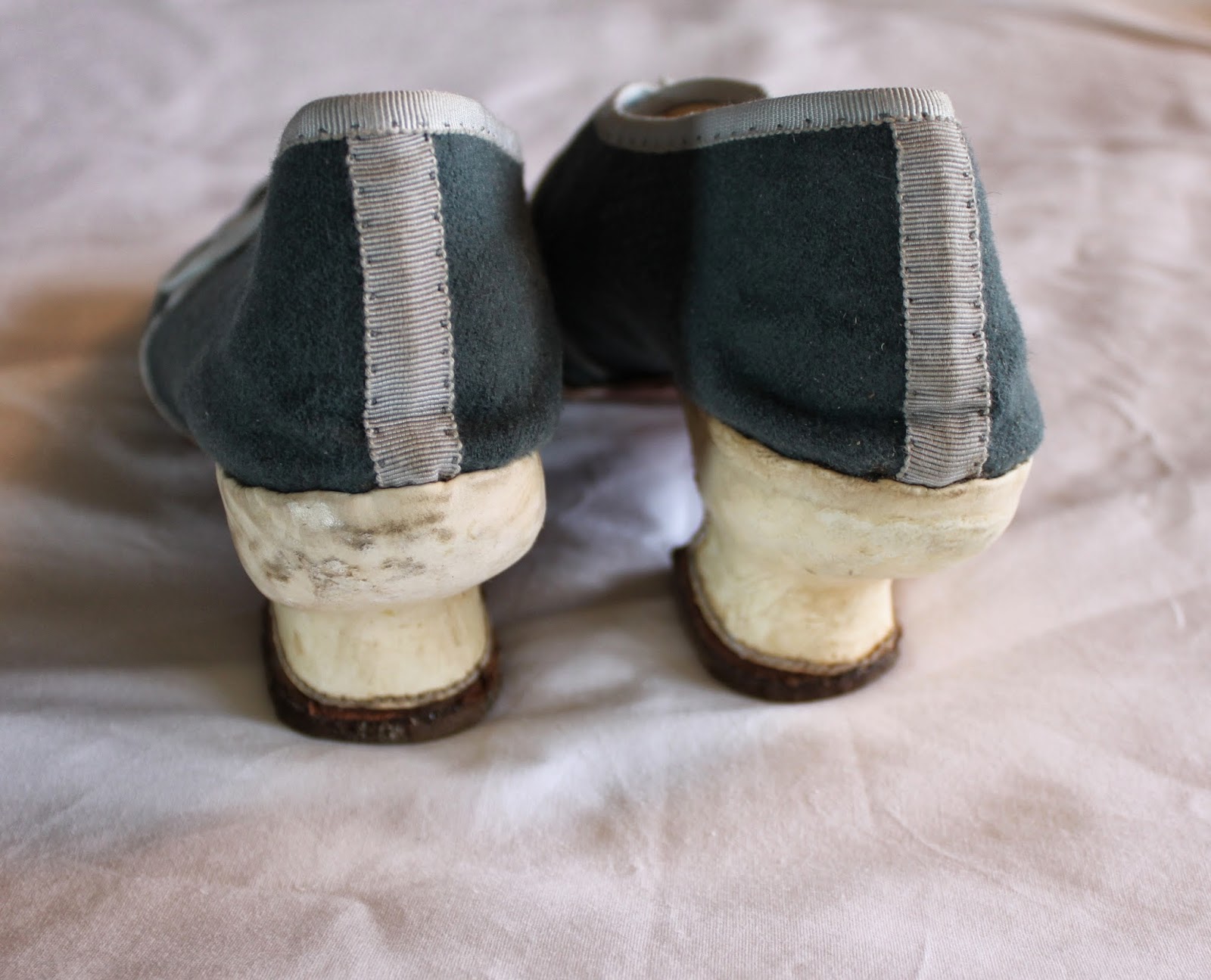 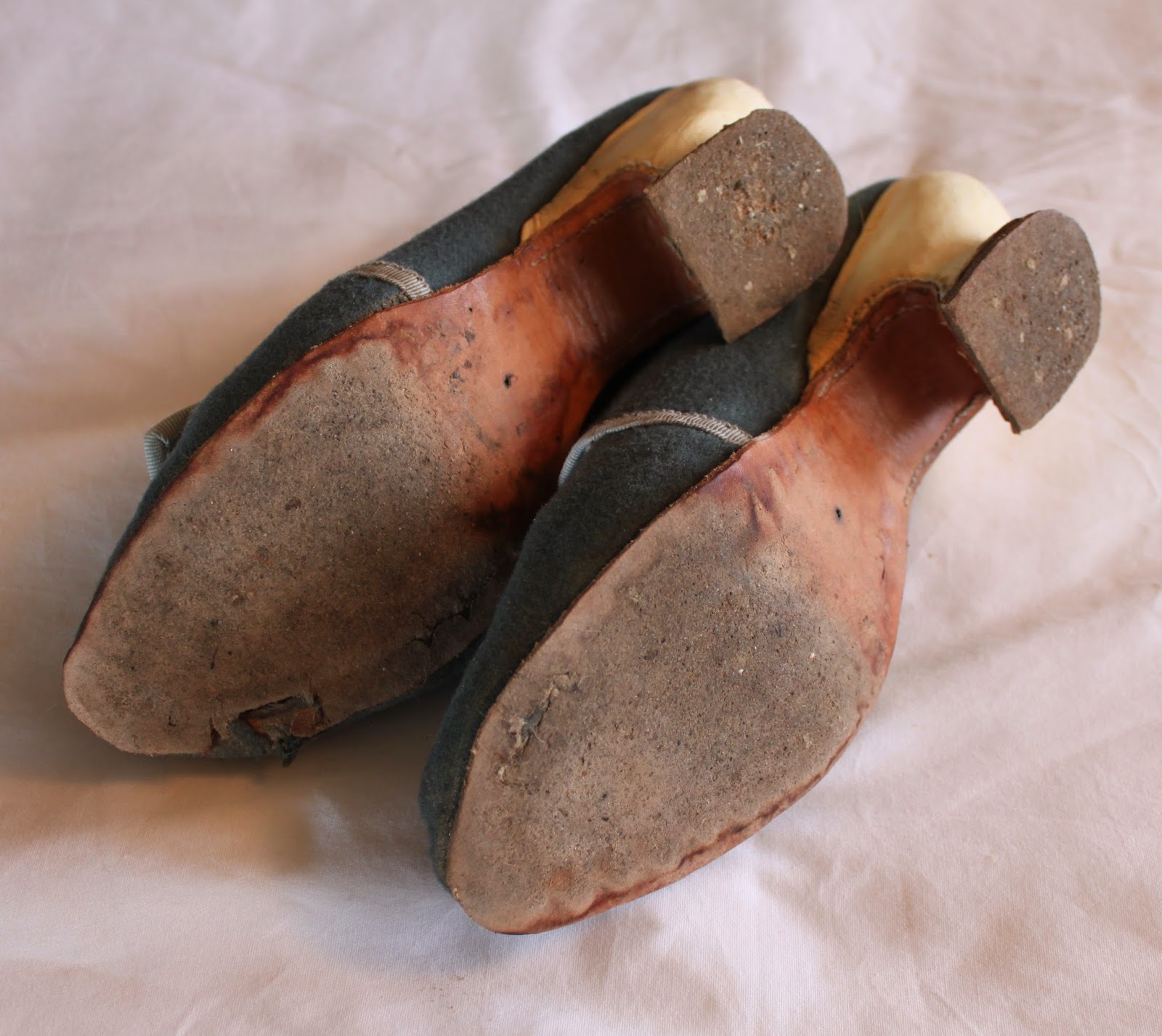 Same construction method, but with far less wear are my red shoes. They don't look much different from their start except for the soles. I've worn them a number of times, but they haven't been meant for long-distance walking in the same way. The cut you see on the sole isn't from wear, but a mistake in construction (common to start with, thankfully I've moved past that!). I'm almost done with a pair of overshoes to fit, so there won't be any more wear on these! 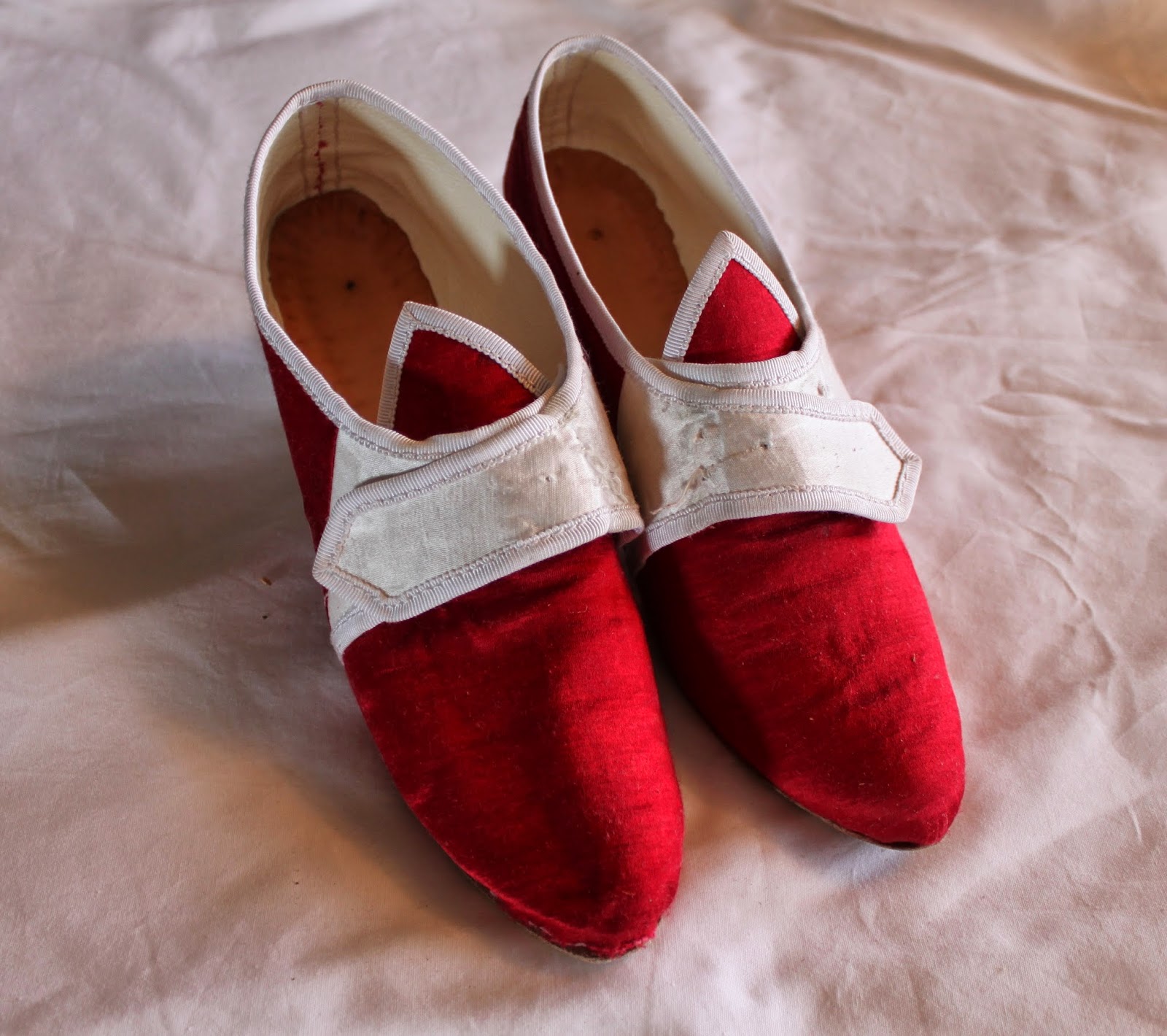 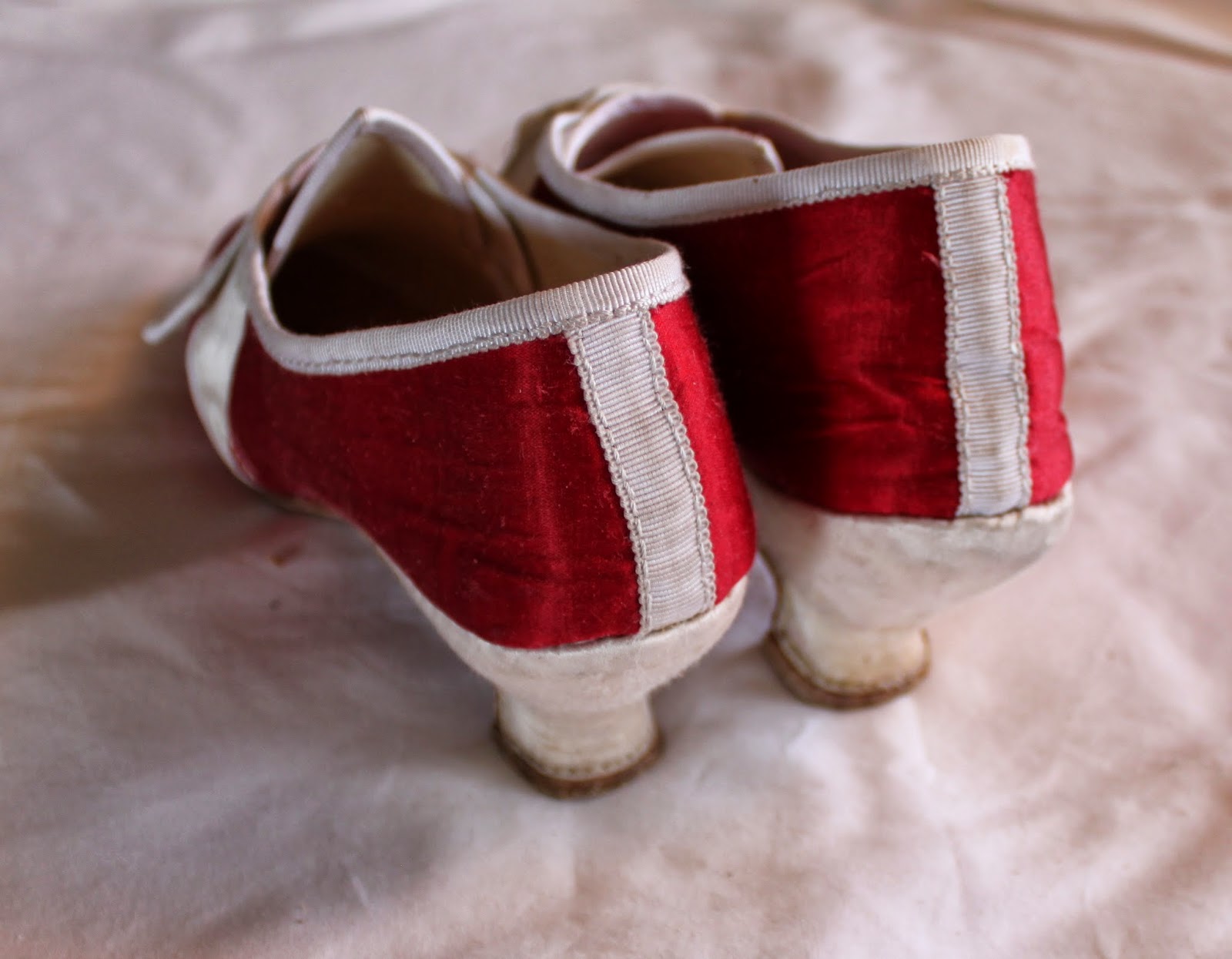 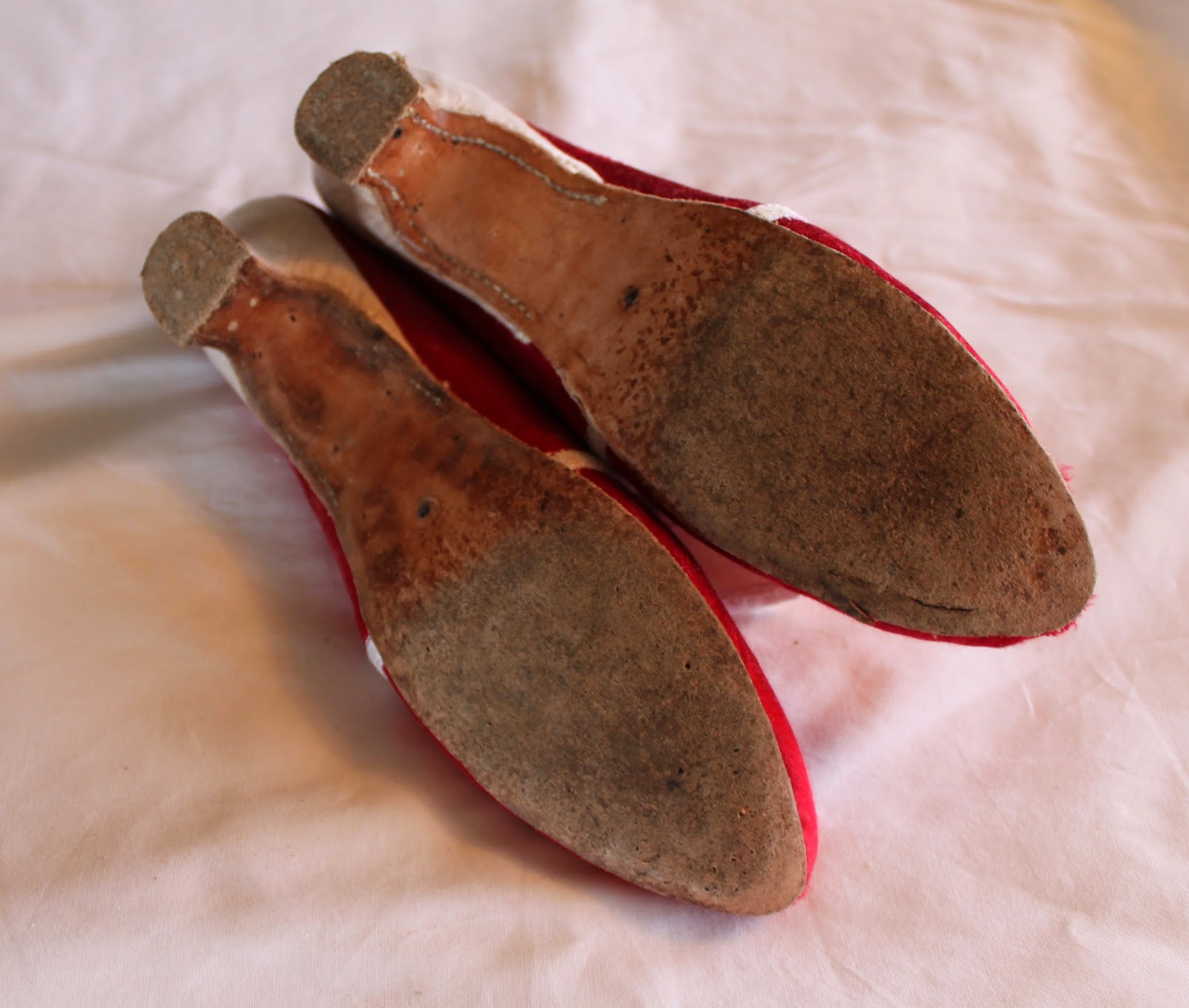 Now, the workhorse. Again, the uppers look just broken in. I've blacked them once to bring back some shine. The soles, however, have had numerous surgeries. The most common fix for shoes is to add on a new heel cap. You simply peg and paste this piece on top of the old rather than removing the stitched on cap. Sometimes I'll peg on a piece even before wearing so I don't have to worry about wearing down the leather too far. I don't know how many times I've replaced that cap on these- maybe 6? They're also clump soled. Meaning I wore down the sole really thin and stitched a second sole using the edge of the first as a sort of welt. It does make them a bit thick soled, but they're for wearing hard. And believe me, I have. 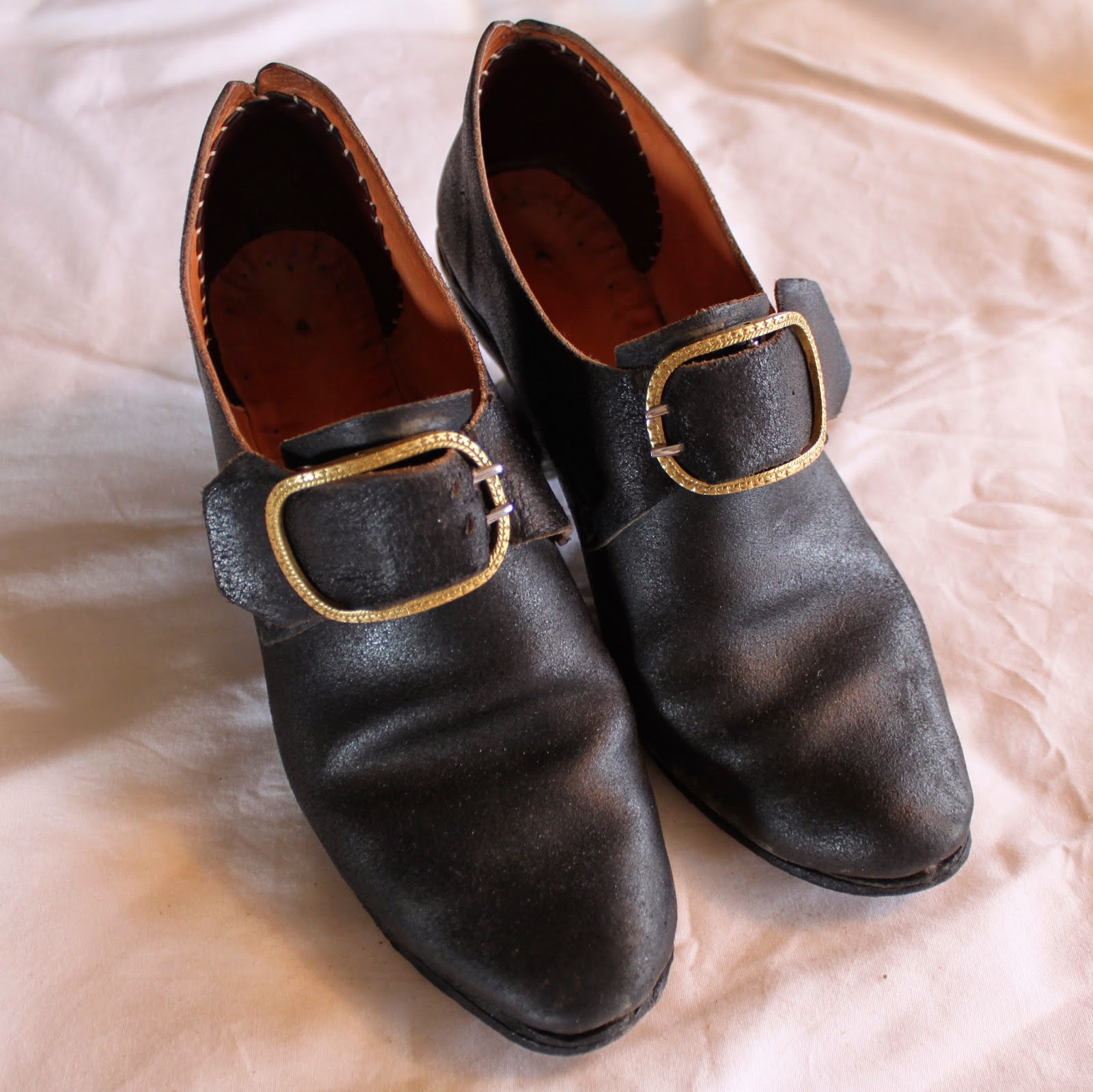 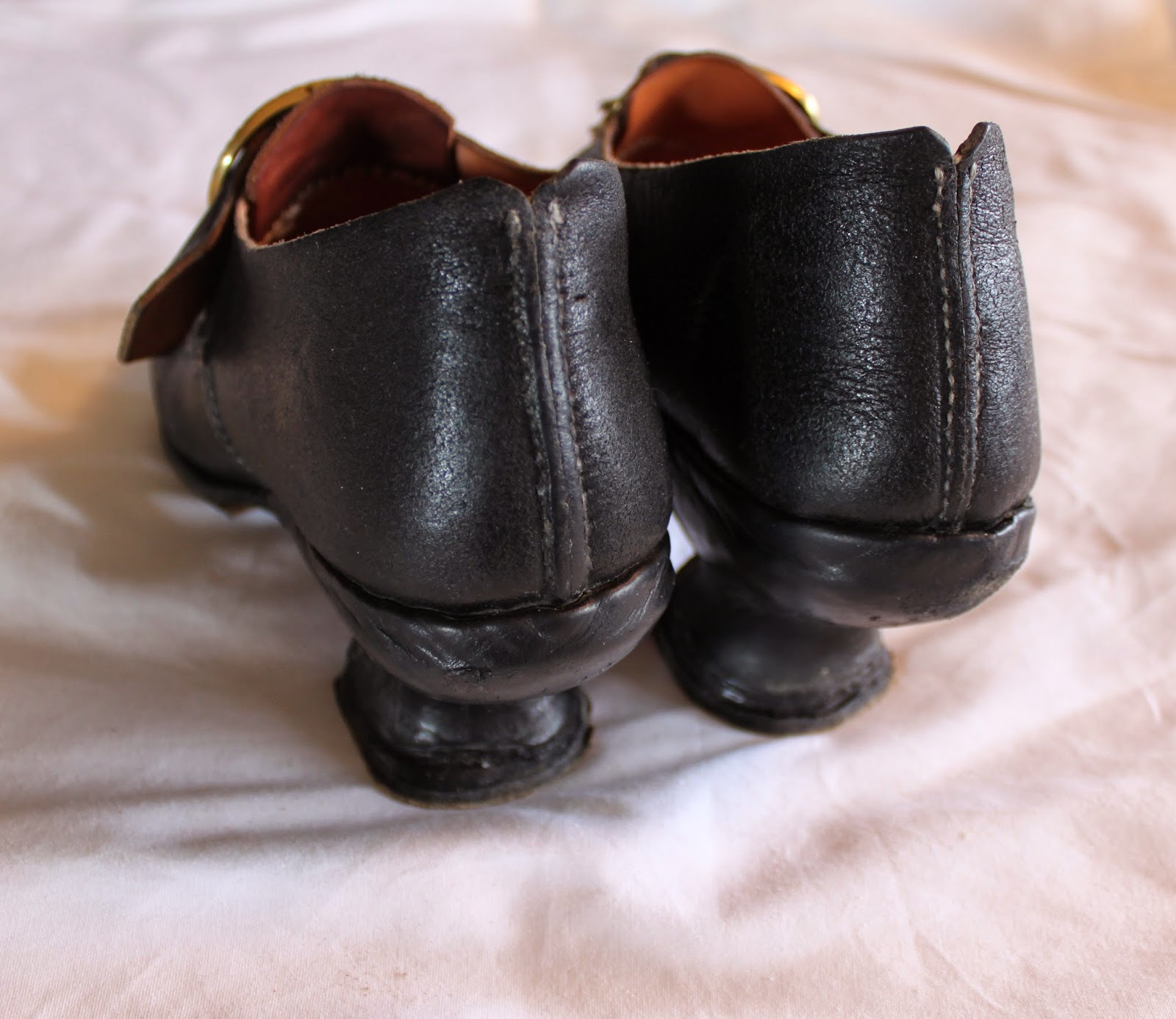 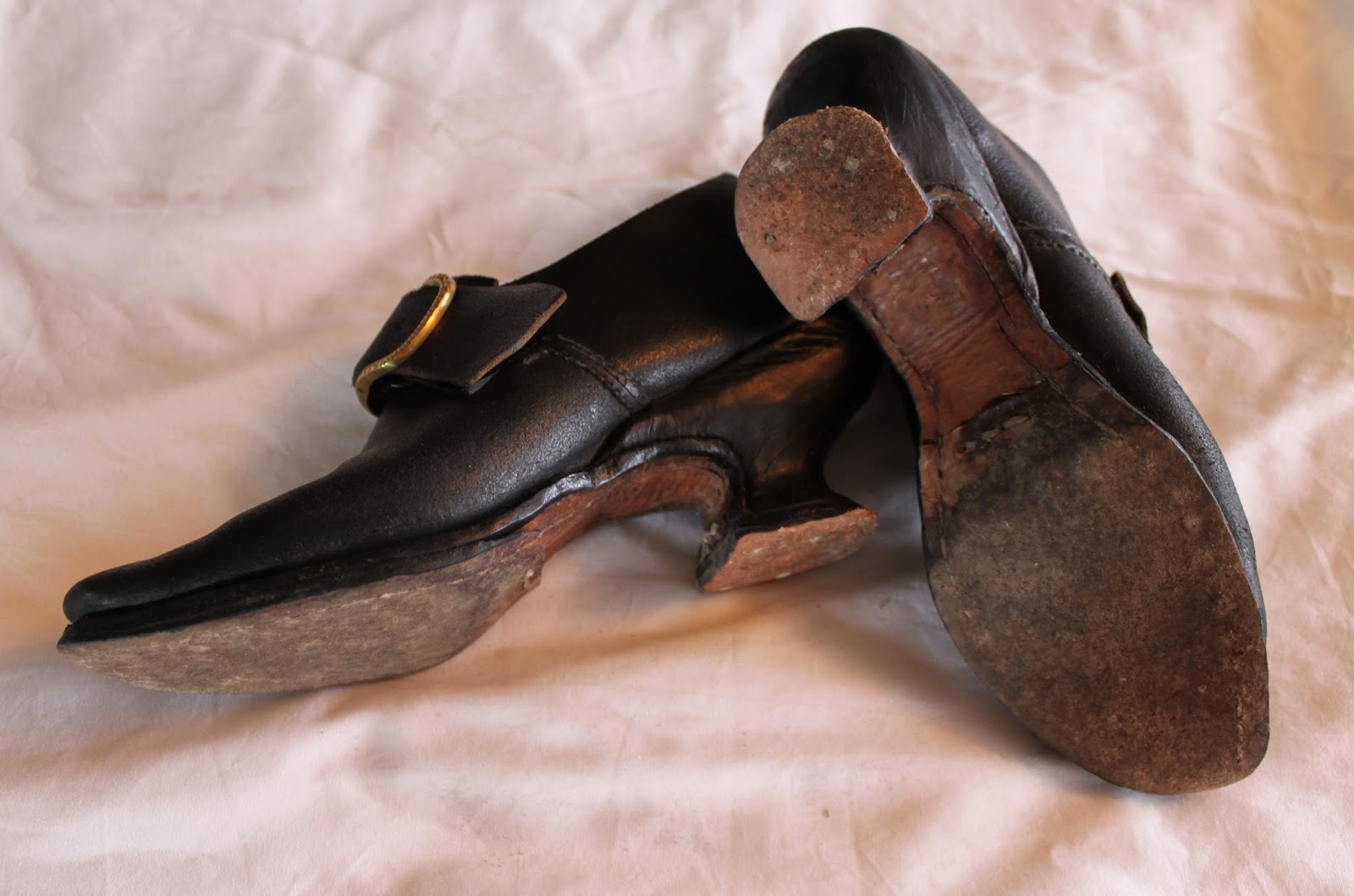 The most recent pair has seen it's share of walking around as well. You can see some pre-emptive heel caps on them. The sole is simply sueded at this point, no major wear. I'm only wearing them a couple times a month now, so they'll last a few years at this rate. 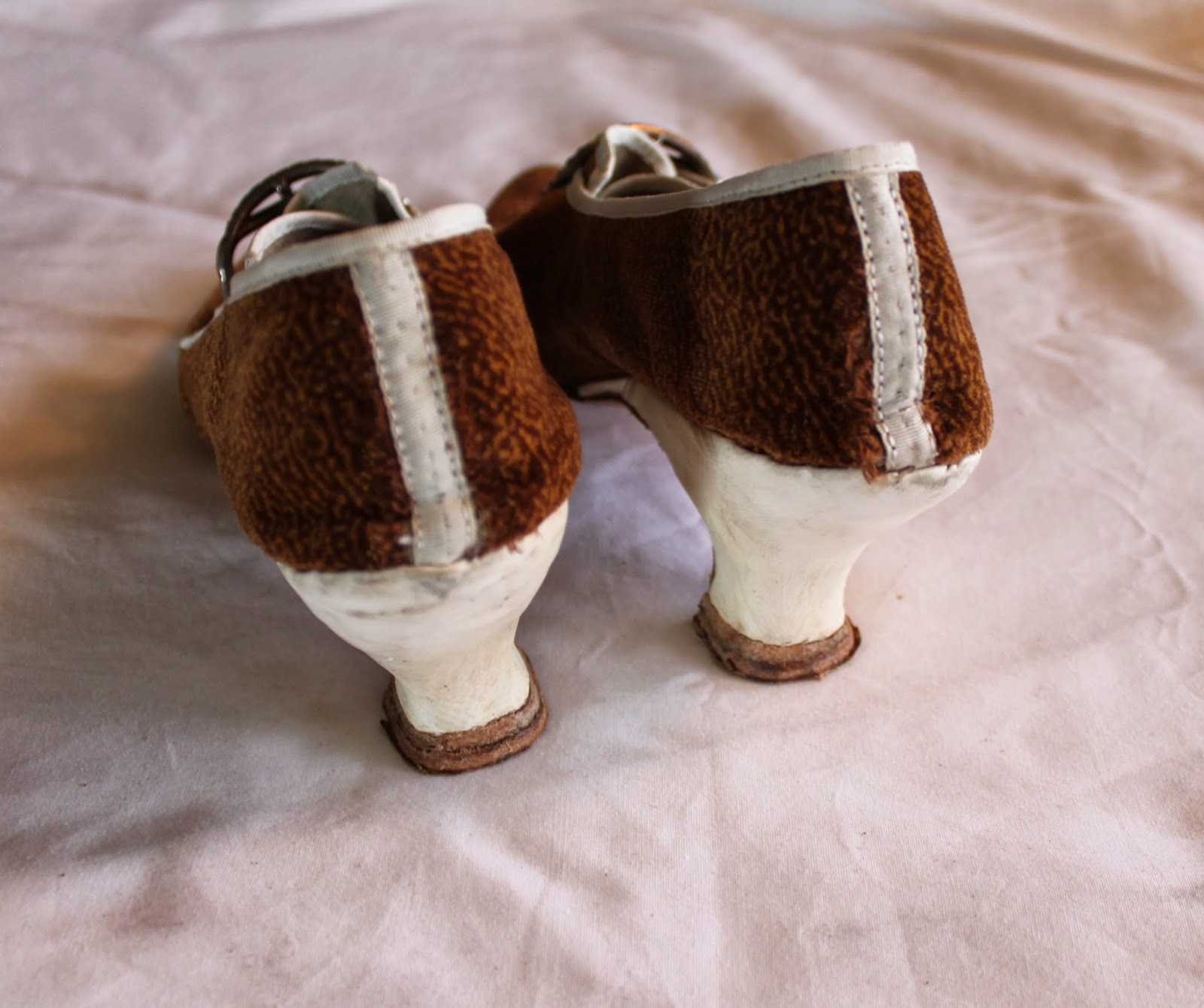 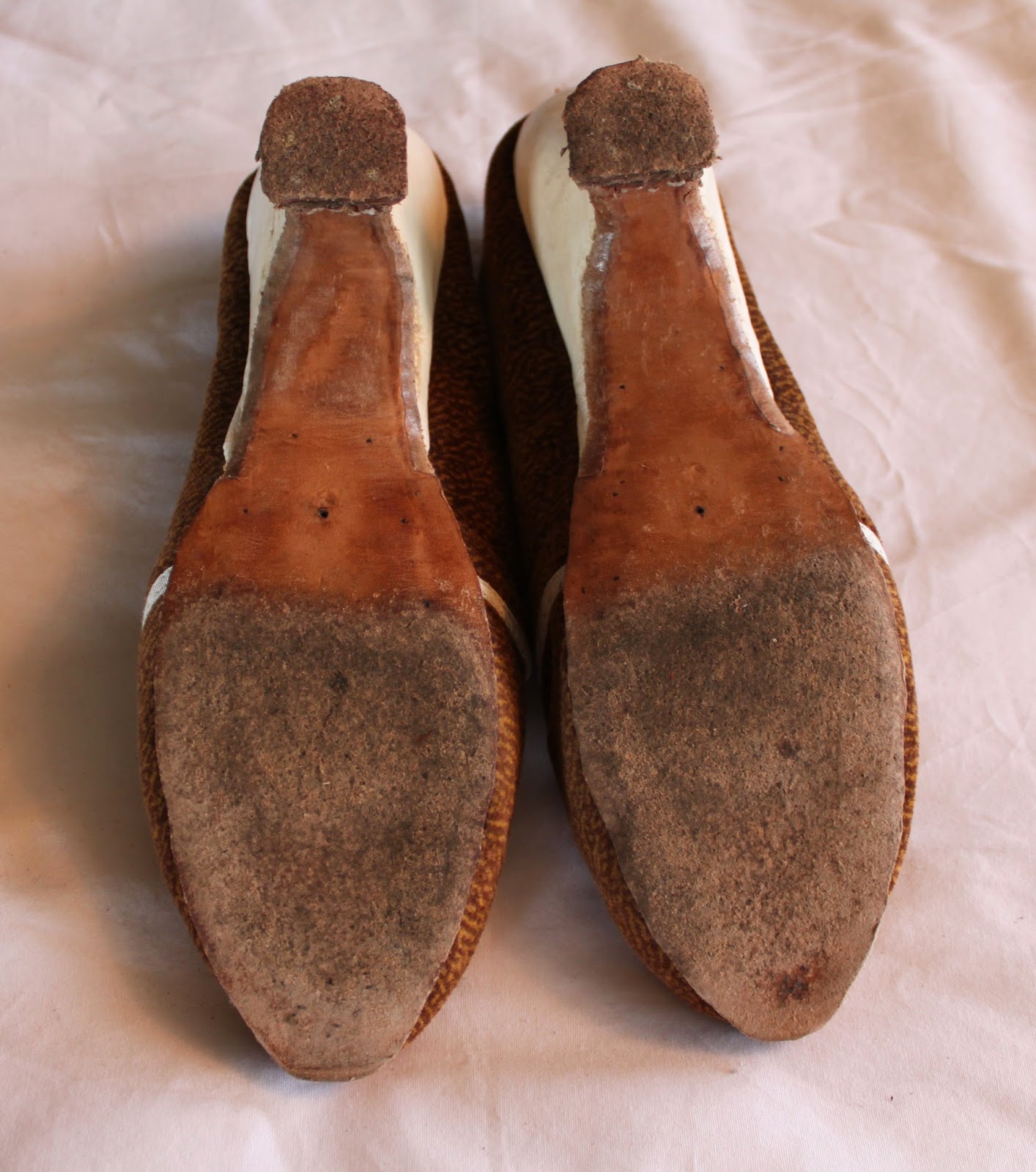 The last pair is a sort of control. The slippers have only been worn indoors (save one short trip that answered why you don't wear slippers outside). Though, that does still mean about 150 days of wearing for about 8 hours on pine floors. I'd wear them everyday if they dealt with carpet better. I haven't even sueded the soles completely and the ribbon wear is because it's antique silk ribbon, pretty but fragile. 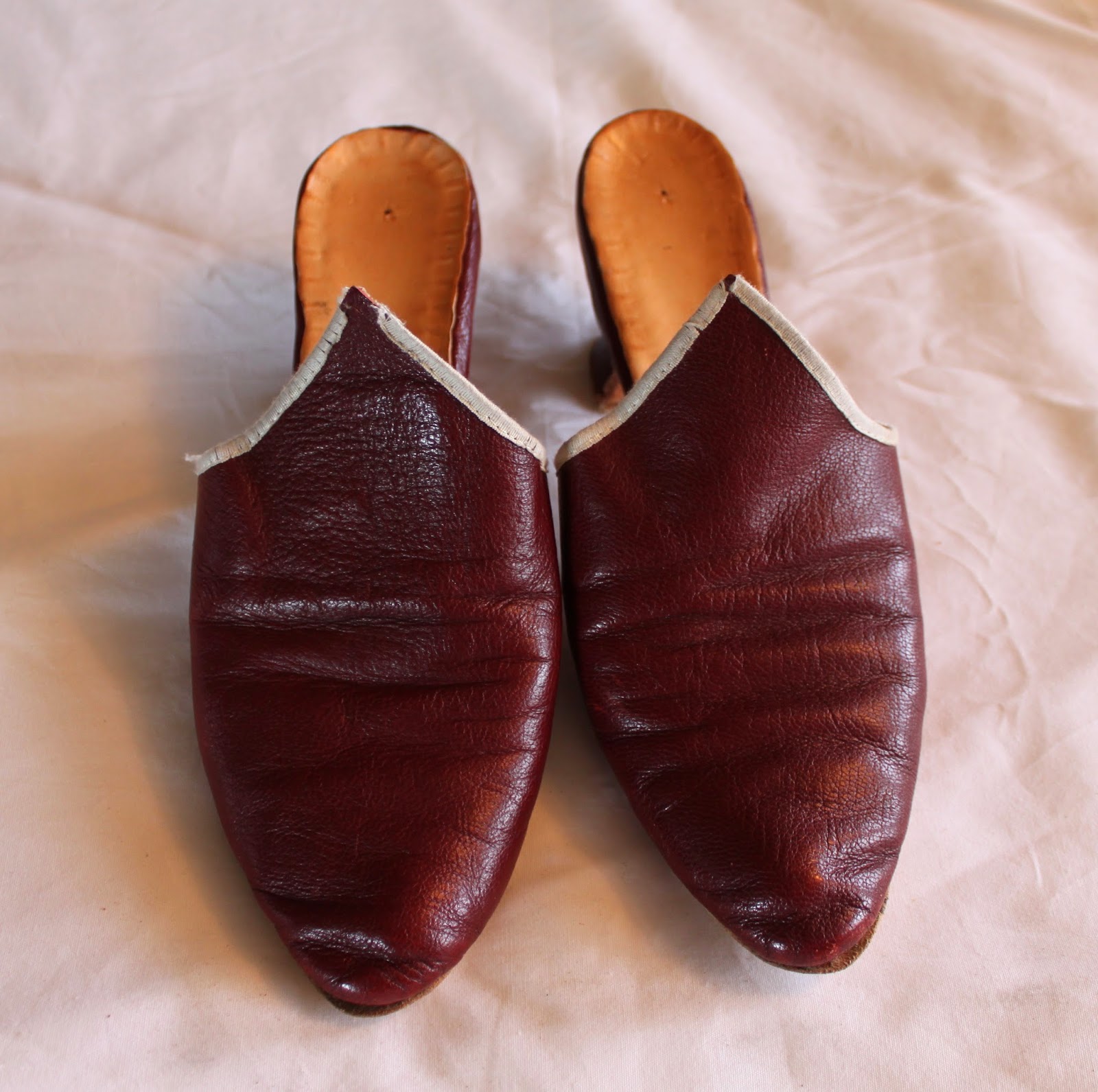 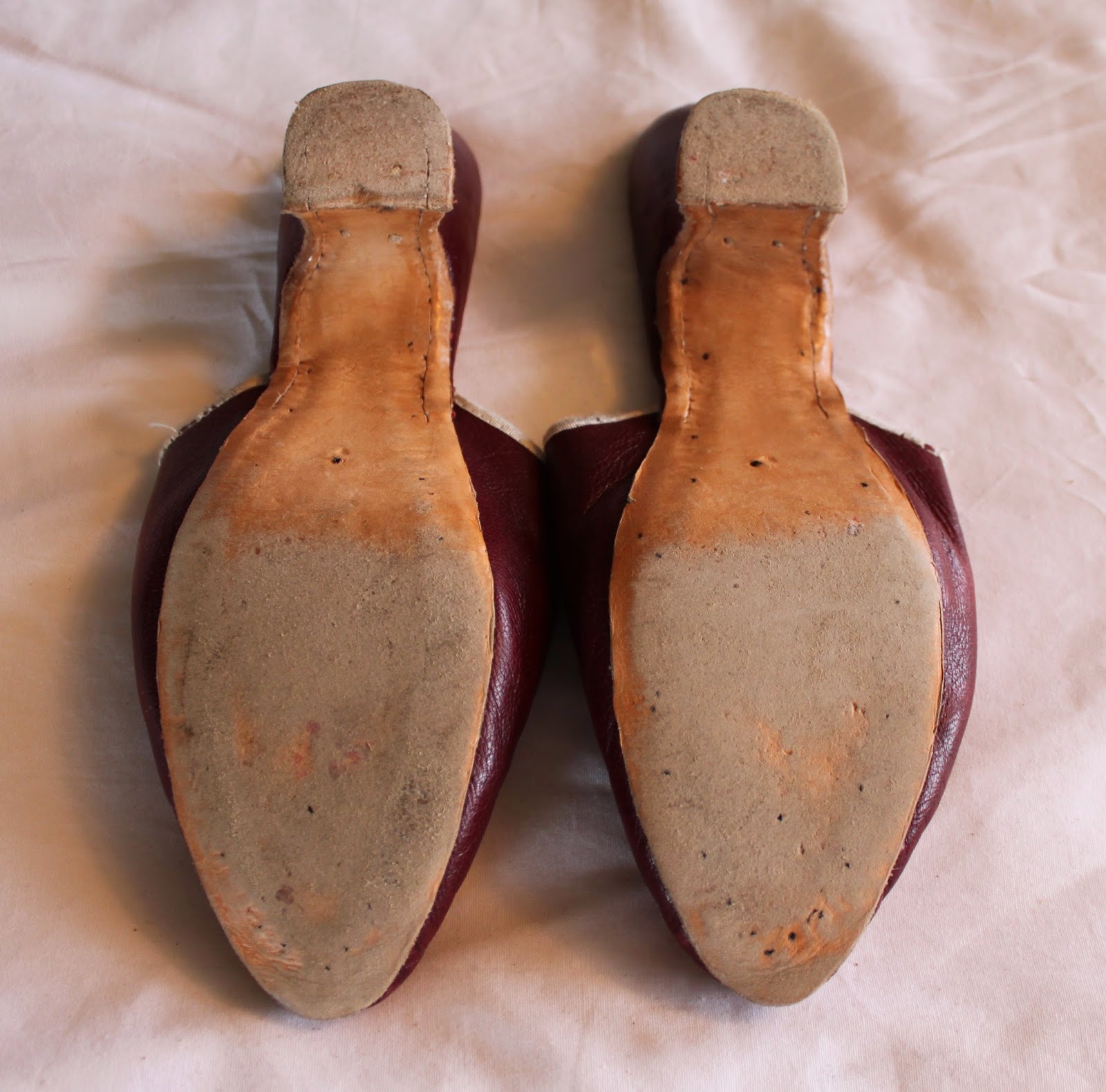 Also, the Shoe Timeline print and digital file are up on the Etsy site now, along with a few markdowns:  https://www.etsy.com/shop/GoldenHind 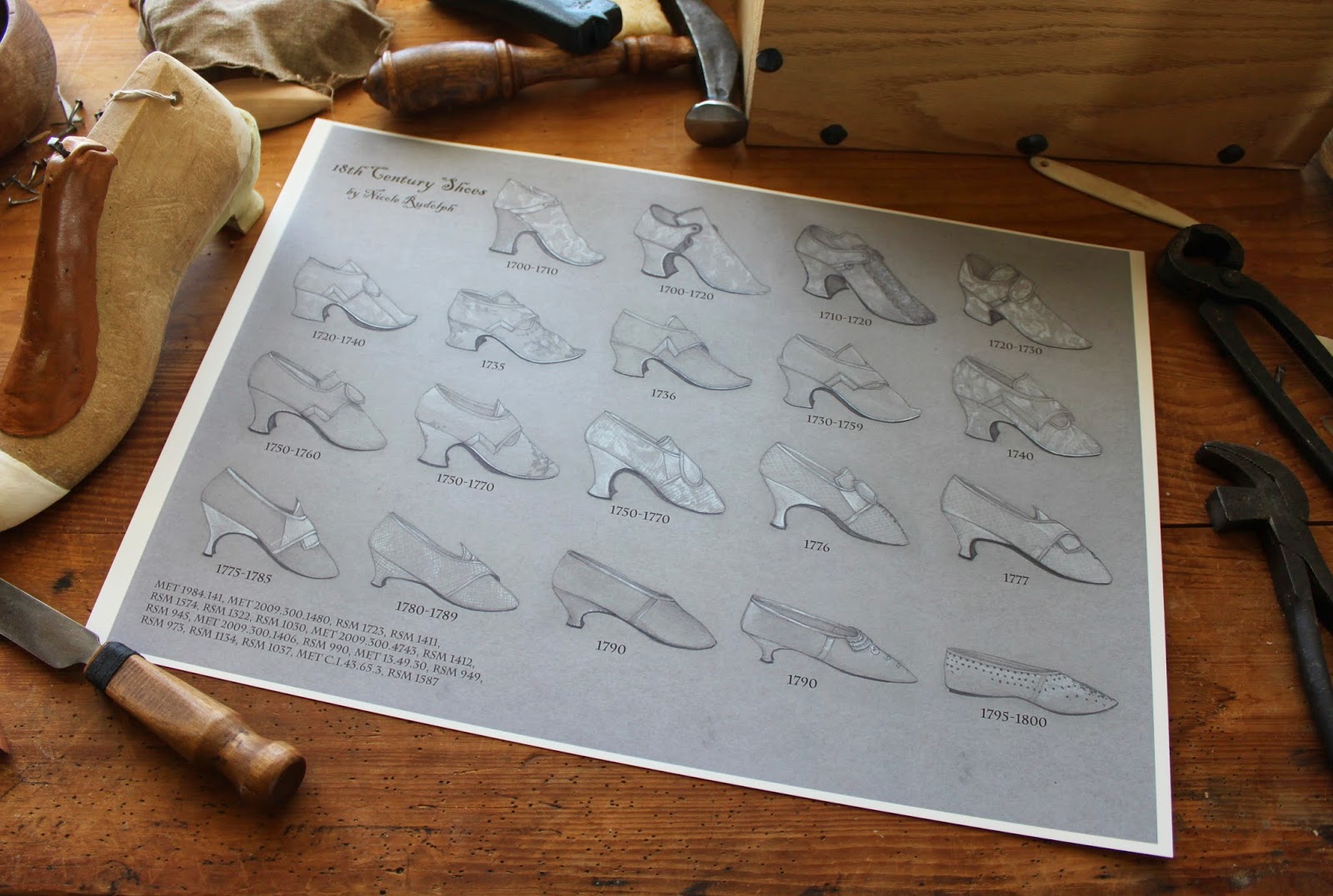 I love the red satin pair! They're so striking.

You provide some good insight into why people had to buy shoes so often in the 18th century.... although, I tend to break shoes quickly now too, so if I wore the same modern shoes for seven months straight it would probably be time to replace them too :)

I too love the red, they're so luminous. Really interesting to see the wear on the shoes and get a glimpse into how quickly they wore out "back then" thanks for the post!

Very interesting post. I'm curious if wearing pattens would save the shoe any wear while outside. I know they are sort of the period equivalent of a galosh today but it might give the shoes another couple of weeks.

I think the idea of this book is great, as there isn't one like it out there. I am definitely interested in learning about 18th Century shoemaking. I purchased your pdf and I like that there are lots of photos. I think if you format it like this in the in-depth book it would be great. Something I would like in addition to clear instructions, would be where to purchase the items needed for shoemaking. Thanks for a great book, and I look forward to buying your next one!

Oops, I just noticed that I commented on the wrong post! This is obviously meant for your post on the book you wrote...