I had an idea during this past weekends events (which I'll talk about shortly).  I found that people were extremely curious about shoemaking.  It's not something on which there's a lot of information floating about.  There were many misconceptions and questions.  It helped me to push what I know by trying to teach it to others and finding out what areas my knowledge lacked in.  So, what I would really love is for you to post any and all shoe-related questions here or on my facebook.  It doesn't have to be 18th century.  Technical, style, history, anything is up for an option.  Don't worry about sounding silly- I'll leave the Anonymous option open for comments and remember that I guarantee I got worse questions this weekend (No, the giant 1" nails don't stay in bottom of the shoe....).

This past weekend I worked as an artisan at OpSail in Norfolk.  The event was meant to be 1812 themed, because of the anniversary.  I brought a huge amount of millinery items on Friday from the time, but I had a number of people curious about my progress in shoe-making.  I had originally intended on bringing that instead, but the plans to order Regency shaped lasts were postponed.  Regardless, I gave in and brought shoe work on Saturday and Sunday.  Gwendolyn also attended showing miniatures and portraiture.  Samantha also joined us on Sunday.  Yes, that is a new dress I'm wearing.  No, I didn't get pictures of it (whoops). 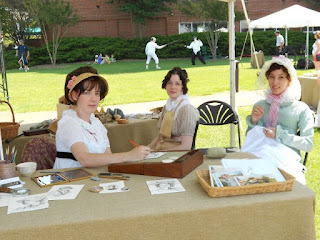 I cheated a bit an worked mostly on my Louis XV shoes.  Wrong style and wrong construction method, but it seemed to be the technical aspects that were most interesting to people.  I made the second upper, skived down the second sole, and started stitching the first sole on. 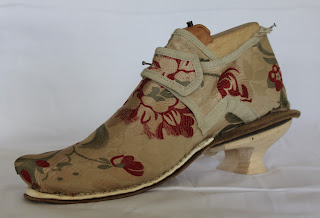 The sole is now stitched on to the rand, but I need to take a hammer to the edges to make them look less messy.  This is also only a stand-in heel- I have to make mine from scratch since they're larger (off to find some beech wood later!). 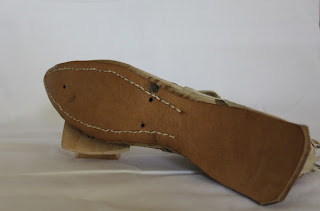 Don't look to close at my horrible stitching.  Hopefully the right shoe will be better!  This technique is a very different movement of the awl than I'm accustomed to. 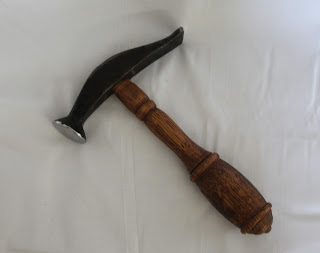 Brand-new (to me) french-pattern hammer Mr. Walker gave me!  The top is 18th century while the handle is a reproduction.  I think I love tools as much as my husband does now.... 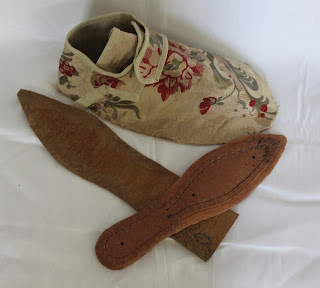 These are the pieces for the second shoe- upper lined in linen and bound with silk, insole with holdfast already in, and the out sole skived down so the edges are thin while the middle is still a good 1/4".

Right or wrong shoe, stitching challenges or not, honey, I commend you for taking up the challenge and figuring it out! Cheers to you and good luck. Keep us posted.

Wow, great job! Those shoes look amazing! I'm sure this is what everyone asks, but were there a lot of female shoemakers in the 18th century? Thanks!
-Julia

Wow, what a dream come true! I've been studying your shoe posts, as well as every other shoe source possible, for ages now. Thank you, thank you.

Indeed, I do have questions, and they mostly concern heels.

How do you design the wooden heels? How do you get the design onto the wood? How do you cut them out: what tools do you use and is it possible to use just hand tools? Is it hard to get two heels to be the same size and shape?

What kinds of leather do you use for outer soles and for inner soles? Are they the same kinds then as now?

Your shoes are coming along beautifully! Can't wait to see them finished.
-Emily

Amazing! It honestly would be nice to have more options of cloth shoes than constantly wearing the leather shoes. Fugawee once made cloth shoes. Don't know if they still do. Another person offers silk dyeable shoes. But... that's about it! Considering, you see quite a bit of cloth shoes in the museums!
So... the cloth shoes... what makes them seem so stiff? What keeps them from ripping when walking or falling apart? Cloth shoes seem so fragile in some pictures from Museums collections. What does it take to achieve that sort of proper period look without breaking the bank? Seriously, $300 for a pair of period shoes... it's better be made by Prada!
~Lady B