With another workshop held at my house this weekend, I've gotten a good start on my second pair of shoes.  I already had the outer soles ready and one of the uppers finished. 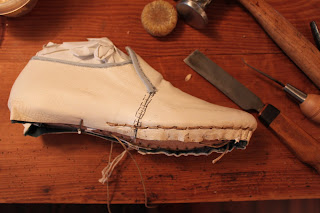 I covered the last and outer sole with paper, then lasted and tacked on the upper. We added in re-inforcement pieces to the toe area, unlike last time.  You can see the small marks of the stitches.  It's inserted between the leather and fabric, but only stitched to the leather.  All of that took most of day one. 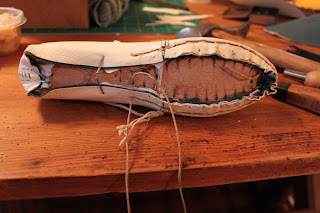 A combination of a better sole leather, larger awl blade, smaller awl haft, and using 7-strand thread instead of 9 made this seaming go much faster and look much better than my first pair.  I still need to work on strengthening my grip in my left hand.  I think this inseaming took about 2 hours (someday, maybe it'll be 30 minutes; that would be glorious). 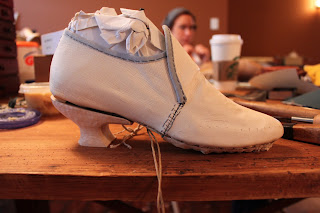 I also started carving down the heel to be the proper shape.  It's lost some length since this point. 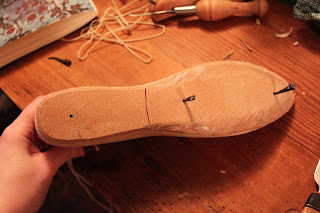 With the stitching done, we removed the last from the uppers and started carving out the insole.  I still need to put a hold-fast in the heel area. 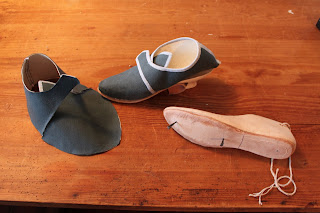 The upper was turned (not easy!), then I skived down the remaining flap of the outer sole so it would curve into the heel nicely.  I still need to finish binding the second upper before I can start on that shoe (it's such a pretty blue wool).  I have today off to recover then it's back to work on it tomorrow.  I'm hoping to have this pair done by mid-February.
Posted by ColeV at 10:01 AM

I've been thinking about making toe area re-inforcement pieces for my next pair too. I've just been unsure is it a period thing. But I guess now that it is. I'd be happy to hear how much difference you think they make when you get to wear your new pair.

Those look great! They look similar to the pair I started making at Brett's NY workshop this past summer. Mine are blue wool with black trim. I wasn't able to make it to the work session last weekend but hope to find a time to work with Brett again this summer. Virginia is a long drive from Vermont!
-Emily