With the Accessories Conference looming a short distance away, I keep reading blogs from ladies who are building quite a trousseau to bring with them!  Unfortunately I don't have the time to build a new gown, nor do I really need to with the number of things I have.  So, what better way to prepare for that conference than to build a bunch of accessories?  The Robe a la Polonaise I recently finished seems to show just about anything you can imagine with it in its fashion plates, so that seems like the best outfit to revolve around.  My new Brunswick jacket already has a fur muff and there's not much to do other than that.  I don't know how many items I'll finish by March 12th, but I will certainly keep posting them here as I go along.  First on the list is a GIANT fluffy hat.

I wanted something akin to these.  I have plenty of taffeta, silk gauze, ostrich feathers, and even paper flowers. 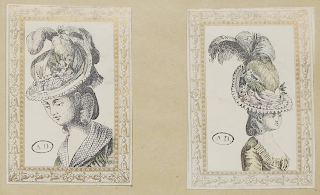 Making an aqua and yellow hat seemed way too matchy-matchy, so I started with just the yellow silk from the trim.  I decided to do a pouf in the middle, silk covered in gauze.  The gauze strips will gather around the edge and the silk donut will cover their inside edge. 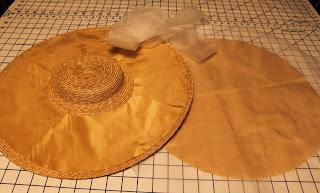 I first gathered and stitched down the ruffle.  I'm trying to hold the back up with a few tacks so it can bend overnight. 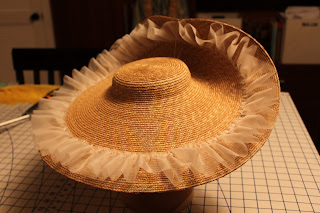 Next I stitched down the silk donut.  You can see how the backside is already prone to curve a bit.  I used a spaced back-stitch, but kind of wish I had slip-stitched it instead, even if that would be more difficult.  I also ironed the gauze down a bit. 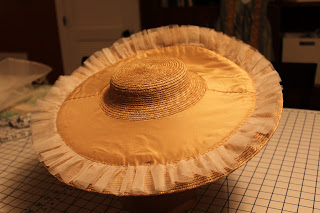 Then gauzy pouf!  I left the gauze 2" larger around than the silk for a second ruffle and gathered both pieces together. 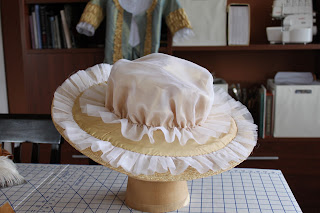 I found another taffeta in my stash that was a slightly pinker yellow, bordering on rose.  I took a 10" strip and ironed the edges over.  I did quick pleats at the flowers and the back to gather it down. 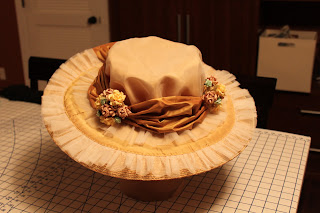 The rest of the silk length I played around with for a bit, trying bows and fans, but finally settling on pulling it over the edge into the crown. 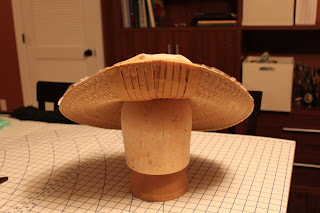 Next I played around with the flowers a bit more, tacking them down, and organized the feathers.  I have so many colors of each that it really was a bit of a challenge as to what to use.  In the first picture you can see the Polonaise it's meant to go with.  In the second, I've curved the feathers a bit more so they don't stick up so high and tacked the brim to the crown in back so it stays curved up. 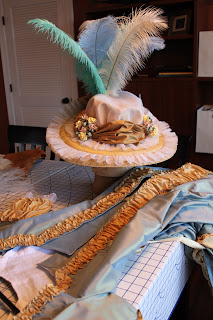 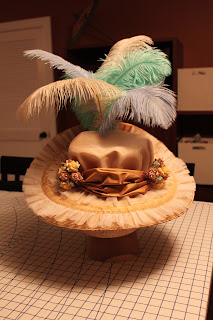 Quick mirror pictures.  I need a bigger wig, mostly in width.  Certainly seems like an appropriate Spring outfit though!  I also need to tack the flowers and feathers more, especially in case of a windy day. 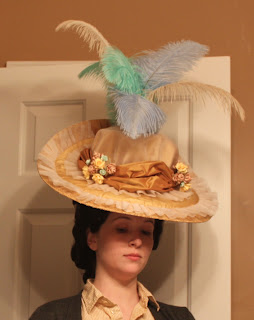 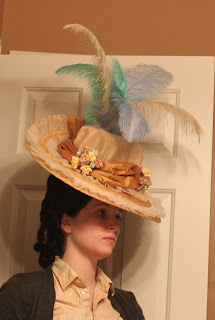 Today I'm working on recovering an antique parasol, if only I could get the MFA website to co-operate!!
Posted by ColeV at 11:48 AM

Ooooo, this is just lovely! I love the color combinations with the gown. Can't wait to see it in person in March!

How did you make the center part stay poofed up so nicely? Did you stuff it with anything, or is the gauze organdy-stiff enough to hold the shape?

The taffeta and the gauze are both so stiff it really doesn't need anything. I thought about stuffing it for a very permanent shape, but the weight would have added up quickly.

Thank you for responding! I always wondered how they achieved that fabulous poof in all of the fashion plates! Now if only I had an outfit to justify a hat like that...:-)

Love the way you draped the fabric around the pouf. And love the colours. I can feel a hat coming on now - especially since I've just received a really big wig. My first one was more like the one you're wearing in the photos.
And Rebecca - make the hat and the outfit will come!

Hi again! This is a *very* misplaced comment, and you're of course most free to delete it; I just didn't know any other way to ask this (very random!) question. In all of your vast 18th century research and costuming experience, have you ever encountered a glazed cotton gown? I'm thinking specifically of single-color dyed cotton, not printed like chintz. I've found a reference to dyed glazed cotton used to line a gown (and a callash), and I've seen plenty of glazed worsted gown fabrics, but nothing to confirm a plain glazed cotton as dress fabric (at least in the 18th century - there are plenty by the mid-19th). The long and short of it is that I have a peachy-pink glazed cotton to use, and I was hoping your expertise could shed some light on its 18th century accuracy (or lack thereof!). :-)

Rebecca-
I know plain glazed cotton was used for many things at this point, but I can't say I've ever seen reference to it being used as a gown. I've read of linings, calashes, and quilted petticoats. Now, the printed chintzes are essentially the same except with a pattern, so there is some feasibility to it. Sorry that I really can't help you definitively say yes or no, I personally have not seen it, but there's a lot I haven't seen yet! Perhaps this would be a good question to ask the CW Milliners on their facebook page (Margaret Hunter Shop).

Thank you so much for taking the time to respond, Nicole. That was my thought - chintz is essentially the same thing, except printed. I'll definitely try asking the CW milliners; if anyone would know, they would! Thanks again!