This is going to be a very brief idea of what a Robe a la Polonaise is.  There's not a mass amount of reference material easily found on this type of gown and I'm certainly not going to make anything up.  However, and this is the fun part, Brooke Welborne and Kendra Van Cleave have done a lot of research on it for the last few years and should be coming out with a very in-depth article soon (squee!).
So, what I want to do here is show some fashion plates, and a couple extants, and talk about the many options you can see here.  As I mentioned previously, this gown was very popular in the 1770s and 80s. It can be full length, short jacket, or in-between.  Even though the gowns were polonaised in back, the short jackets weren't.  But, the separate and loose front still defined them both. 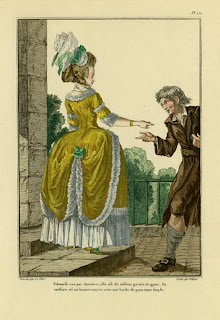 This is a solid silk taffeta robe trimmed with silk gauze.  As you'll see in many of the fashion plates, gauze is VERY popular.  The trimming continues all around the hem of the gown, with a deep ruffle on the petticoat.  Notice the placements of the bows is very far down compared to some of the following images. 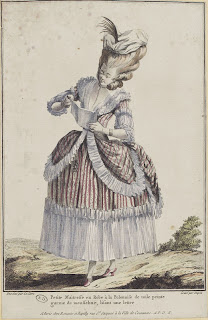 Stripes were certainly common as well.  Notice how her polonaising is very uneven, with the fronts being much higher than the back.  She still uses gauze trim, which one the sleeves continues all the way up to the armscye! 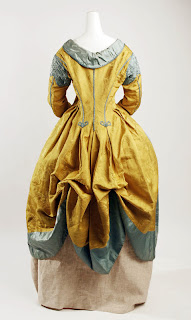 This is one of the publicly findable extants, from the Met Museum.  It's just about the reverse of my color scheme.  The trimming is very simple, just applied.  The neckline has a collar instead of a typical open gown neck.  Most of the seams have cording sewn on.  The trimming on the long sleeves is at the top rather than elbow or bottom, it seems to be a hap-hazard puckering.  I'm assuming they have the skirt pulled up completely, and it seems to be fairly low compared to some other images.  I do love the applied "bows" at the ends of the seams. 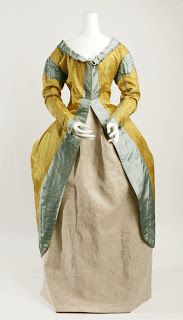 There appears to be a tie in front, possibly to hold it together.  They've pinned the front closed further down, which gives it a very awkward puckering.  I'm assuming the bodice is missing on this extant.  It does clearly show the obvious widening of the trim as it continues down.  The full length sleeves are often found in the 1780s, rather than early on. 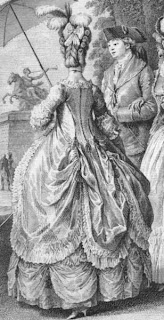 This fashion plate also has the cording along the seam lines, although her gown is again trimmed in gauze.  Yet another trimming option of flouncing on the petticoat.  The skirt in this case is pulled up by use of ribbon or cording, just barely visible.  Her sleeves also appear to have the random puckering.  And one must apparently have an equally grand wig to go with their gown, as all of the fashion plates show! 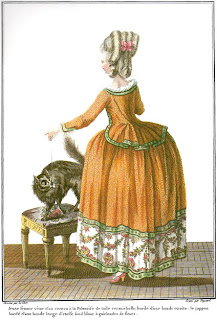 This is a perfect example of a short jacket.  Long sleeves were common on this style, which was more popular in the 1780s.  It also shows off a fabric option of "toile", what looks to be a cotton print at that.  The border trim would also be a really interesting challenge if you aren't the ruffly type. 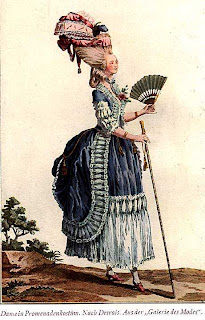 The overall design isn't much different from the prints before.  The petticoat has a very deep flounce and the gauze trim on her gown appears to be stuffed.  She also has a few tassels hanging in front and back. 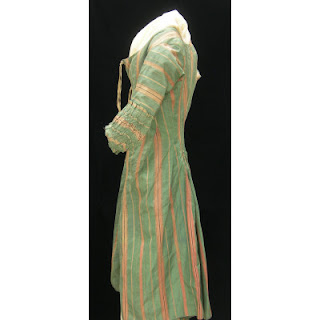 This is one of my favorite examples.  It's in the Colonial Williamsburg Collection.  They made a recent study of it, reproducing it three times over; once as a copy with all the defects, again by hand but adjusted to a pattern, and finally in a different size to be used by an interpreter.  It's an unusual piece with some strange stitching, but it goes to show there's no singular right way.  It's shorter than most of the gowns in the prints, the skirt is pulled up with a strip of fabric which hooks to the back.  The cuffs are made separately with very erratic tacking then stitched onto the sleeve.  There are also ties in front, but the bodice is missing and appears to have been a separate piece. 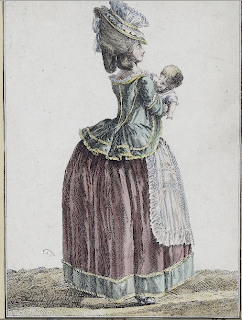 This is my favorite print for some reason.  It's a very simply trimmed jacket and the only time I've seen a contrasting petticoat.  All of the seams appear to be corded.  Make this out of a cotton dimity or cherry-derry and this would be an immensely practical summer garment. 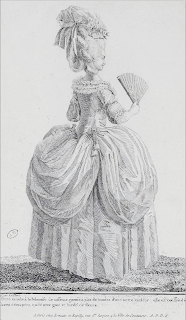 This example is a bit unusual.  It appears to have no trim, but if you look very closely and read the description, there is a border on the petticoat and possibly on the gown of a different colored taffeta.  The back also appears to be separate from the skirt and there is an immense amount of fabric pulled up!  I can't tell if the neck ruffles are built in, but I don't see evidence of a kerchief. 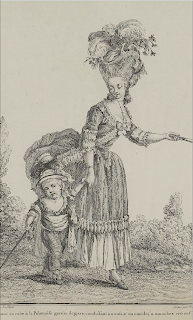 This is the image I used for my trimming.  She also appears to have a ruffle around the bottom of her bodice, but I left that off.  You can clearly see a narrow gauze ruffle around the neckline on her gown as well. 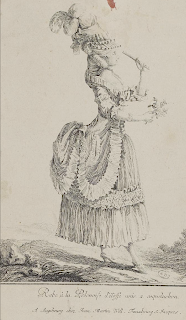 She has a very interesting, almost wavy edged trim around her gown.  And the flounce is topped with an erratic puckering.  There is also a small line of trimming around a pocket slit.  I don't have a slit in mine, and the images often don't show one, but it is apparently an option.  She also appears to be wearing a bum roll rather than side hoops. 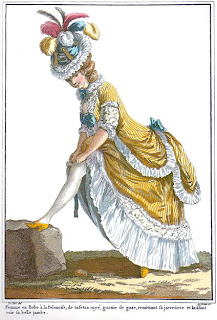 This again show the uneven polonaising, as well as a plethora of bows. 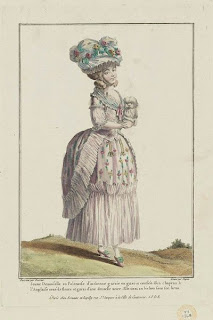 This print labels her fabric as l'Indienne, another type of cotton chintz, again with gauze trim.  The line of gathering on the trim is far off center, comparison to most of the others which use one or two lines equally spaced.  Her bodice also appears more waistcoat-like, though it doesn't distinctly show buttons. 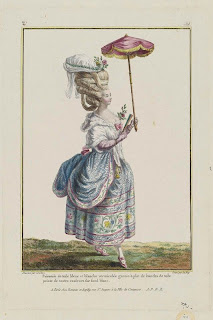 This gown appears to made of a similar toile to the orange jacket above.  It shows just about every matching accessory one could imagine, sans a walking stick or puppy, but she is out of hands.  Perhaps a few ideas to attempt accomplishment before the upcoming Accessories Symposium in March? 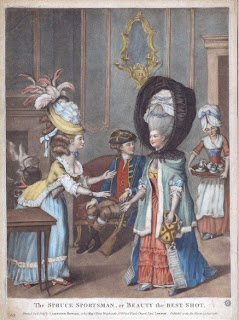 And finally "The Spruce Sportsman, or Beauty the Best Shot".  This lovely jacket is not only shown with a contrasting petticoat, but a different color bodice as well.  The Margaret Hunter Millinery Shop at Colonial Williamsburg recently did a living version of this work.  You can find the making of it on their Facebook page.
Posted by ColeV at 12:56 PM

Thank you for the information! I can't wait to read Brooke & Kendra's article.

Were these only made out of silk or cotton (vs wool or linen)?

I've only seen silk and cotton, but that really doesn't mean much. Whatever fabric is used has to have the right weight and hand to it in order to drape correctly. A loose weave or a heavy weight wouldn't work. This gown was a fashionable style, so most often the people wearing them would want fashionable fabric as well. Silks and cotton prints were top of that list, so you're going to see them more often. But, never say never!

Hi! I'm going to sew my own Polonaise and your pictures really help and inspire me! thank you!