In the late 19th and early 20th centuries there was a revival of 18th century styles. Shoes were certainly not exempt from this. There are dozens of pairs out there clearly based in those earlier fashions. Some was just due to the mode of the time, others were created during a time when shoemakers were desperately trying to prove how much finer hand-work was than machines. They not only harkened back to the detail stitching, but the shape and style as well. While it's all wonderfully fascinating, it seems to have created a problem. I've seen many examples on auction sites and even in museums labelled as "18th century", while they're clearly of a much later origin. And sometimes, they sadly get sold for high prices to unknowing bidders.
So, here's a celebration of the distinct Colonial revival shoes as well as a description of how to tell the difference from the originals!

I chose the two pairs above as good examples since they have such close original sister shoes.
What you can't see in these images is the easiest way to spot a revival shoe (or a misdated one). Right/left lasting. Yes, straight shoes become right/left, but their soles will never look anything but symmetrical. If it's right/left, it's probably after 1860.
The slight toe spring seen in late 19th century shoes is also a good give away. Originals tend to have a straighter line going from the back of the heel to the toe and don't lift very far from the ground in front.

Sometimes it's matching up the fabric to the style. By the time buckles and straps fall from fashion, so does brocade fabric.

Outside of the obvious buttoned strap, the tongue shape and embellishment is a good clue.

Modern brocade fabric, seaming, lack of straps, and a very shallow heel (under the arch). 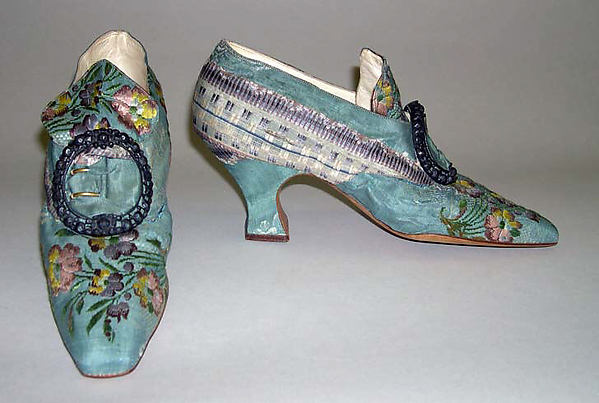 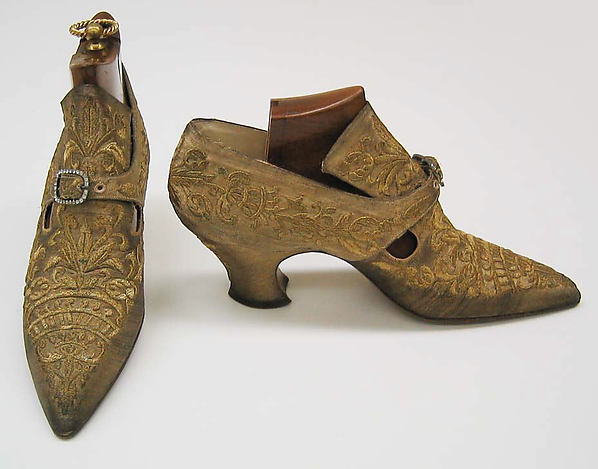 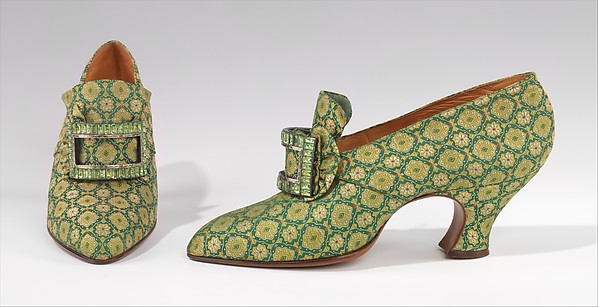 Mens shoes, particularly red heeled "court shoes", are seemingly more subject to misdating than anything else I've seen.  You can't look to the fabric for clues, being always out of black leather. However, some of the previous notes will help. Right/left lasting is still valid. Oversized tongues and other artistic exaggerations (like these straps) are a huge giveaway. Those massive tongues are not accurate to the 17th or 18th centuries. They were large, but not that big!
And while this square toe shape is "period accurate", many court shoes from the 19th century have wider and less tall square toes with rounded corners.
MACHINE STITCHING. It wasn't invented until 1846 for regular sewing.
If you can see the bottom of the soles, look for the attachment method. Pegging on the sole is done later, while stitching (often hidden in a cut channel) is earlier. Some of the exhibition shoes are stitched, however. Metal tacks on the heels or glued on soles are much the same.

Stitched sole and pegged heel construction when you look underneath. Dog-legged seams and randed construction. Even the insect holes in the leather covered heel (apparently these moths are only found on Continental Europe and their larvae eat into the wood and leather). This is one of the only pairs of court shoes I feel confident pointing to the online images and saying 18th century. Many of the others have...issues...I'd like to address in person. The only pair I've handled so far ended up having a 19th century label and bottle green leather insole. Dead give aways you often can't see online.

I love the heels, too bad not in style today

Fascinating to see the subtleties pointed out! And I suppose it's inappropriate to mention here how seldom I find makers I truly love, but how much I ADORE scrumptious, curvaceous, bold, colourful, unique Yantorny shoes... *sigh*