Next is a pair of common shoes worked off of images of an original pair at the Russian Shoe Museum.  There aren't very many examples of lower class womens shoes out there- they were, not surprisingly, worn to pieces.  These were the type of shoes given out by the church to the extremely poor.  There are some mentions of them being worn by "country people", but there are also mentions of silk being popular with both upper and lower class.  Almost all references to women's uppers mention wool, silk, or even tickens being a great detriment to the leather trade.  Looking at the original pair, it looks like the uppers might even have been originally for a man's shoe, just lasted to be a womans. 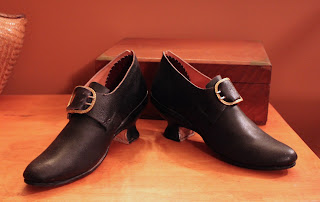 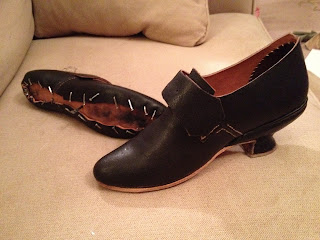 These are made up quite differently than anything I have made prior.  The uppers, being from calf skin, are thick enough that you work the seam stitching through their middle.  This way, there is a nice line of stitches on either side of the seam on the exterior, but nothing inside to rub.  There is also a heel stiffener whipped into the back, the stitches not coming through to the outside. 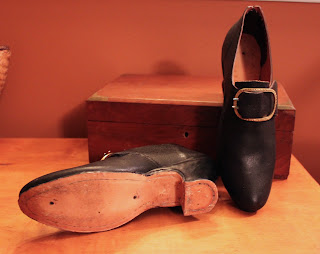 The actual construction technique is different as well.  The uppers are lasted over the insole and quickly whipped to it.  You do stitch the heel cover on as normal and paste in the heel.  Then, the outersole is heavily pasted on and a large awl is used to go all the way through the sole layers.  It's fast, but not easy to reach the bristles coming through in the toe area.  It unfortunately leaves an exposed line of stitches around the insole, which can be covered by a linen "sock" pasted in.  But...I don't have enough room yet. 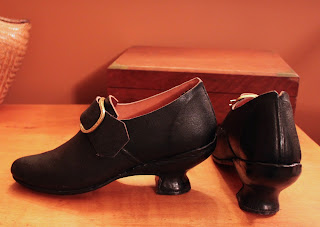 All of the edges, stitching, and the heels are blackened.  I made a few cheats on these, though you can't see them.  One of the straps on each shoe is a good deal shorter and the tongue is pieced.  All for economy when cutting out from a hide.

Do you think the wool ones were made of boiled wool, something like felting?

LOVE!!!! A friend in reenacting is supposed to be making shoes with these heels (far recessed in like yours). If he does, I hope to have me some!
Well done, you!
Mary
http://anhistoricallady.blogspot.com

great blog! check out mine, if you want :)
http://biancacataldi.blogspot.com/

I love these shoes!!
But I preferred the first design very stylish and pretty.
Thanks for sharing such beautiful piece of shoes pair!!