Here are answers to many of the questions I've been asked online and at events over the last few weeks.  I'd love to keep adding to it if any one has more questions!


Were there many female shoemakers?
Yes!  It was a trade that women were found in, not uncommonly.  There were even women who owned shops in the colonies.  I've been told making men's shoes is much more physically demanding, but so far with ladies shoes it's been very reasonable and that seems to be the type of shop you most often find women working in.  Making the uppers was very often done by women at home- requiring detail and fine sewing skills.

How long does it take to make a pair of shoes?
If I sat down and worked straight through I might manage a pair in about 30-40 hours.  Eventually I should get it down to half that.

Did the shoes come in sizes?
They did and the lasts did.  We know lasts were numbered, although not in a universal standard.  You could buy pre-made shoes in sizes as well, most often from England.  When starting a pair of shoes the measurements taken denote what size last.  You can add a little length and a lot of width (the instep leather allows for a big difference).  However, where the joint of the foot is compared to the length of the shoe is the most important thing that can't easily be changed.  I'm a #6 last with the range I use, but in length I should probably have a #7.  However, the joint is too far forward and the width is waaaay too big.  Easier to add a small piece to the toe of a #6.

How do I make the heels?
The heels I used on the 1770s shoes were turned by a craftsman.  However, they were all made to the same size (very big) and bought in bulk.  Very expensive since it required purchasing so many.  I had to carve them down from what might have fit a size 11.  The style I'm using for my Louis XV shoes requires me to carve them from a block of birch wood since they're larger in base than the bulk heels.  I'll be showing that entire process in a few days (blisters and all!).

What types of leather are/were used?
That's a huge question.  The simple answer is that what we use now is very poor quality compared to what they had.  Many of the tanning processes used have been lost- including how to make the leather used in men's riding boots which allowed them to be a second skin.  What I can give you are some of our common sources, which will give you a better idea of not only how much goes into a shoe, but how expensive it all is!
The sole leather I'm using right now comes from Rendenbach in Germany (great post about sole bends from Carreducker).
The whittaw and fancy leathers for the uppers can come from book binding suppliers like Talas.  Some of the odd pieces, like leather backing for heel covers, can be a variety.  Such as kangaroo leather from falconry providers.  Generally a pair of uppers takes close to 2 square feet.  A calf averages 10 sq. ft. and a goat 5.  Usually these hides cost between $30-40 a square foot.  For example, whittaw linings can cost over $70 per pair when it's all added up.
Dickens Brothers carries the waxed calf and kip for men's uppers.  Bakers has good leather for insoles or the outsoles of turn shoes.  Lately we've found AGS also has good light sole leather.
Keep in mind there are a lot of other sources, I just haven't tried them all yet!

Why do they cost so much?
Most modern reproduction shoes are priced in the $300-600 range.  It may seem absurd compared to the shoes we're used to buying, but it really isn't.  The fact is, there's a great deal of money in every shoe.  Not just in the consumed supplies, which are usually well over $100 per pair, but in the tools a shoemaker needs.  I've been fortunate to have a teacher who already has all of the necessary tools that I can borrow.  So far I've easily spent over $500 on my tools and I'm not even half-way there.  I don't even have a run of lasts, which is a few hundred in itself!  Spread out those costs, figure in the expensive supplies which can't be bought in bulk like large manufacturers can, and add up the time- it makes much more sense why it really is an investment.

How does cloth last?
The wools and silks on the exterior of shoes is always backed.  Some use whittaw or another fine leather, others use linen.  Very often, in both cases, there are some small leather pieces stitched and pasted between the layers for added strength.  The type I've used runs from the toe to the joint along the side.
I've worn my shoes a lot and I've worn them hard.  They're wool lined with whittaw.  I've walked over 80 miles while working- mostly on paved roads and gravel, gone through a big mud puddle, forged through "rivers" caused by heavy rain, and spent a weekend wandering through fields.  I'm just now going to add another piece of leather to the heel bottom and I'm starting to see a few stitches come through the sole (the sewing technique means walking through stitches won't even loosen the sole).  The uppers are a little dusty and fuzzy and I need to whiten the heel leather.  They've got at least another 50 miles in them before the sole wears down too much.  Hopefully enough time to make a replacement pair! 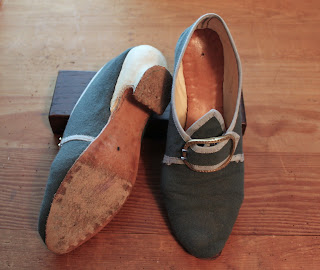 Well, I was thinking I should get into shoe making, and I think you may have just talked me out of it. I am amazed by what you do, but I already do too much, and have too much equipment and not enough time. I think I might rather pay $500 for someone to make me a pair! It's still fascinating to read about though.

Yes! Thank you for all the details and links. I am fascinated by reading your posts about shoe making, but I can't say it's a skill I feel the desire to learn myself. You certainly do have a leg up with access to the tools! As always, I look forward to seeing more.

What is the technique you mention for sewing the soles on where you don't even loosen the stitches when you walk on them? Where did you learn the technique for making the whole shoe actually?

Sewing B- It's called a shoemakers stitch (rather un-inventive). Aside from some whip stitching, it's what makes up almost all stitching in a shoe. Since it's two threads you literally make a knot inside the hole; combined with the sticky shoe wax and it makes it nearly impossible to have gaping.
I've learned the whole process from Brett Walker, a shoemaker at Colonial Williamsburg. And a process it has definitely been!