I decided to go ahead and sketch out some of the types of stays from the 18th century: 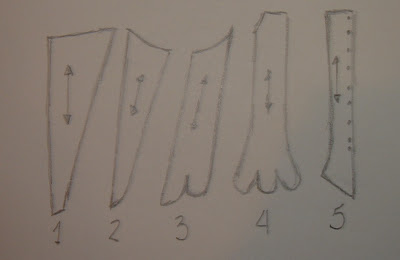 This is what I consider a very common layout style for stays.  I've seen patterns using anywhere from two to six pieces, but 4 or 5 seem the most common in the later half of the century.  The arrows show the direction of the boning.  If fully-boned you fill it all in, flaring apart to go into the tabs.  Piece 1 shows boning following the CF line, but later periods can angle all but the very center bone(s) to go in line with the other seam to give more bow to the front bust.  If making the stays lace in front, simply leave a small space between the first and second bones to add eyelets. 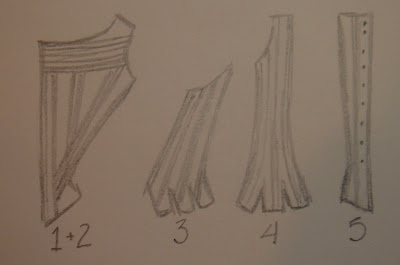 This shows an example of lines for half-boned stays.  It also shows how you combine pieces 1 & 2 for a four piece stay.  You can see how most pieces follow the same line as the fully boned above, but only the essentials are left in.  The front has horizontal bones to help with lift.  This are achieved with a extra piece of linen across the top front.  You can't do this with front-lacing stays since there's so much stress in the center. 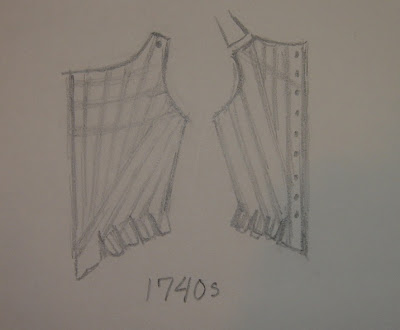 1740s half-boned stays that use only two pieces.  This would also require an extra linen layer for the horizontal bones, since they intersect and cross-over rather than butt up. 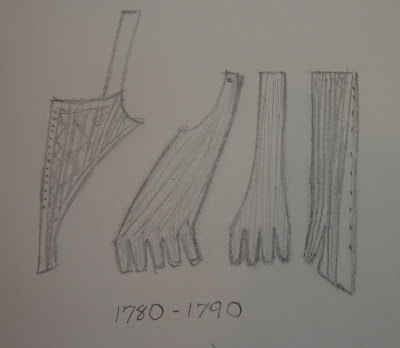 A later period style which is mostly boned.  The front has small spaces between some of the bones, while the other three are full.  You can also see how the front has a zig-zag pattern of bones which seems more decorative than functional, but probably does assist in the same manner as other horizontal bones do.  These are starting to look similar to the later corded corsets with decorative angles and curving of channels.  Also, the front is not technically a full lacing.  Where the eyelets stop the front pieces attach to each other. 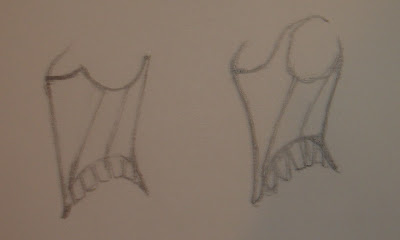 Here you can see the side-view difference between the flat fronted earlier style and the thrust of the 1780s and 1790s.  The waist also raises up in back slightly, but the last piece will still be long to keep from stressing your back (even if there are no tabs). 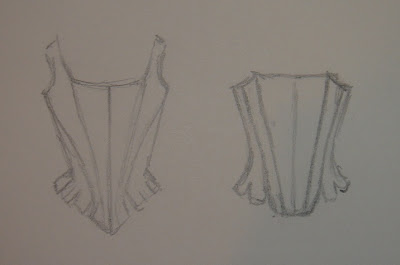 Two basic front views.  Straps or no, a narrow front tab or a wider/flatter style, a cut-in waist or a gentle/comfortable curve over the hips. 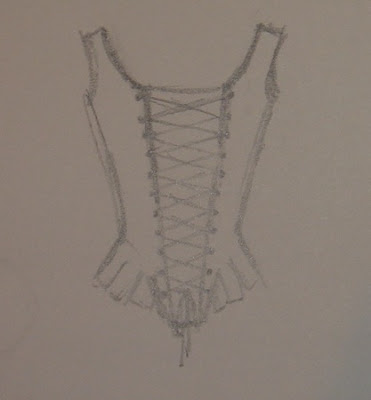 Showing how you can create a false stomacher style front and add lacing eyelets to the second piece (you leave the first 1/2" or so of piece 2 loose, so adjust for a wider piece 1).  You can also permanently stitch ribbon in the same pattern in that seam for the illusion of lacing. 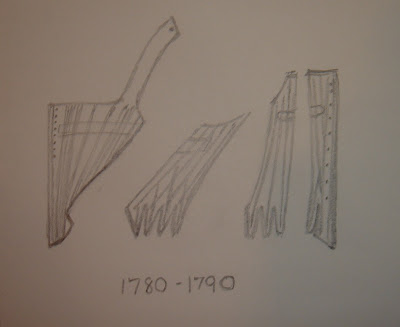 This is the pattern that I am currently building.  There are very few bones, so the ones extending into the tabs will be metal to keep them from stressing too much and breaking.  Notice the unusually wide horizontal bones, used instead of multiple bones.  The top front is also laced, but purely decorative.  The bottom half is still attached CF.  I'll place a gusset, like in men's breeches, behind.  The shoulder strap is also built in.  Since the waist is set high, the stays would try to slip down without them.
On a side-note, since this was brought up recently, front-lacing stays (partial or full) don't really allow you to breast-feed.  There are pregnancy stays with lacing on the side to expand the waist, but opening the boned front of stays is just not comfortable.  Some images exist of women pulling up above their stays, but most probably wore un-boned jumps or a quilted waistcoat.  Yes, formal events demanded formal stays, but most of that class probably had a wet nurse.
Posted by ColeV at 10:53 AM

Thanks for this post. I found it courtesy of AmericanDuchess. Your sketches and information really explain a bunch of things I wanted to know.

Very interesting post !
That was exactly what I was looking for, thanks !! :D

Fascinating! I found this courtesy of American Duchess. It's really helpful as I attempt my own pair.