I just got back from almost an almost three week trip- out to LA for a visit to Disneyland followed by a 15 day cruise to Hawaii.  I've always wanted to go on a cruise and wear nothing but 1930s-style clothing.  Somehow, crazy me decided this unusually long trip would be the perfect time.  I started pulling together patterns, ideas, and fabric in the fall and officially began sewing in January.  Much of the inspiration came from The Painted Woman in a number of posts specifically about cruise fashion in the 1930s.  I ended up making 4 dresses, 4 pairs of pants, a sports skirt/shorts, a linen suit, an evening gown, a sweater, 5 blouses, a hat, and 3 slips.  I tried to get pictures of most of it on the trip- I found a few things that slipped through the cracks, but I'll get those later.
I didn't get a good shot of travel day, but all but a white blouse shows up later.  So day number 2, going into the parks (it was a little chilly): 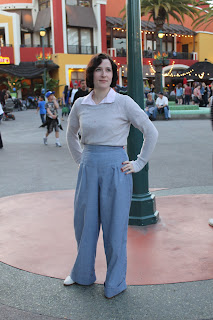 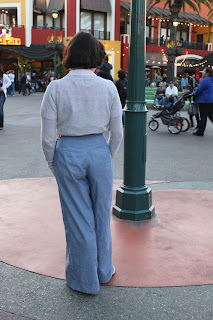 I made the trousers from Eva Dress' 1934 Lounging Ensemble pattern.  It's just a very lightweight cotton I had in my "Grandmothers stash".  The blouse will show up again- a white cotton with a red pinstripe from B&T.  The sweater was a last minute addition due to weather, so it's just a modern linen. 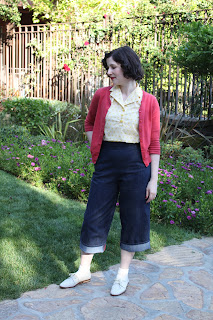 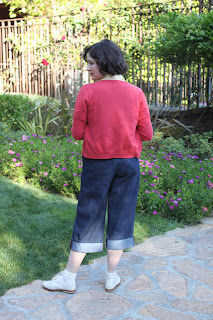 Day 3 was also in the parks.  I drafted a pattern for the trousers and made them from stash denim.  You can't see it, but the left side buttons up with red buttons, so I used red serging to tie it all in.  The blouse is a yellow printed cotton lawn from Jo-Ann's, accented by a few vintage buttons.  The shoes are one of the most comfortable pairs I've ever owned- part of the 1958 collection from Hush Puppy (resisting urge to buy red ones). 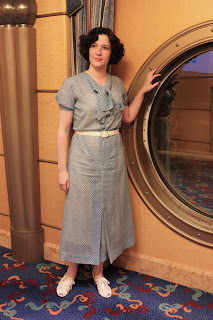 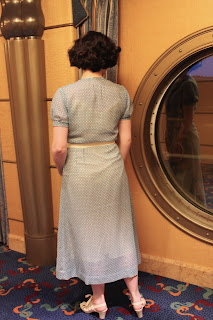 Day 4- first day on board.  The dress is a vintage blue print fabric of some magical content that acts like cotton but never wrinkles.  It was made from a VPLL pattern. 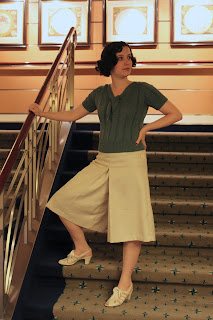 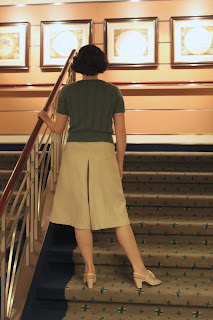 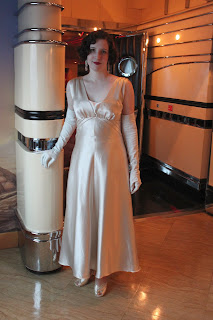 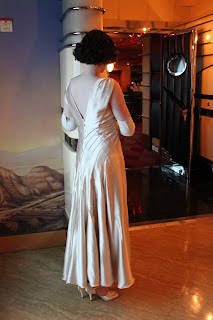 Day 5 was also the first formal night.  I fell in love with this dress from the Met.  I couldn't afford silk jersey, so I went with silk charmeuse instead.  There are five inserted pieces that flare out towards the hem.  They allow for shaping around the hips.  There's a narrow welt of contrast inserted in each seam.  I didn't order enough yardage, so to save I cut all of those  pieces in back cross-ways, meaning I couldn't do a longer hem.  Means I can dance in it though!  Which I did later in the cruise when we had ballroom dance classes/practice.  Also, don't ask how I made this thing.  I had three days and I still don't know how I managed to make it work.  A lot of guessing and hope.  I got to wear my wedding shoes again and the earrings are vintage- a gift from my husband for our anniversary last year.

I still have six more outfits to post about later.  And don't worry, there will be some pictures of lovely Hawaii as well.
Posted by ColeV at 12:37 PM

The evening gown is exquisite! You have such a great eye for styling. Thanks for sharing all your cruise creations!

what a beautiful creation! I love this Elizabeth Hawes dress ! a friend showed it to me and ask me to make him a similar dress for her wedding. Would you have a pattern for this dress or a reference to me?
I leave you my email in case you would be kind enough to give me this information: estherelia@wanadoo.fr
Thank you in advance!
And congratulations for your work, this is our wonderful!